A menu that blends the rural spirit and memory. The SanBrite restaurant in Cortina d’Ampezzo finds its home in a former barn 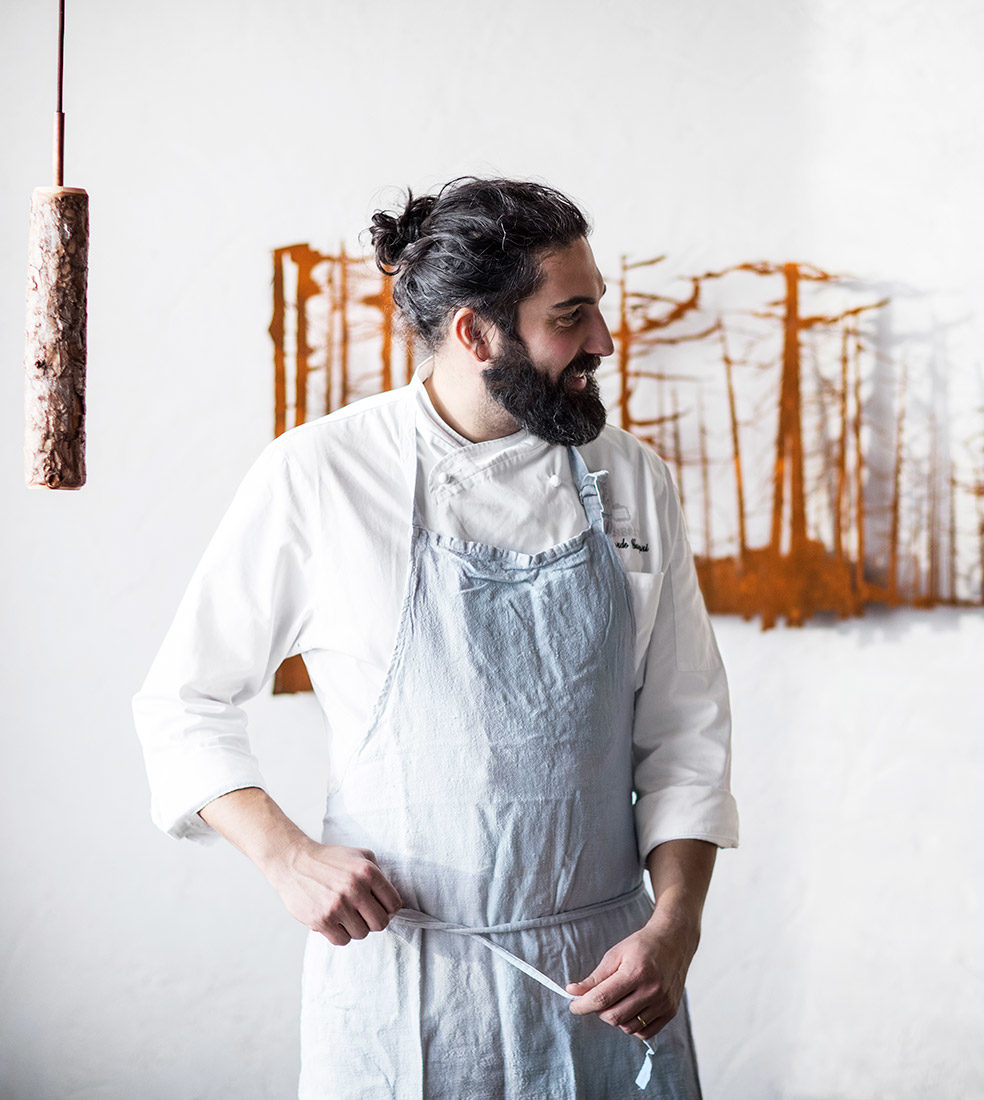 «Rural, but without making memory a constraint». This is the first sentence that chef Riccardo Gaspari, owner of the SanBrite restaurant in Cortina d’Ampezzo, uses to talk about himself, his intentions, his passions. From the Dolomites comes a lesson in cuisine, and perhaps more, a life choice intimately tied to the mountains, to the genuine flavours of its products and the concept of legacy as a heritage of knowledge passed down from generation to generation. The atmosphere that surrounds SanBrite – which in the dialect of Cortina means “healthy malga” – is dense and filled with emotion, in which every aspect has a specific role: from the atmosphere that surrounds the diner in a dimension that blends contemporary and traditional, to the aromas that lead the imagination into the forests, to the reception, warm and courteous, to the history of the family and its dedication to the magical experiences created just for their guests. Riccardo, who is just over thirty, looks very determined and sincerely engaged in his “agricuisine” experience, run in perfect synergy with his wife Ludovica Rubbini: « We live near the forest, near our cows» explains Riccardo.

We worked from our rural daily life, where we find the ingredients of memory to build our legacy.

His first experience dates back to 2004, when he began to work at El Brite de Larieto, the alpine agritourist farmstead which he owns and where he is the chef, offering dishes prepared with the products of the family’s farm (meat, cheese and cured meats). In 2012 he founded the Piccolo Brite, «where we make cheese with the milk we produce ourselves, hand-crafted butter, cheeses and yogurt». Between 2013 and 2016, he began to receive his first acknowledgments, and from April to May and September to December went to work at the Osteria Francescana in Modena, for Massimo Bottura. In 2016 he founded the Brite Mobile, literally a mobile kitchen that makes it possible to eat outdoors, among the peaks of the Dolomite mountains. A unique and exclusive experience, that evokes strong emotions in contact with the mountainscape. 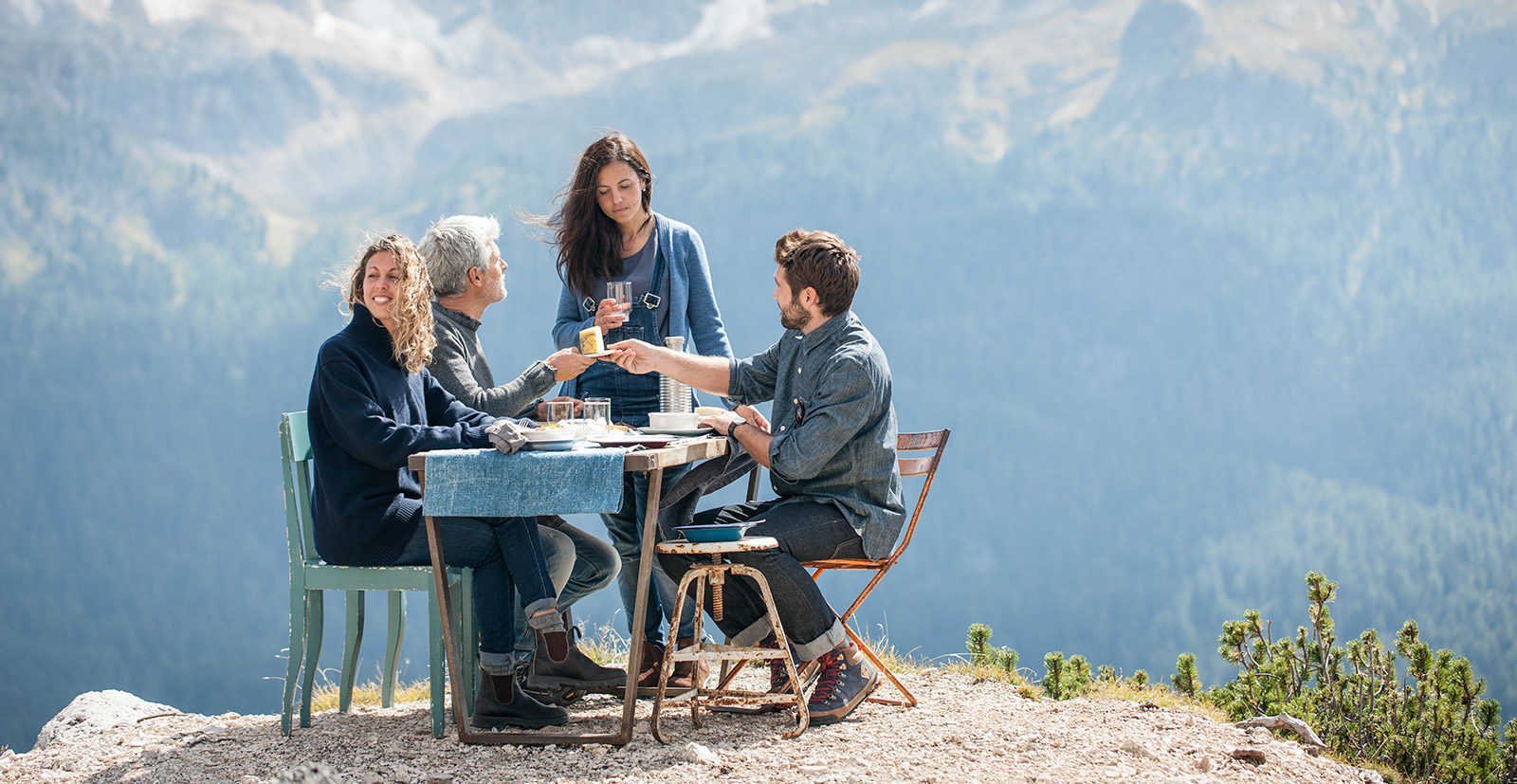 In 2017, finally, he opened SanBrite, «the restaurant where cooking means transforming the smells of the forest into an experience for the palate and the soul», says Riccardo, who together with his wife, originally from Bologna, has chosen to remain here in his mountains and cross-pollinate the consolidated terrain of his memory with the unexplored regions of the contemporary. «The territory is soil, air, water, climate, but it is also language, dialect, religion, craftsmanship, architecture, landscape», reveals Riccardo.

The ingredients I select are strongly linked to the territory understood not only as a physical space with its own climate and environment, but also as a cultural and historical context, first and foremost my own.

«Rurality and memory keep me firmly anchored to the ground, but I need to take it a step farther, I need to add the present time to the dishes I present». And his recipes do indeed express his goal, for example the “Spaghetti with garlic, oil and hot pepper with the balsamic scent of mountain pine resin” or the “Snails with herbs and crunchy topinambur”. 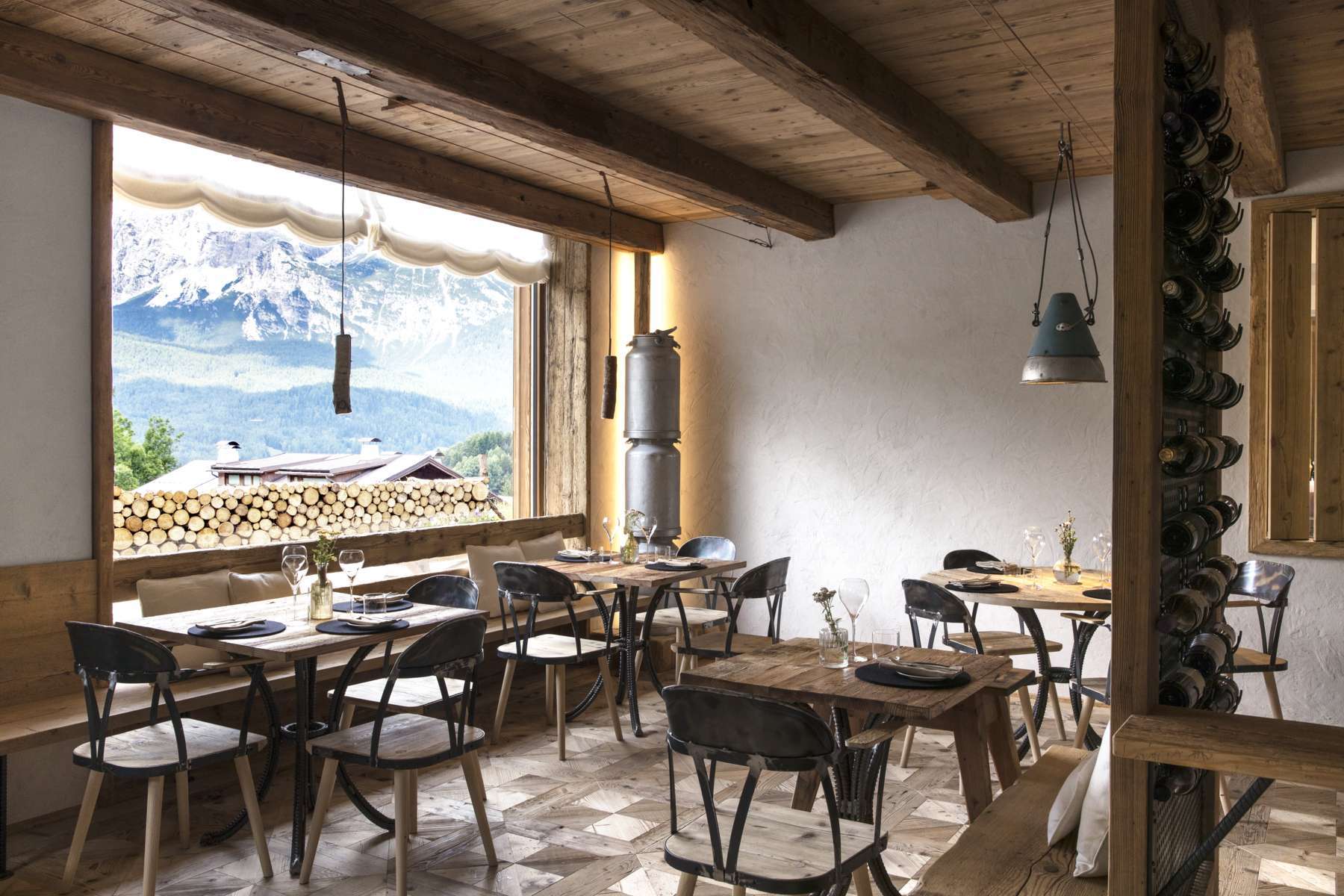 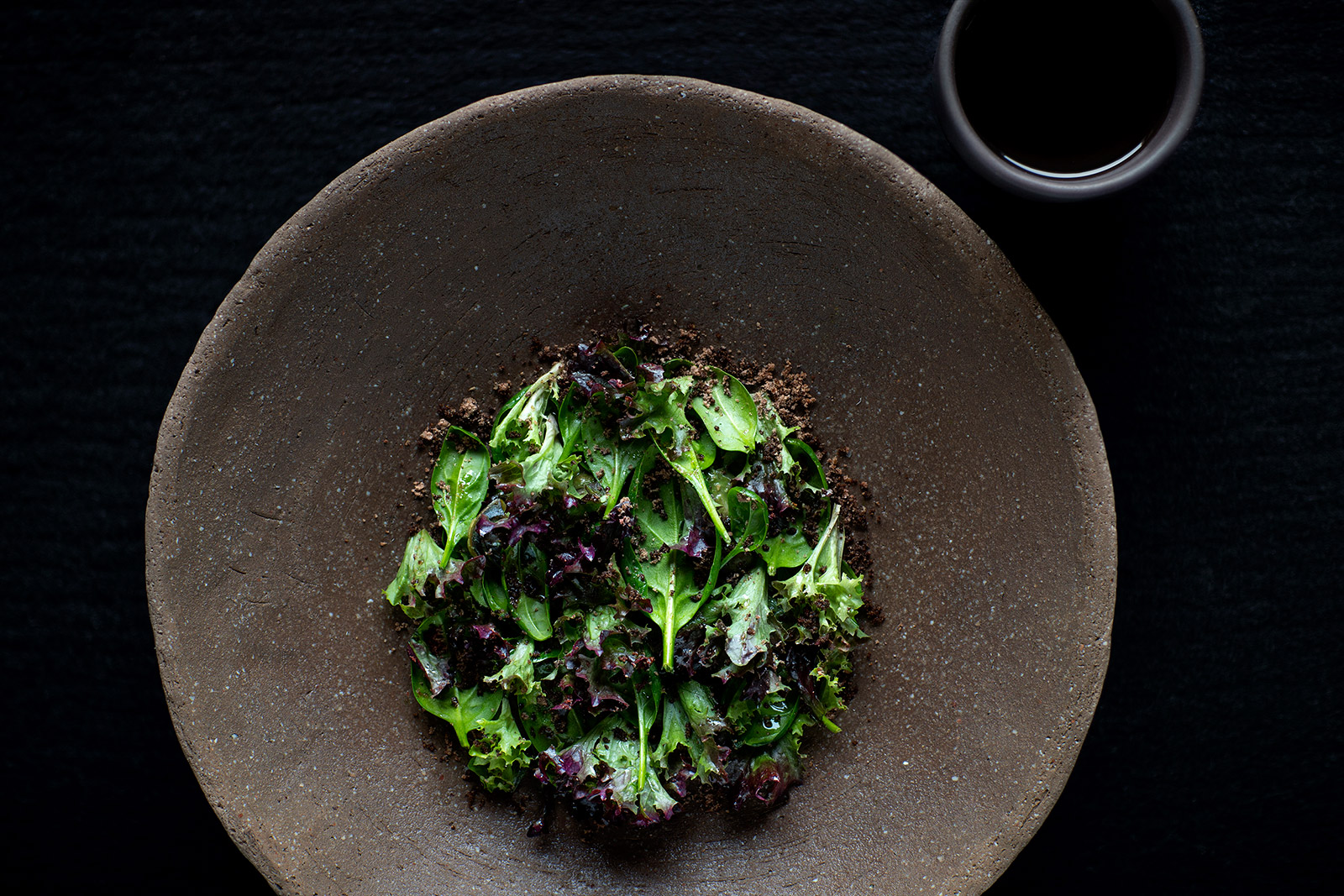 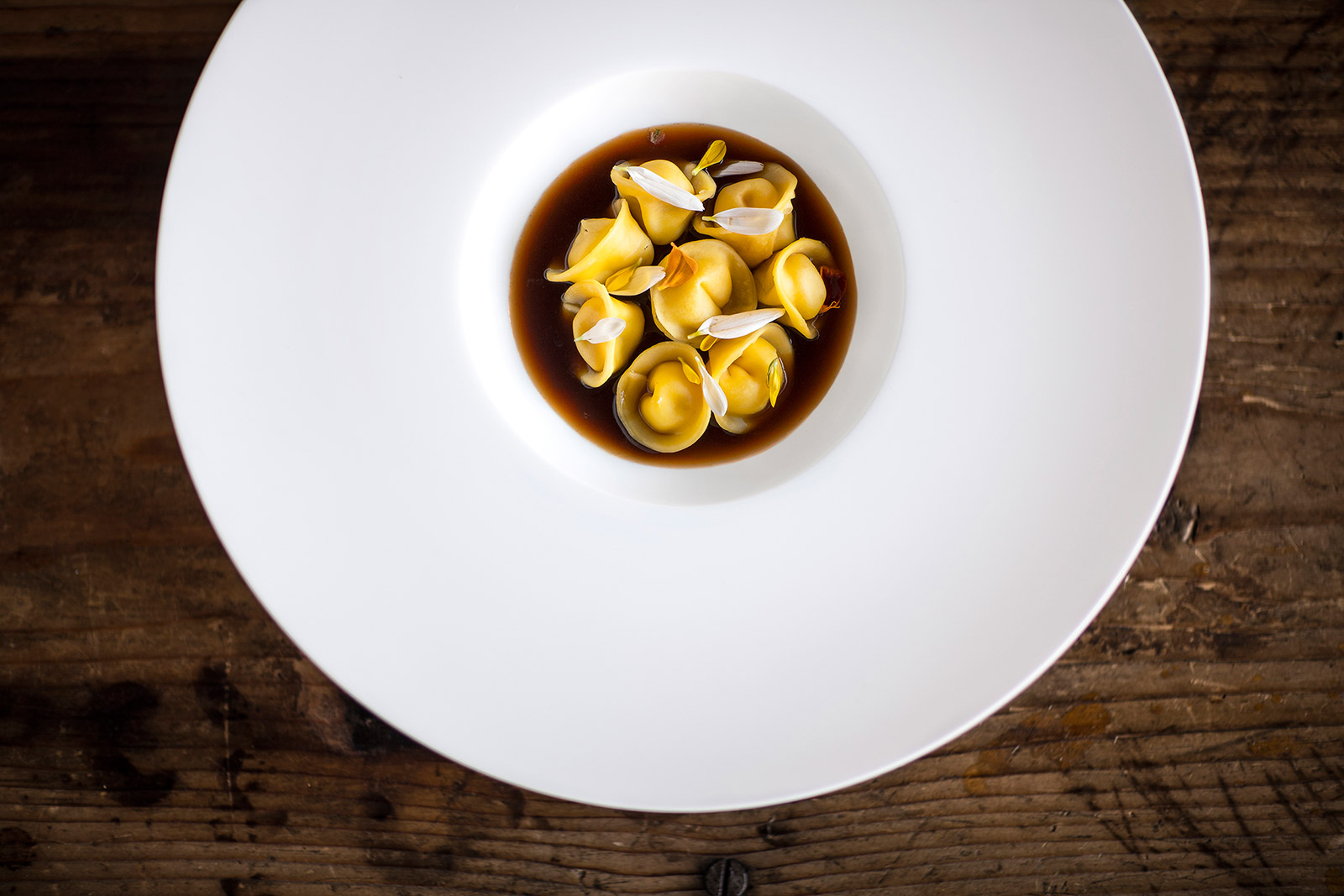 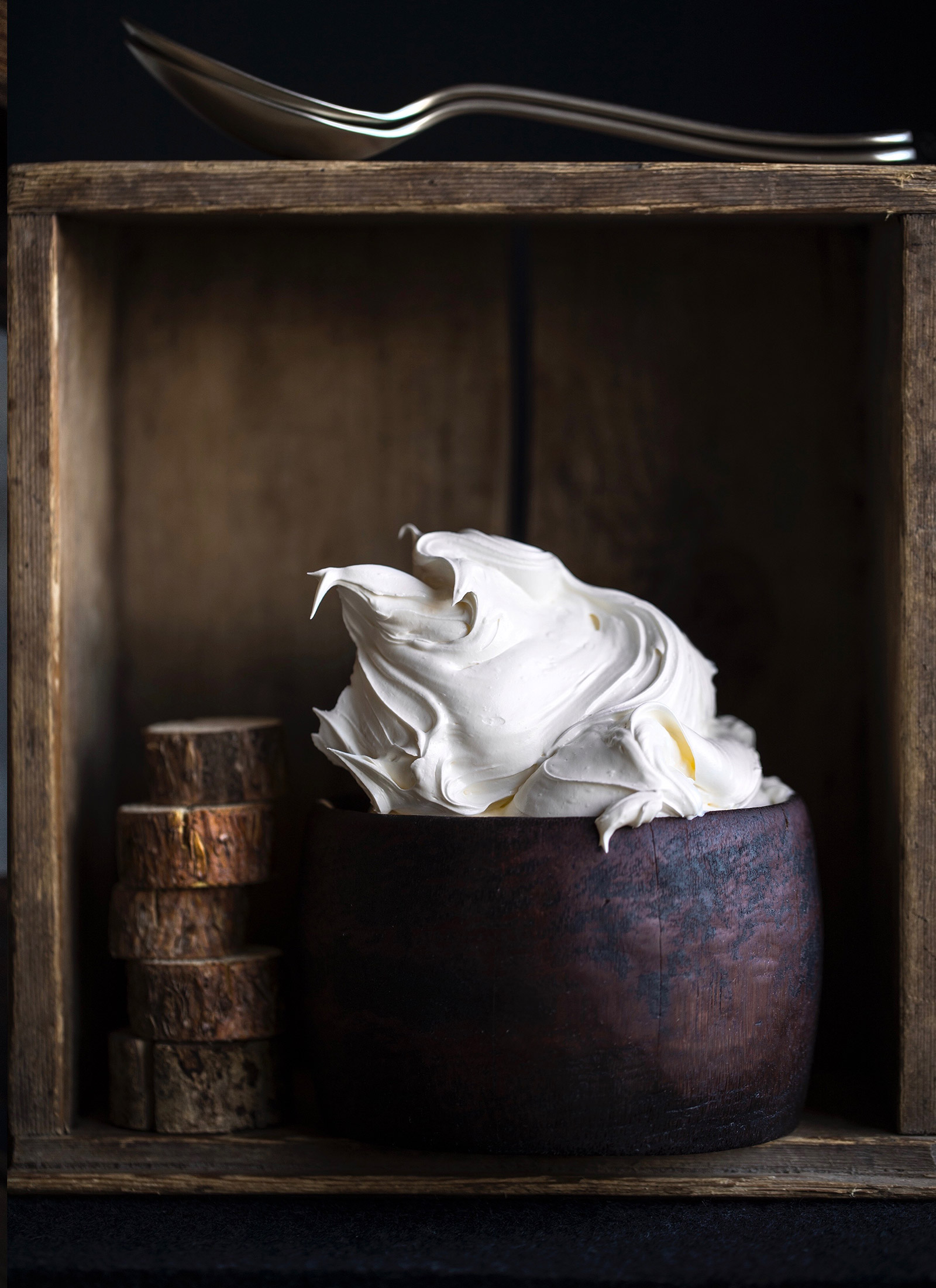 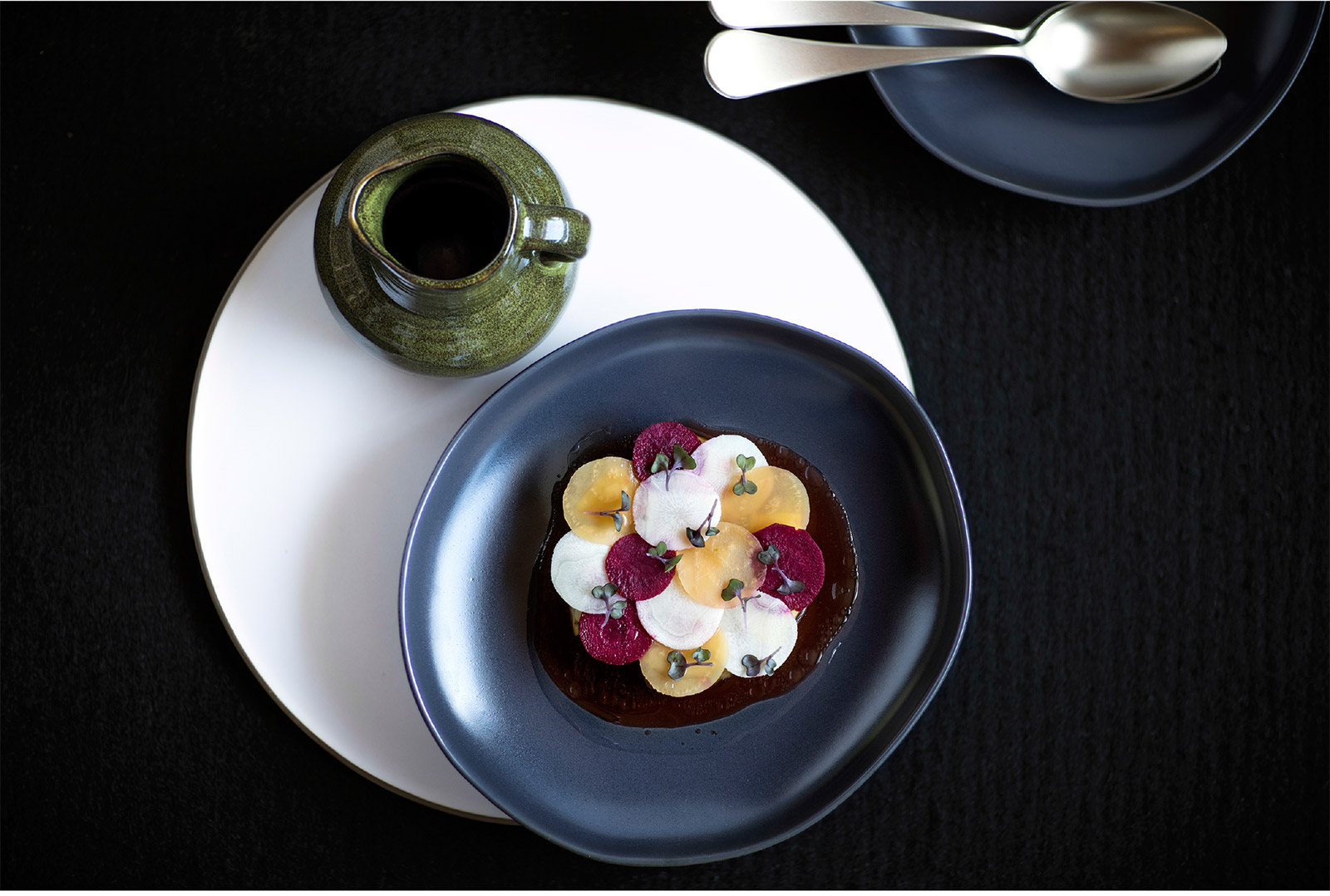 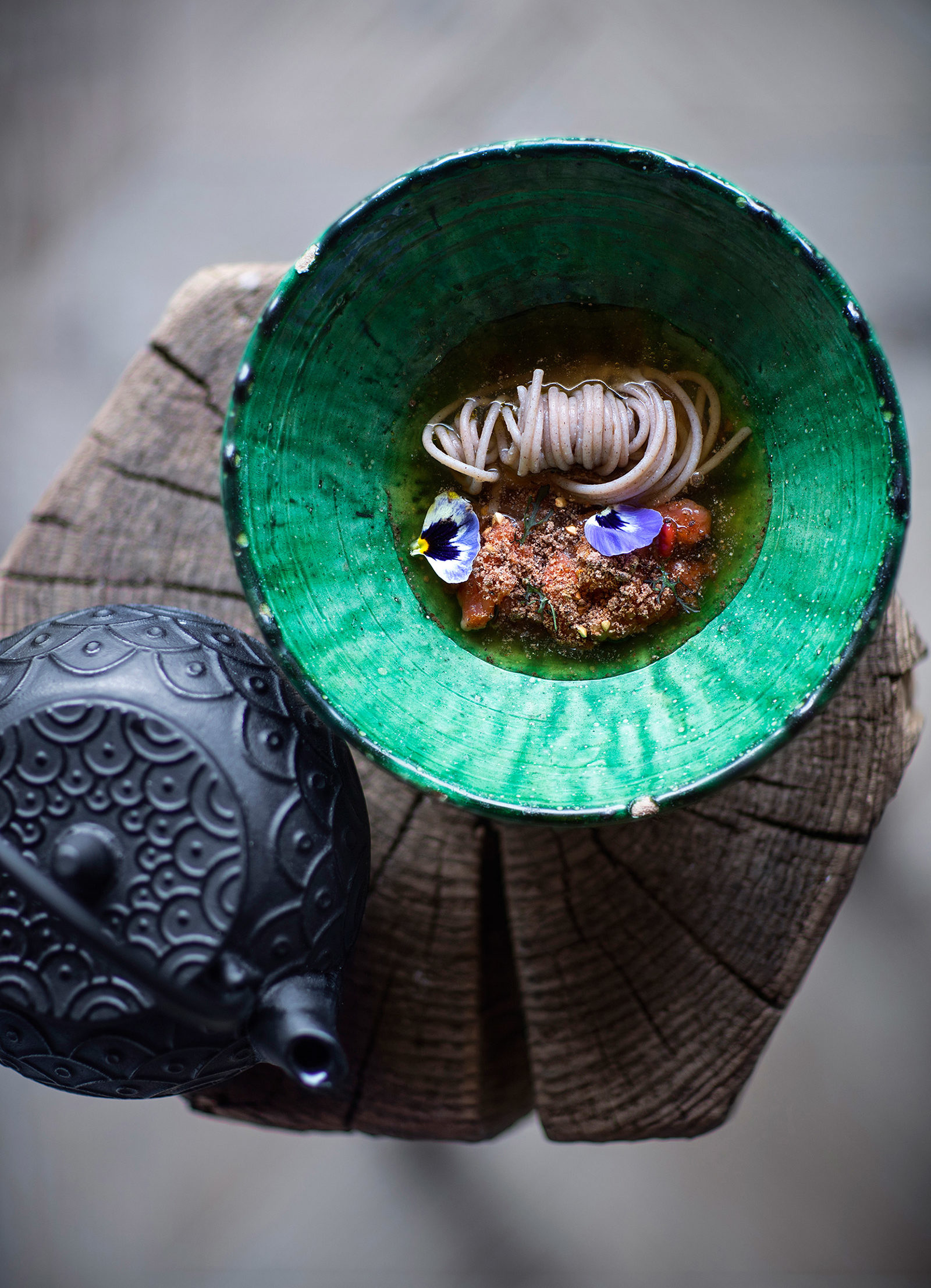 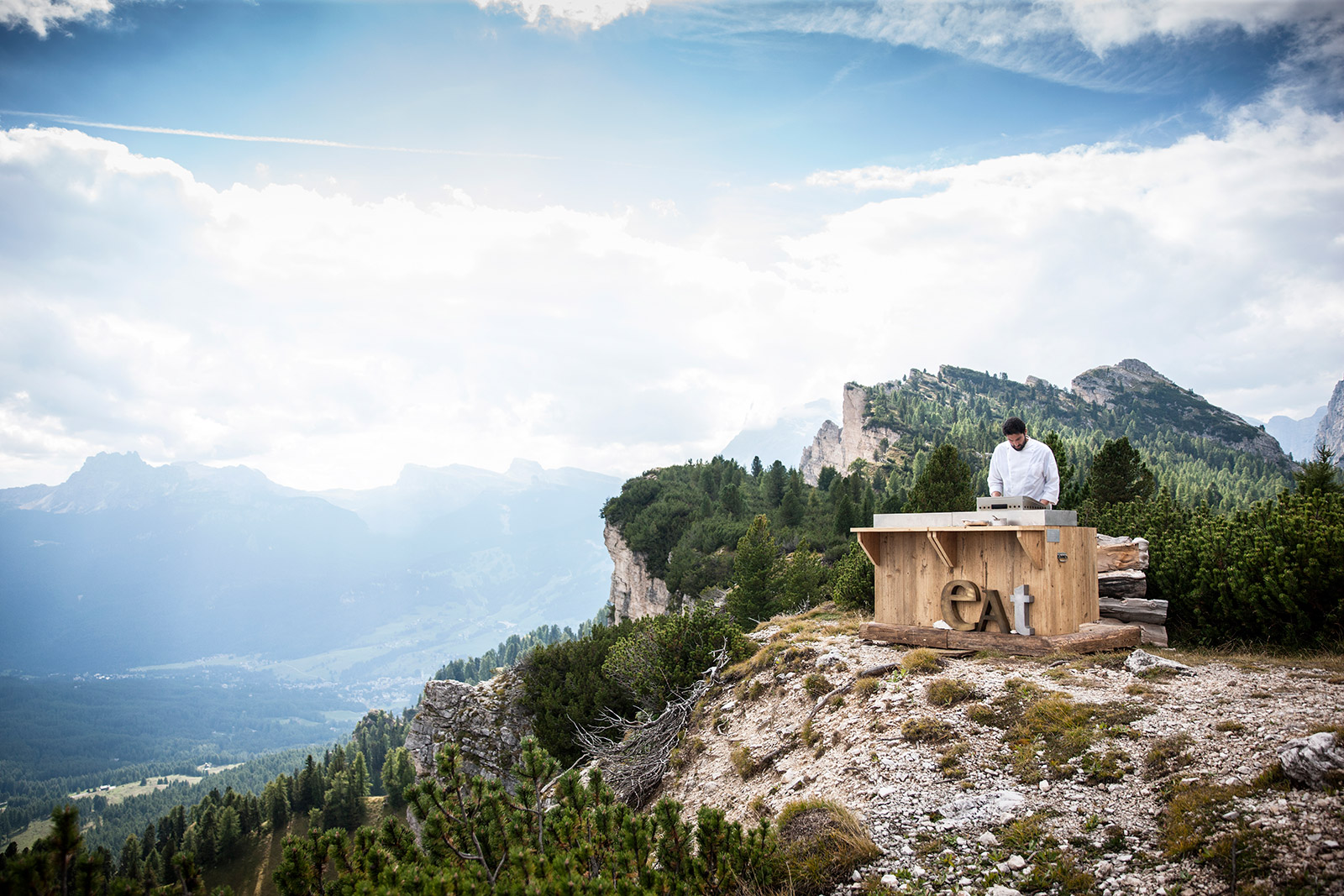 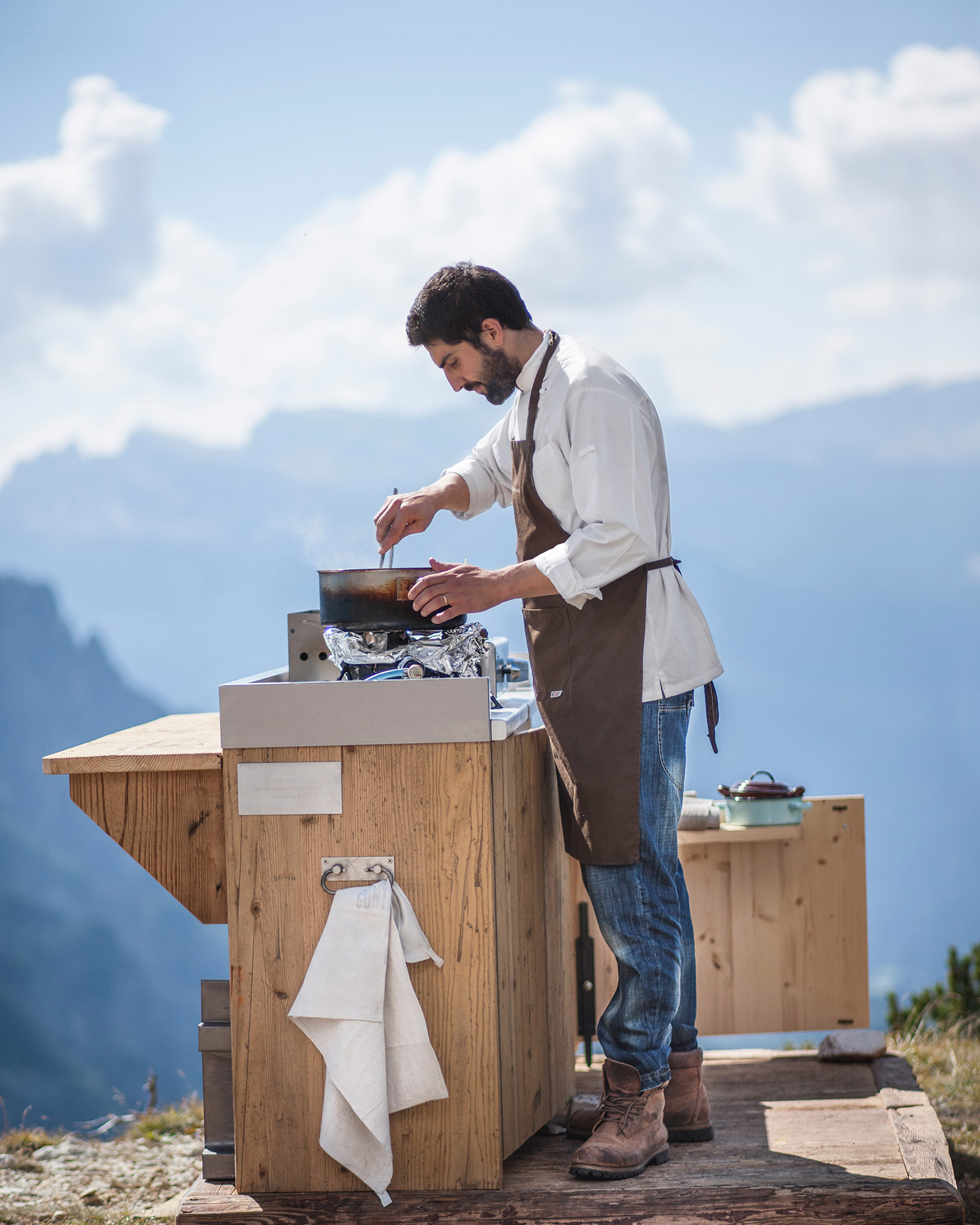 The restaurant is located inside a former barn, which was restored by architect Fabrizio Luchetti working with interior designer Rossella Reale and a craftsman, Christian Menardi. Riccardo and Ludovica were very impressed with the project. They feel it to be an expression of their own selves: «In the SanBrite, they helped us write our personal biography in the wood, fabrics, architectural elements and obviously the personal objects». The chairs and tables are made of metal and wood. The lamps are branches of larch, birch and fir trees. «Reminiscent of the street lighting on Corso Italia for the 1956 Olympics. Made of tin, like the milk cans, and blue, like Cortina», they explain with satisfaction.

Porsche Experience Center Franciacorta, the value of driving on the circuit