Architecture and cities can be “served at dinner” in ways that are anything but conventional. They become the themes of plates, serving plates, bowls, cups and teapots that can build original scenarios for lunches and dinners of all kinds. In the 1970s, the theme had already been addressed by Florentine architect Remo Buti (originally a ceramic artist) who presented “Plates of Architecture”, the collection that features the drawings of designers such as Michael Graves or Alison and Peter Smithson. The idea is still alive today and is concretized in a number of series made to enliven the table with culture as well as fine food.

The most recent include “Con la cultura si mangia” by the firm 23BASSI in Milan, a collection with a provocative and irreverent title inspired by the Italian artistic heritage. Based on some of the most representative icons of Italian art and architecture, Chiara Frigerio and Andrea Roscini, founders of the studio, reproduce some of the most characteristic features of the selected works on plates, tablecloths and glassware, with a captivating contemporary graphic design.

The Scrovegni Chapel in Padua, the Duomo in Milan, the Castello di Sammezzano, the Pantheon in Rome and the Fontana Maggiore in Perugia are the first five subjects they took in consideration

And so, for example, the famous star-studded vault of the Scrovegni Chapel may be found in a midnight blue plate flecked with stars, just as the geometric repetition of circles and squares on the floor of the Pantheon fills not only the plates, but a tablecloth as well. 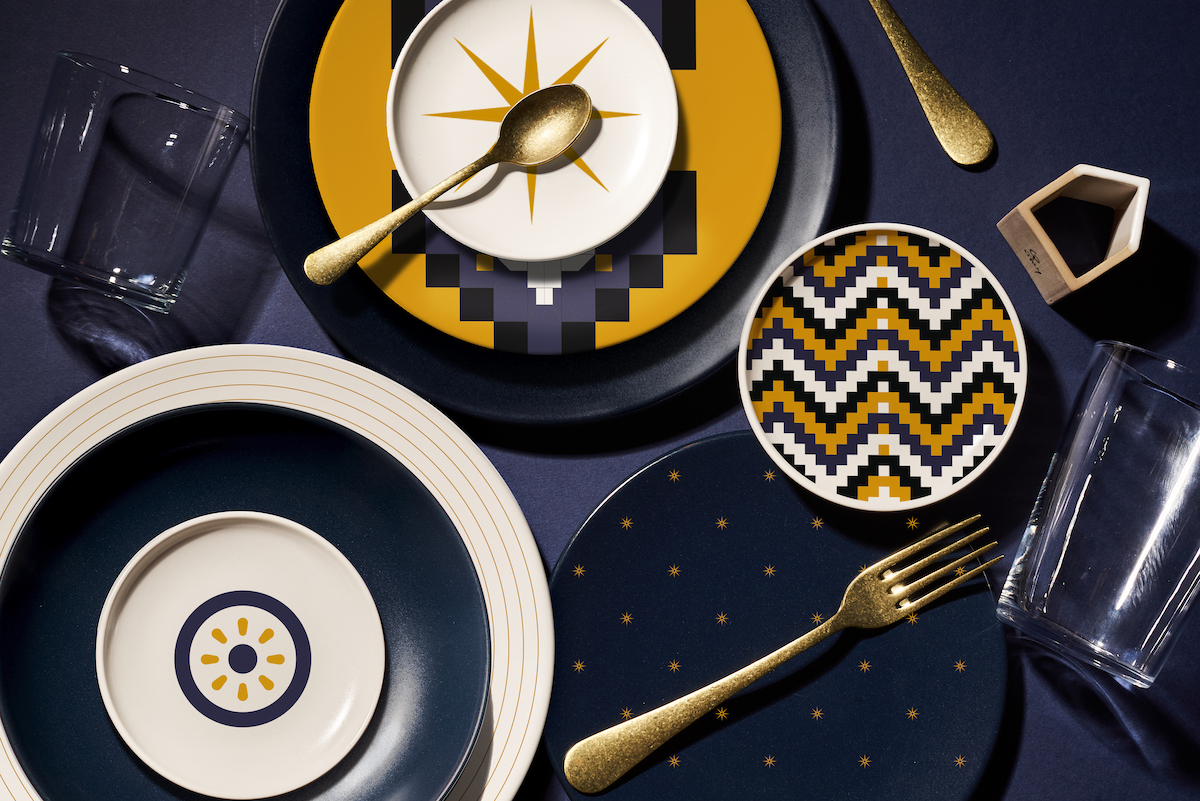 The Renaissance on the other hand is the period chosen for “Palace”, the collection conceived by designer Alessandro Zambelli and manufactured by Seletti. Based on a modular programme for the table, stackable and compact, each palace reproduced in miniature consists of bowls, plates, dessert plates and saucers, each of which is decorated both inside and out. Disassembling and exploring each palace gives you the impression of visiting it one floor after another. And seeing that to actually do it would require the keys to their doors, Zambelli also designed flatware in a shape reminiscent of keys from the same historic periods. Each level constitutes a plate and represents a plan: the ground floor first, then the first floor and so on. The roof? Turned over, it becomes a serving dish! 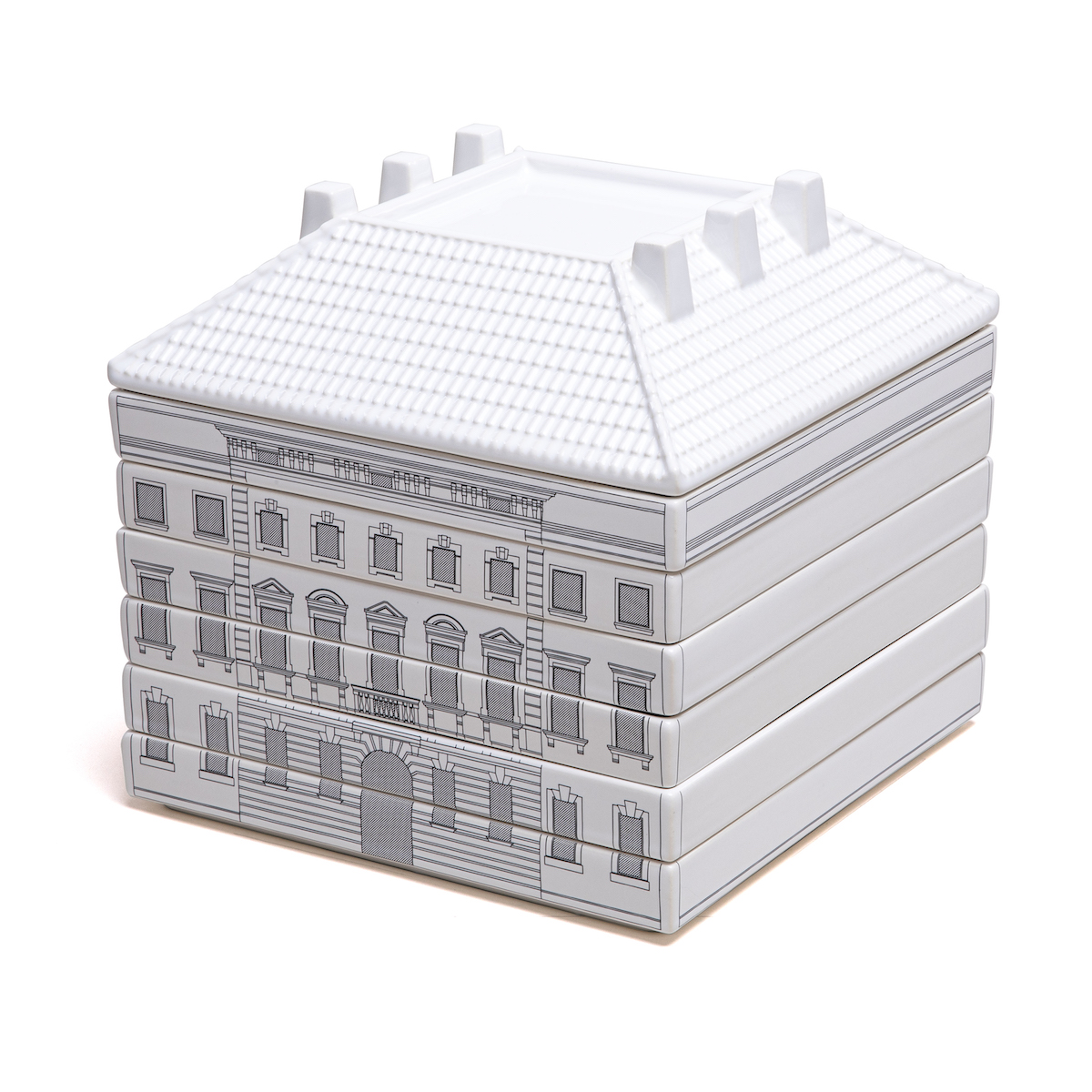 Sicilian Baroque is the theme of BaroqEAT, the collection of twelve plates conceived by architect Salvatore Spataro and produced by Le Porcellane – Firenze 1948. In this case, decorating the tableware, with the help of decals, is a selection of the central-plan Baroque churches in Noto, Catania, Caltagirone, Messina, Mazara del Vallo, Niscemi and Alcamo. The series is available in two versions: black and white or white and gold. 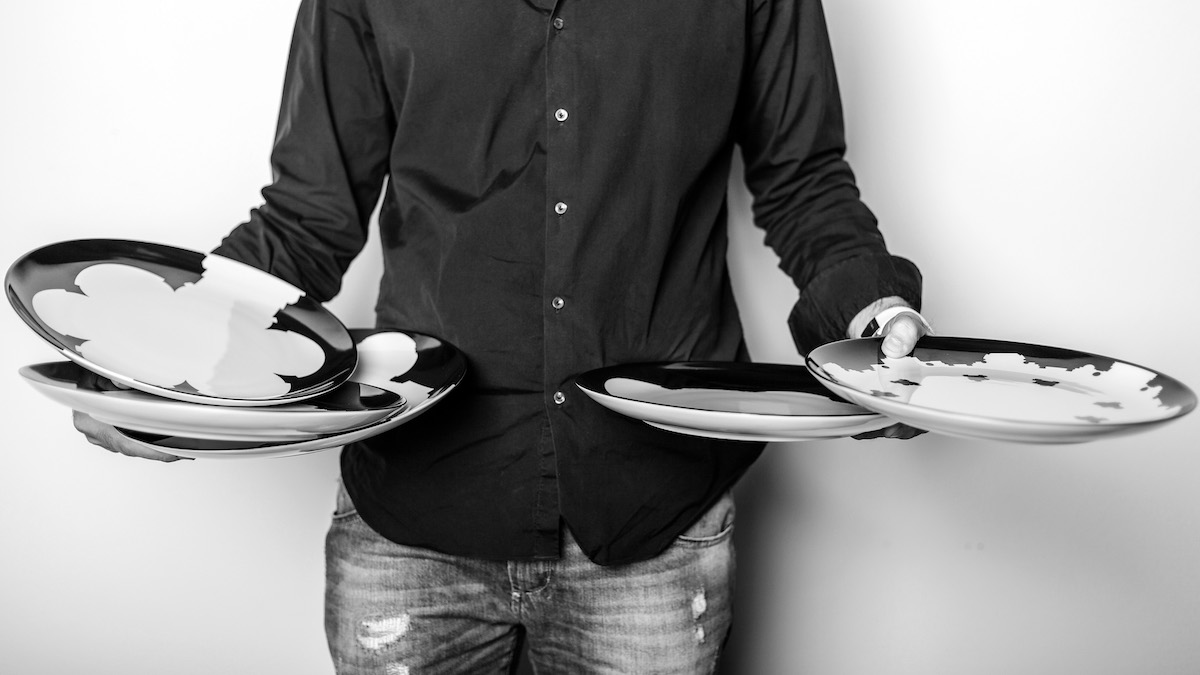 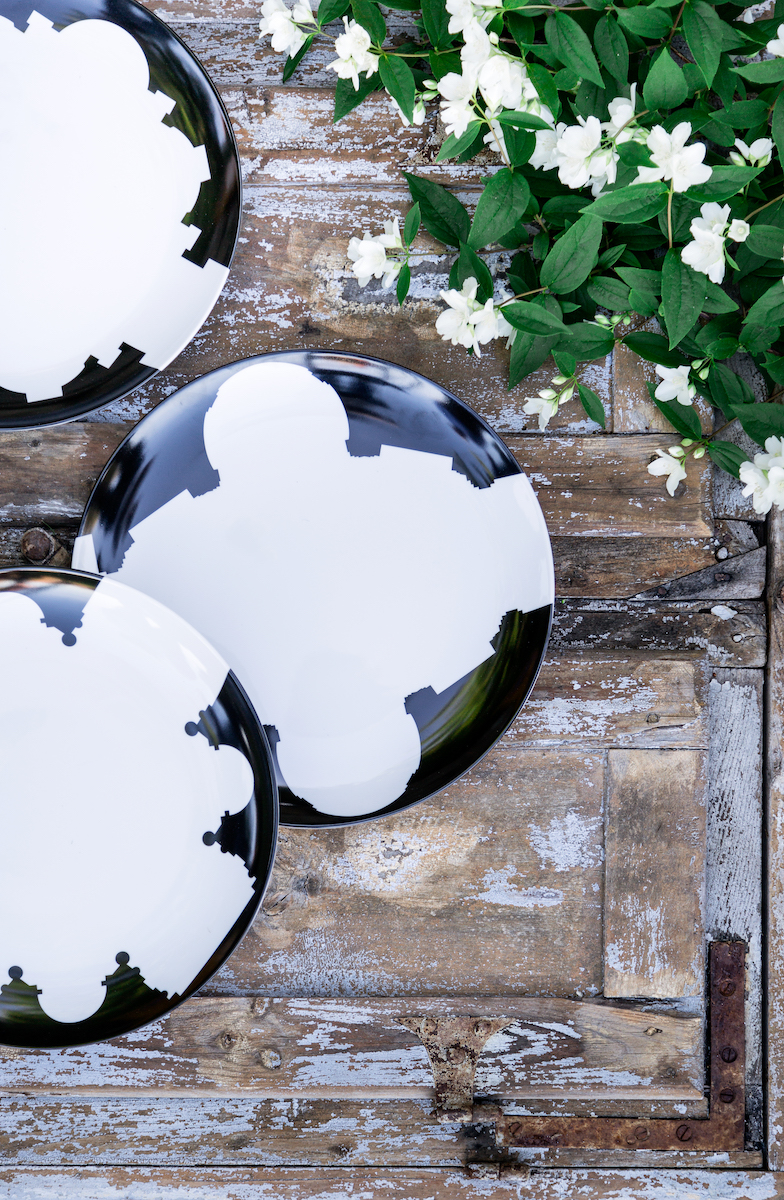 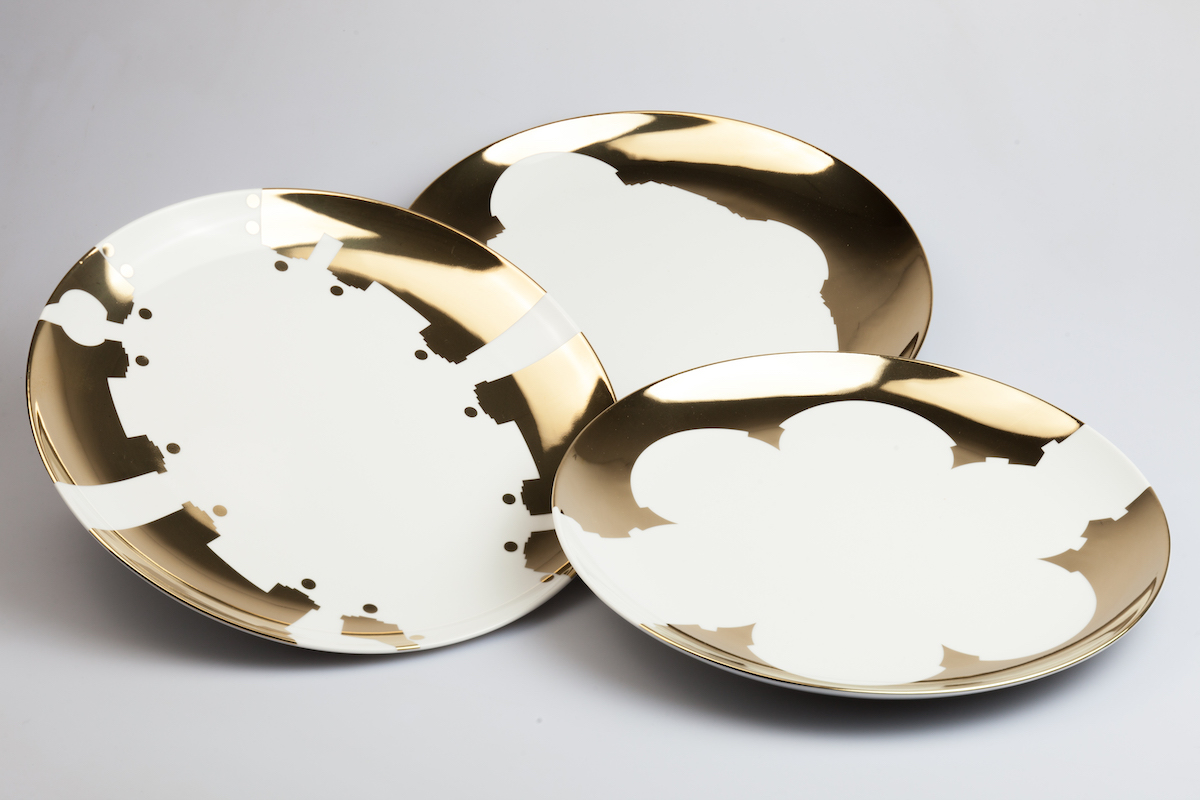 Another series from the island is “I Siciliani”, a series of trays and serving plates produced by Trame Siciliane, the inspirations for which range from architectural references to typical decorations. The collection involved seven young Sicilian designers who created seven series. They include “Grand Tour” by Gabriele D’Angelo, in which the trays and serving plates are decorated with the illustrations of posters dedicated to Sicily and published in the 1920s by the National Agency for Tourist Industries. Another collection is titled “Borghi Sospesi” by Officina 77, which reproduces views of landscapes, streets, towers, castles, belltowers and palaces, as well as simple homes and craft shops of Sicilian memory, suspended in time and space. And “Basole”, also by Salvatore Spataro, which recall the variety of the richly decorated ancient floors of Noto. The trays, available in two sizes (ø20 and ø30) are made of ash wood with a soft-touch, sure-grip finish. 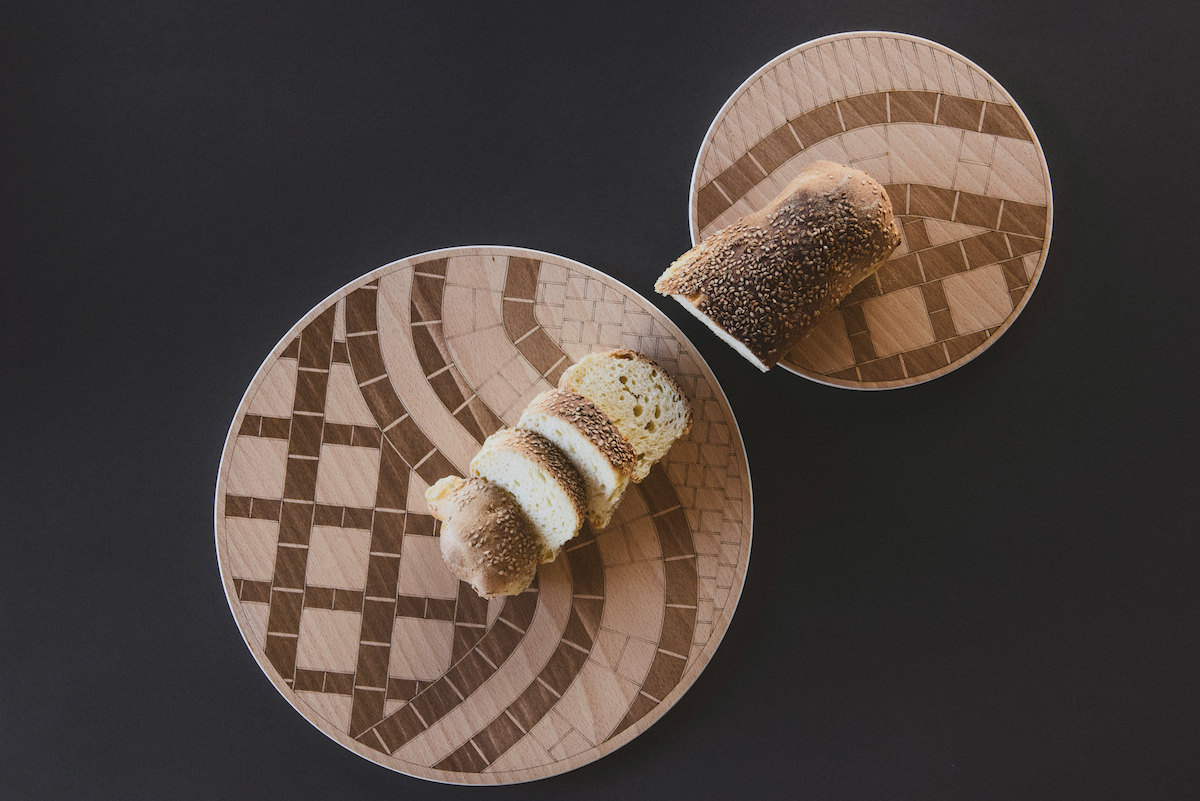 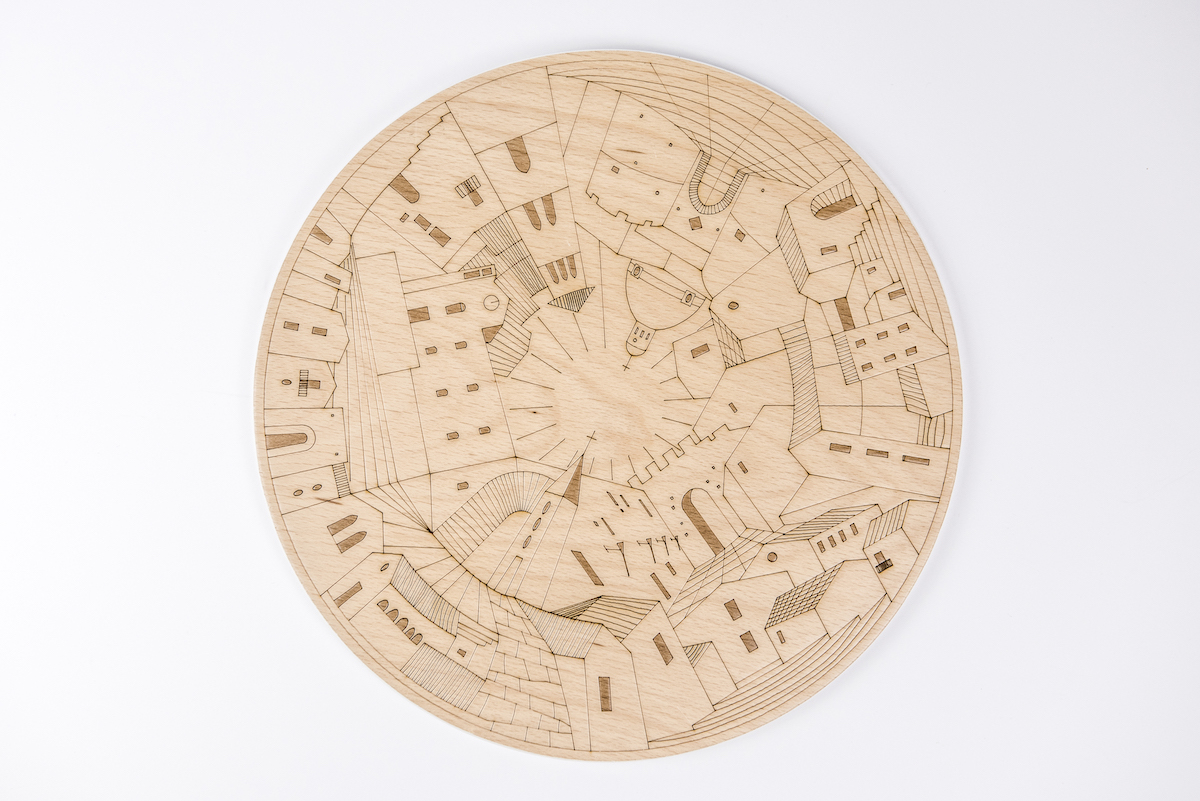 Peering beyond the borders of Italy and looking abroad, “BIG Cities” is the collection of tableware designed by Danish firm BIG – Bjarke Ingels Group & Kilo Design for the TAC by Rosenthal set, which blends tradition with innovation. In antique blue on a white porcelain surface, the pieces portray the skyline of some of the most famous cities in the world with a minimalist graphic design, cities such as Berlin, Copenhagen, London, Paris and New York, with their most significant monuments, including the Brandenburg Gate, Big Ben, the Eiffel Tower. An invitation to entertain pleasant dinner-table conversation about travels past and future! 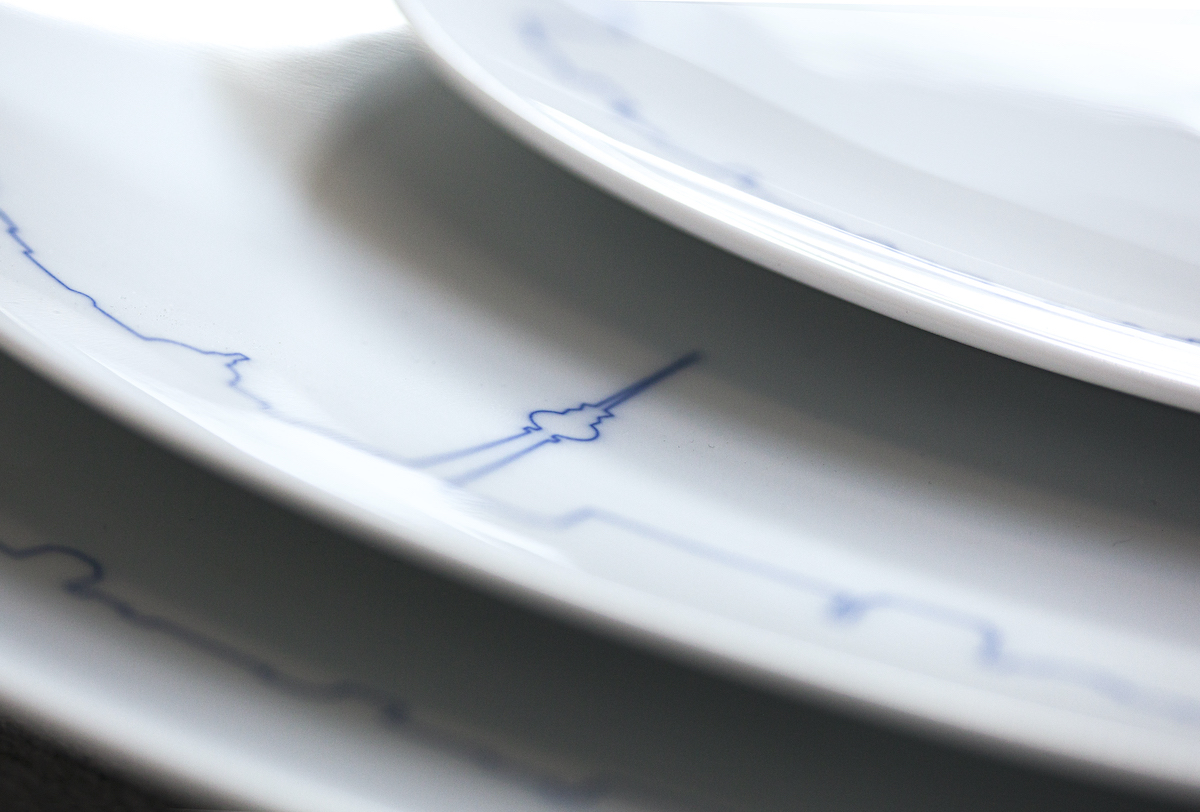 Milan is not just an apéritif: from brunch to CityLife to the curative drinks at Porta Romana