In the special issue of the magazine dedicated to Italy and published by Gruppo RCS, a focus on the city and its events, shows and lesser-known locations

Rome and tourism, a winning combination that finds its greatest synthesis in the city’s most important monuments such as the Colosseum, the Vatican and the Forum-Palatine area. But the Capital has much more to offer, thanks to its vast heritage which is just waiting to be cultivated and understood by the greater public. One example? The Ara Pacis, an altar built at the end of the I century B.C., has been brought back to life thanks to augmented reality, which makes it possible to see the spray of colours that once enhanced the marble forms. Furthermore, little is ever said on the matter, but Rome is a city tailored to families as demonstrated by Explora, the Children’s Museum just a few steps away from Piazza del Popolo, and Technotown at Villa Torlonia. There is also a rich artistic scene with exhibitions of paintings in Renaissance buildings and classical and modern plays staged in fine theatres such as the Teatro Argentina or the Teatro India, important venues of the indie scene.

The year 2019 in the Eternal City will open with a New Year’s party the heart of which will be at the Circo Massimo, but which will extend throughout the city of Rome with events, performances and art exhibitions. 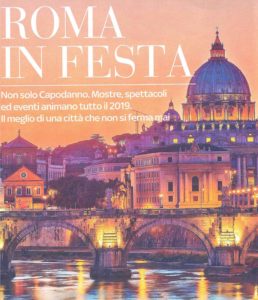 Cover of the insert “Roma in Festa”

«We embraced the idea of “Roma in Festa” not just to launch the diffuse New Year’s that the Capital is getting ready to celebrate – explained Simona Tedesco, the managing director of DOVE – but also because we intend to use the events on January 1st as a springboard to take visitors along new itineraries. There are many elements that we hope to highlight, to bring out of the shadows: a myriad of exciting projects, contemporary realities that can be experienced with the family, and shopping streets that do not pale in comparison to the more famous streets in Milan, Paris and London. To be more specific about this special edition of the magazine, we like to call it an innovative app. The reason is quickly explained: you don’t need to download it, it doesn’t require electricity and it fits in your pocket. On the back is all the information you need to enjoy a new narration, something the city truly needs. Our goal was to shine a light on destinations and suggestions beyond the major classical monuments. Because, is or isn’t travel an experience?»

The insert is filled with alternative routes that range from art galleries to shopping streets, and include events in the city’s squares and places that will entertain the entire family. Are you interested in visiting the Bohemian district in Rome? Here is a description of the labyrinth of streets between Via del Governo Vecchio, Via del Pellegrino and Via di Monserrato. Do you want to take home a souvenir that isn’t the same old miniature Colosseum or Vatican? Just read the section dedicated to “made in Rome”, with a focus on the area of Via dei Serpenti and Via Urbana. 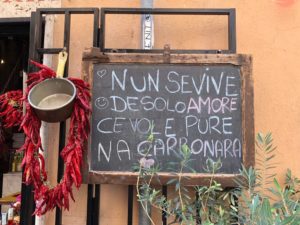 And of course there is a focus on the relationship between the Capital and its river, the Tiber. Summer outdoor cinema and small clubs open from June to August, the possibility of taking bicycle rides or jogging along the riverside for people who can’t go without sports, or a cruise to admire the beauty of the city from a different point of view. All presented with a direct language and layout that aim to inform rather than tell stories, arising from the inclination to be a service magazine about useful news, not just beautiful things to see.