Culture, tradition and experimentation for the recipe that is an Intangible World Heritage

January and February are the months in which we celebrate one of the most beloved dishes in all the world: pizza. The recipe originated in Naples in the eighteenth century, and has been enormously successful, to the point that UNESCO declared it an “intangible world heritage”. Pizza gratifies everyone’s palate, because it knows no age, credo, religion or gender: it is universally loved especially when it is shared – something that has become a trend in recent years – it brings together people’s souls and tastebuds.
Pizza is so popular that the world celebrates it twice a year: on January 17th with “La Giornata Mondiale della Pizza” (a date chosen in honour of Sant’Antonio Abate, the patron saint of pizza chefs) and on February 9th with “World Pizza Day”. For the occasion, Pantografo decided to tour Italy, driving up the boot from South to North in search of some of the finest pizzas around. 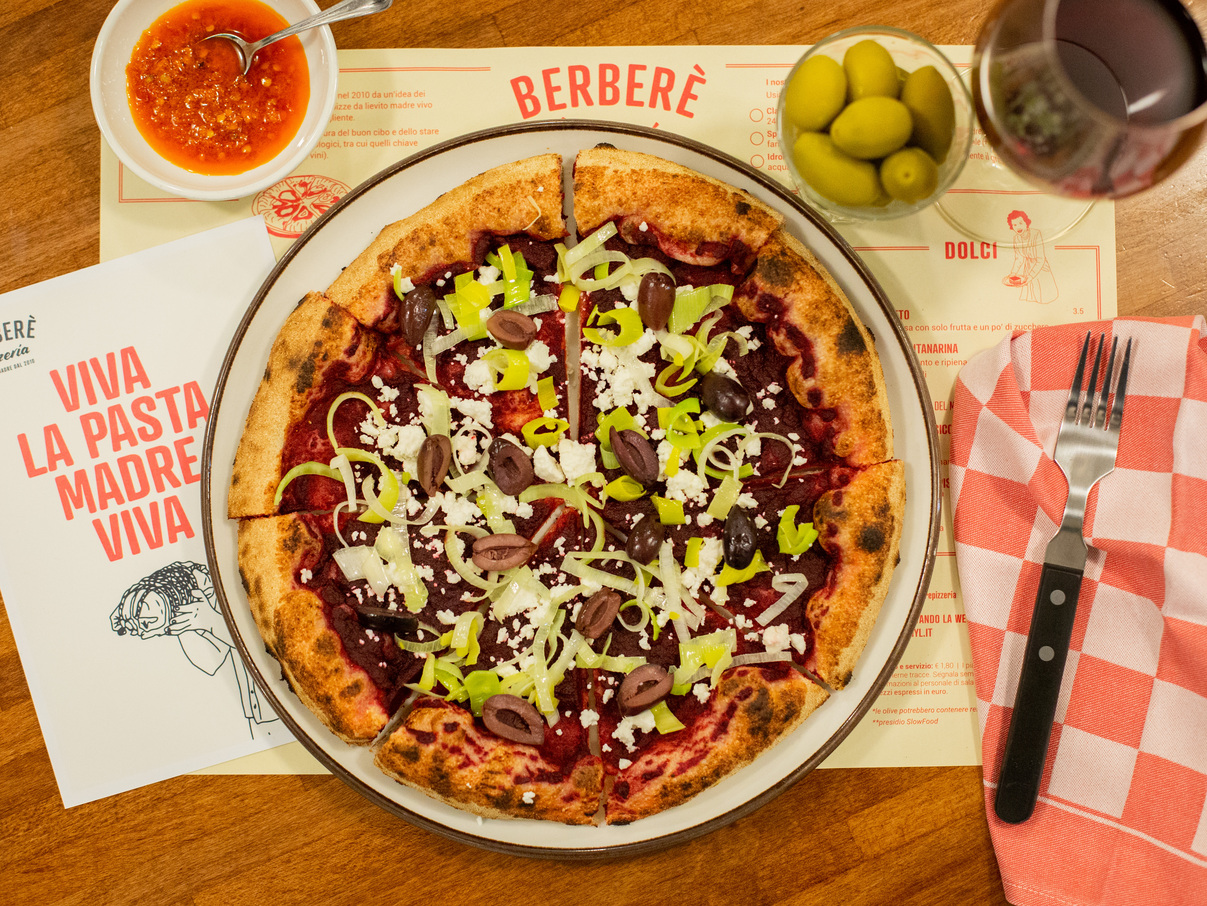 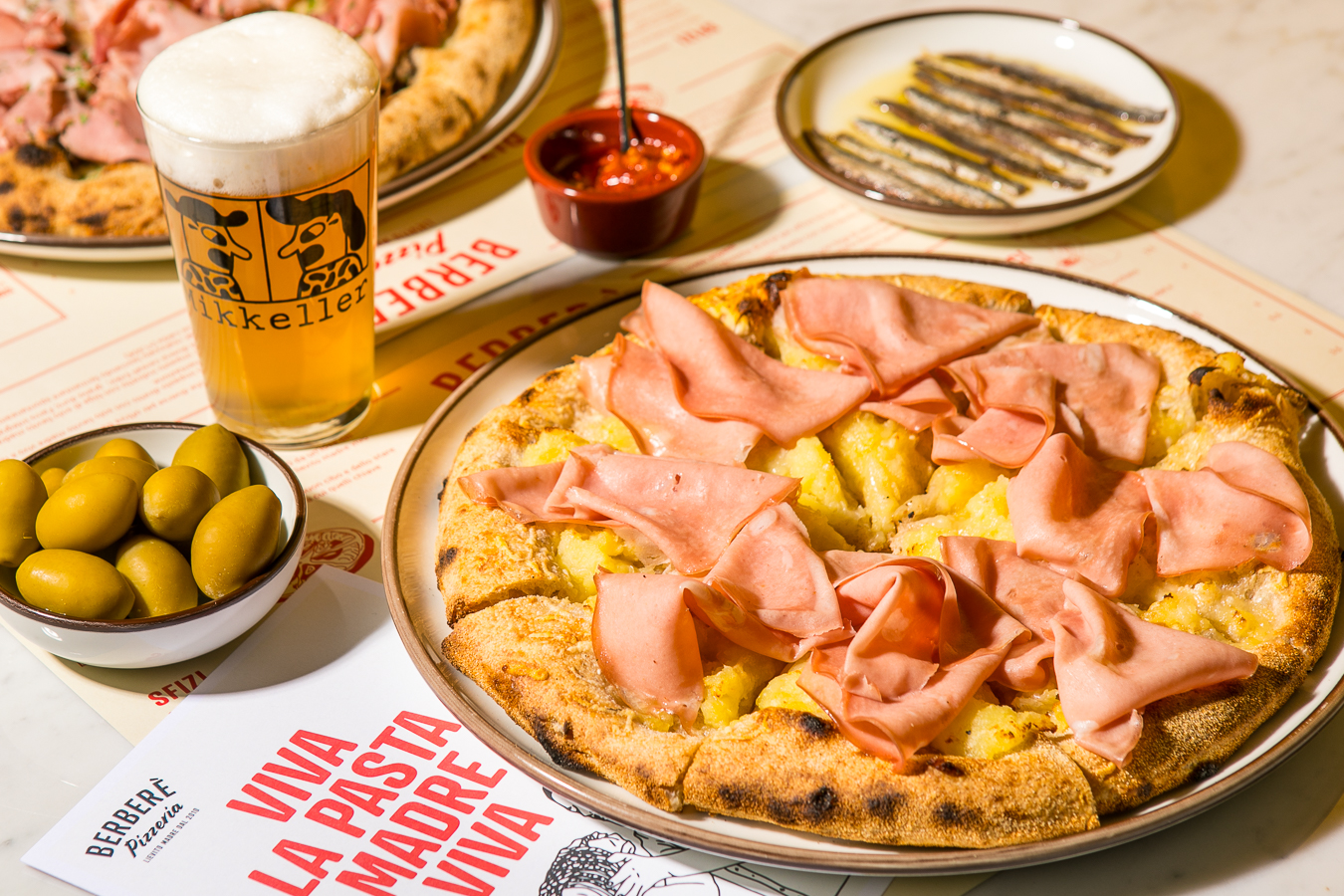 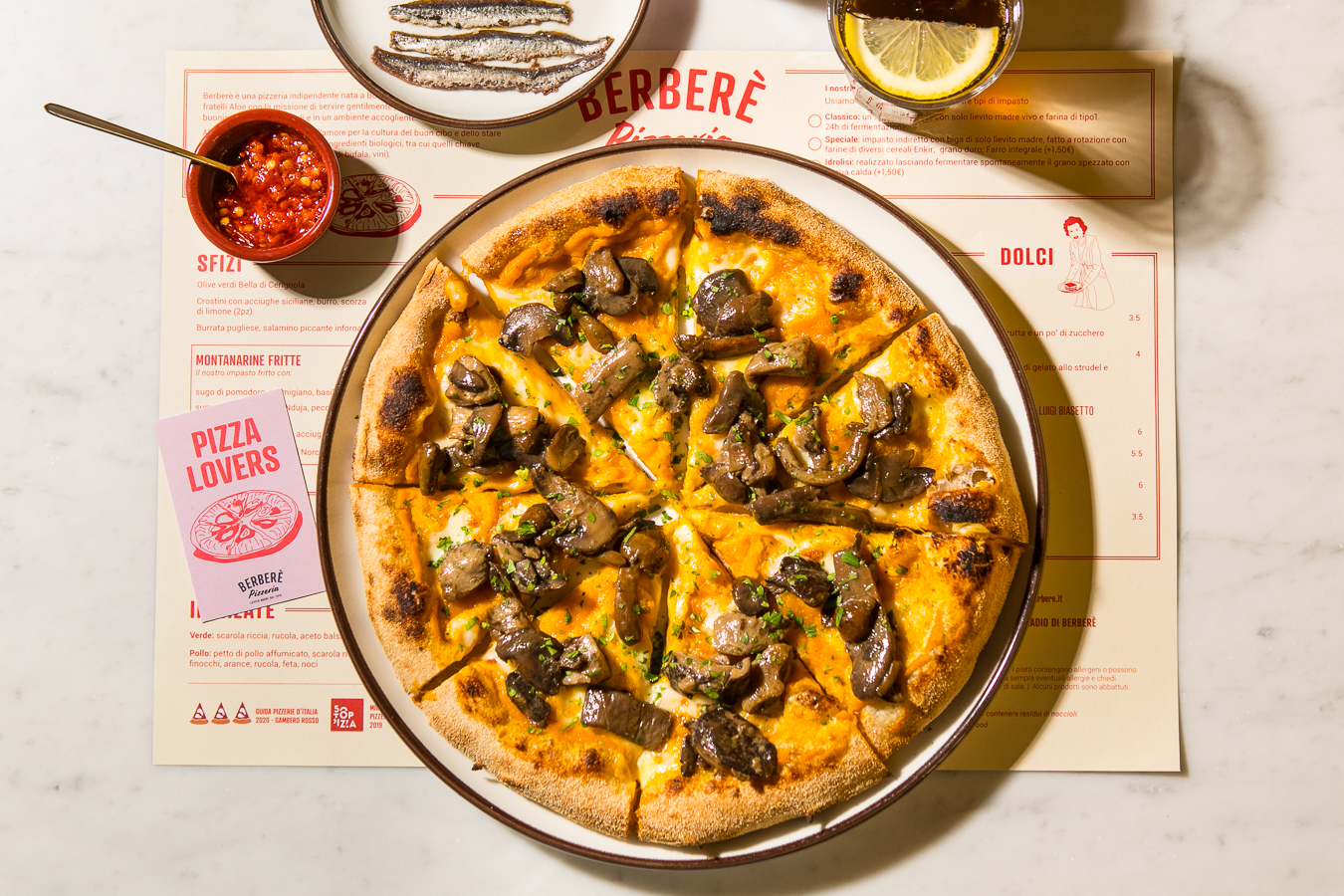 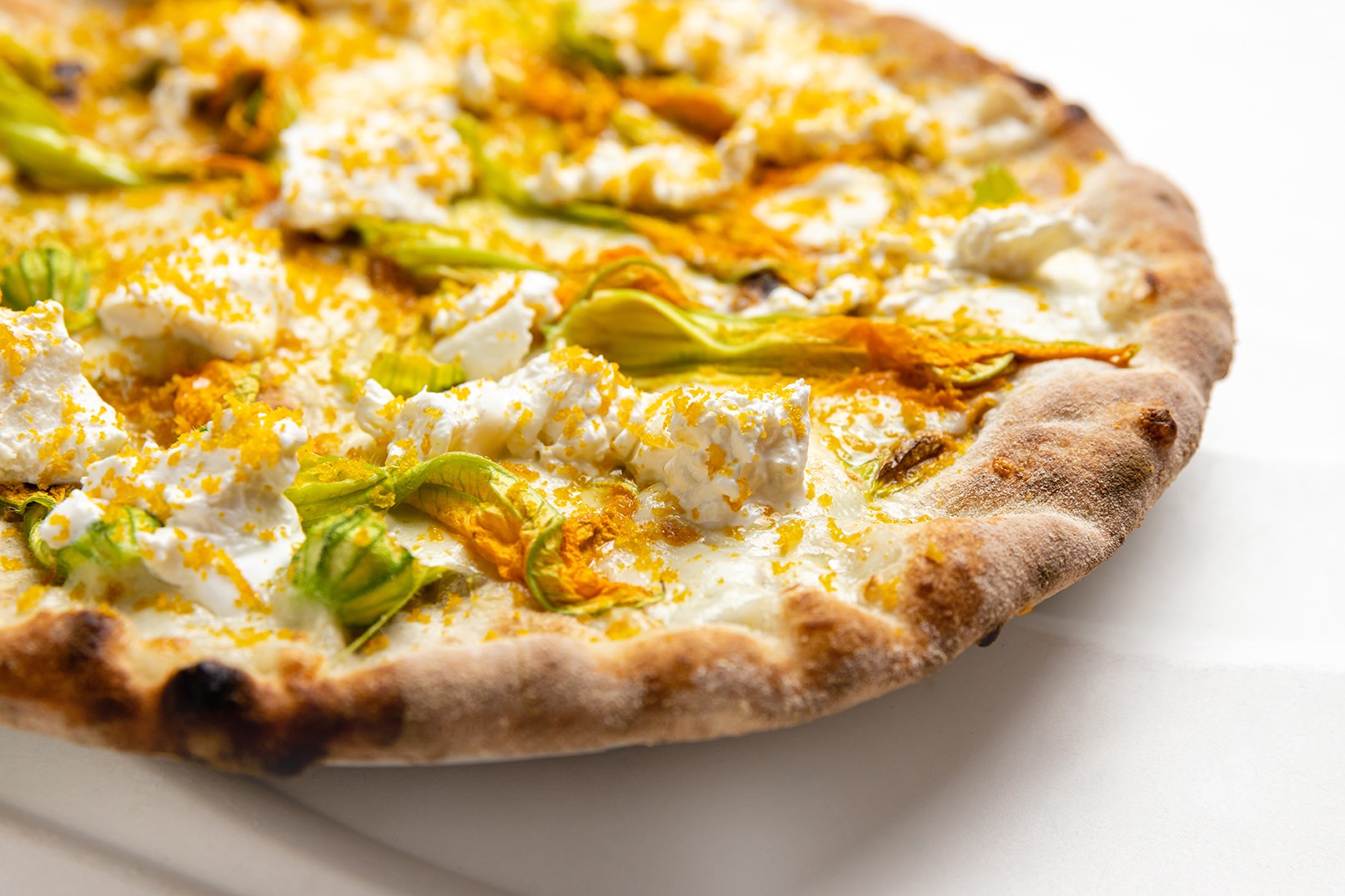 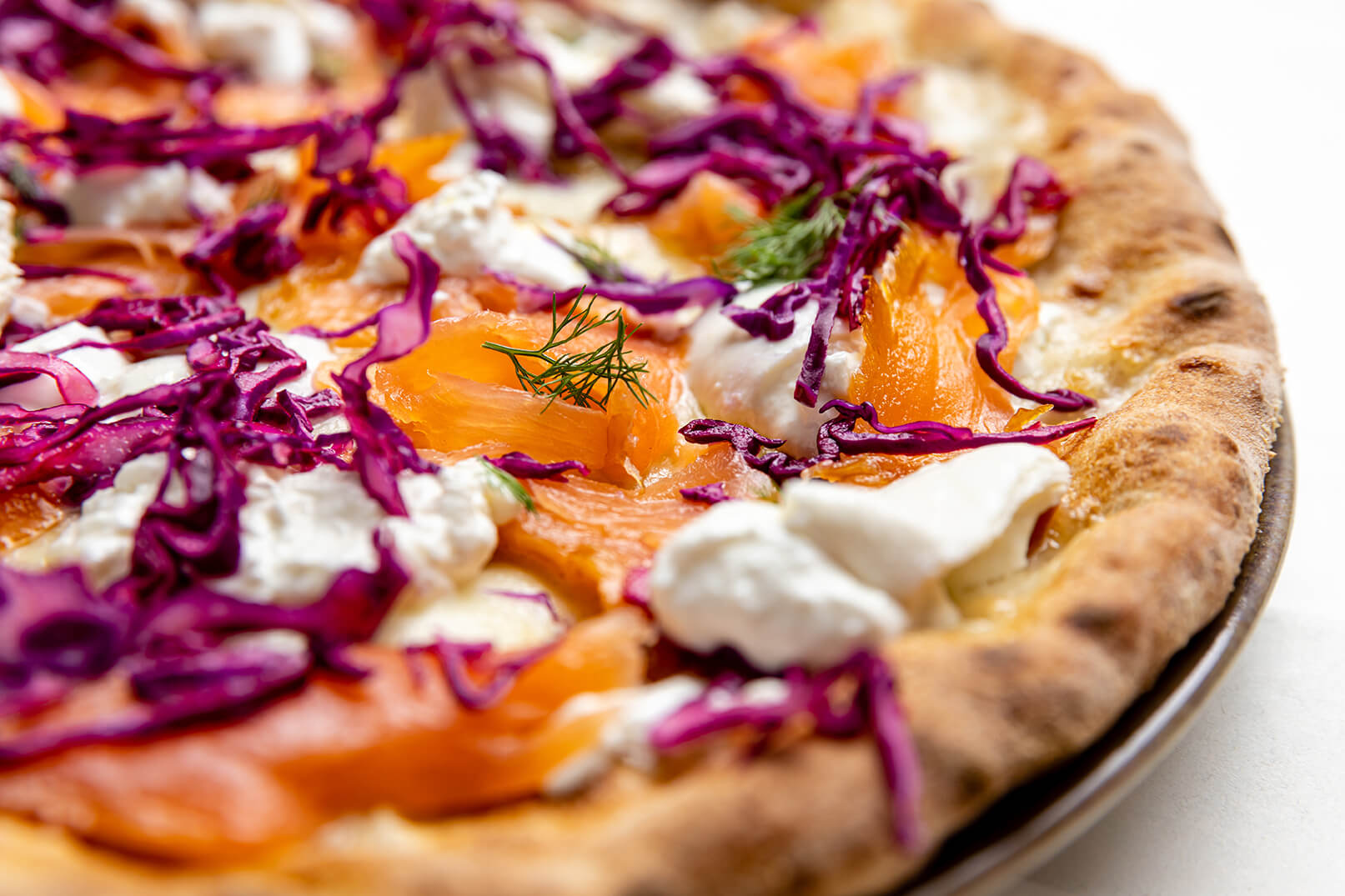 We start in Messina, where Saro Caminiti, a pizza chef driven by passion, never ceases to experiment and to study the continuously evolving world of pizza. An instructor at the “Pizza New School”, the Scuola di Grandi Molini Italiani, at the Pub pizzeria where he works, he offers not only the classic crust made with type 2 stoneground flour and untreated wheat germ, but two special crust types as well: multigrain and ancient grains. Pizza is the star of the appetizers as well, which include the Figliata (figliata cow milk cheese from Campania, mortadella, pistachio pesto, ground pistachios) served with warm pizza bread. 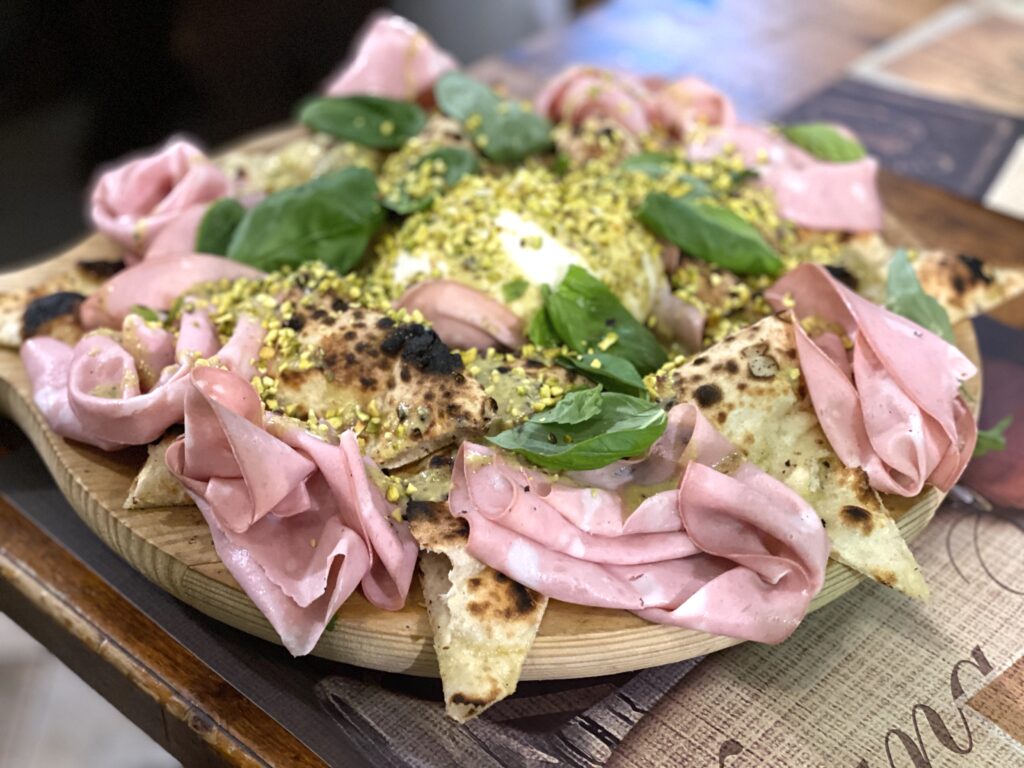 Proceeding beyond the Strait of Messina we come to Calabria, the land that gave birth to two brothers, Matteo and Salvatore Aloe who, after studying in Bologna, opened a restaurant dedicated to pizza. And so they founded Berberè: the first one was in Castel Maggiore, but others have now opened in Bologna, Milan, Rome, Florence, Turin, Verona and even London. The most popular pizzas for this winter season include Pizza with Black Cabbage (sauteed black cabbage, mozzarella from Agerola, grated sheep cheese from Crotone, leeks, mustard). How was it invented? Matteo, the chef at Berberè, has always loved Scandinavia, so much that he worked for three months at Noma in Copenhagen where he learned that Nordic cuisine consists in humble seasonal ingredients, with special attention to sustainability. Upon his return to Italy, full of ideas and suggestions, Matteo discovered black cabbage, one of the main ingredients in Tuscan country cooking. How do you make it unforgettable on pizza? By adding mustard, which not coincidentally Nordic countries are quite familiar with. 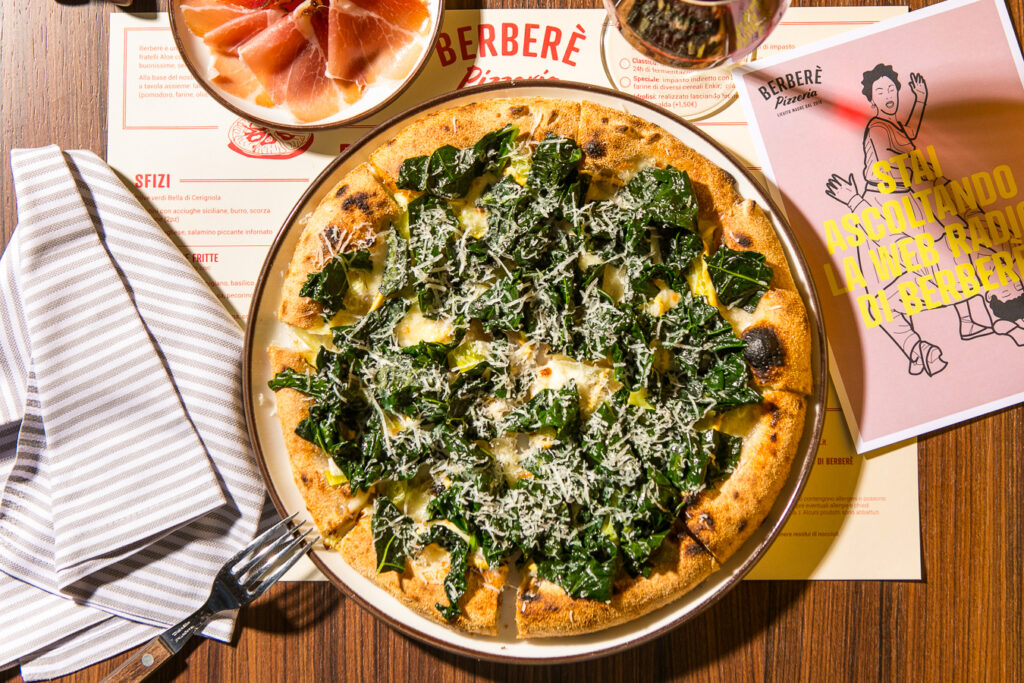 Moving North, we stop at Vallo della Lucania in the province of Salerno, where we find “DaZero” (which is also in Milan, Turin and Florence) with pizza chef Marco Fierro who relies on seasonal ingredients and a short supply chain, as well as Slow Food products. The entrepreneurial idea? It all starts in the field, the direct relationship with local artisans, the understanding of the characteristics of each product he uses to create a pizza that combines good taste and healthy eating. Like the Pizza Tre Pomodori (tomato from Piennolo, yellow tomato, dried tomato, mozzarella “nella Mortella”, basil and extra-virgin olive oil from Cilento), in which the mozzarella is made with cow’s milk then wrapped in myrtle leaves, following the ancient traditions of Mount Gelbison (which dominates Vallo della Lucania). 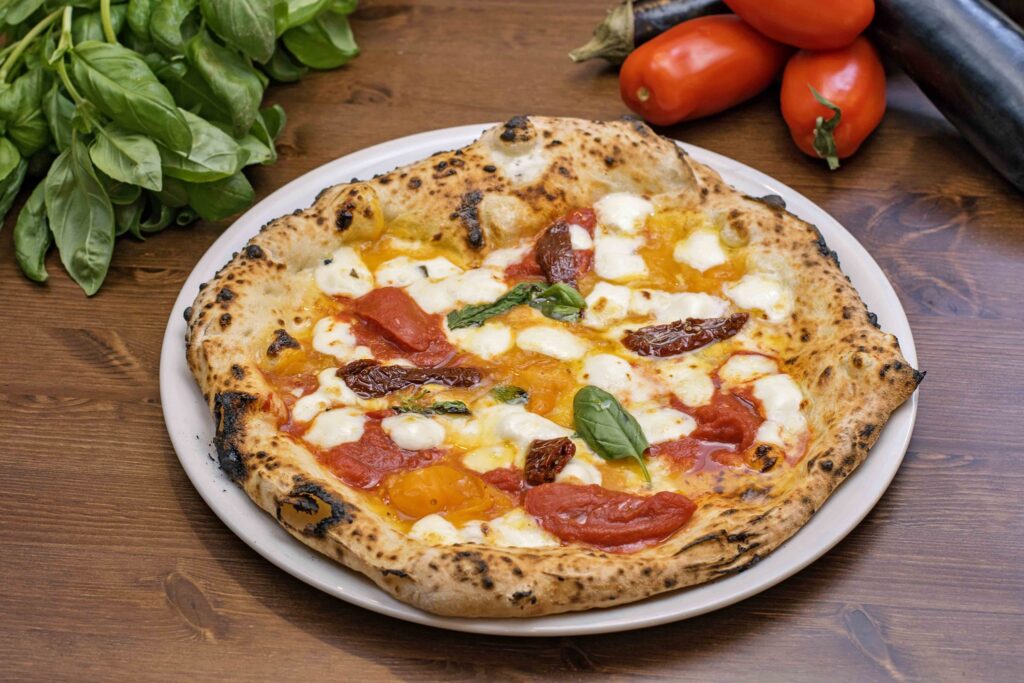 In Naples, Pizza Margherita is a must. A particularly tasty and fragrant version is made by 50 “Kalò” (which also has a London branch) owned by Ciro Salvo, who started getting his hands “in the dough” at a very young age, training in his grandmother’s pizzeria in Portici. Since then he has won many acknowledgments. His pizzeria, which is also listed in the Michelin Guide, is world-renowned, and has even been mentioned by the New York Times. 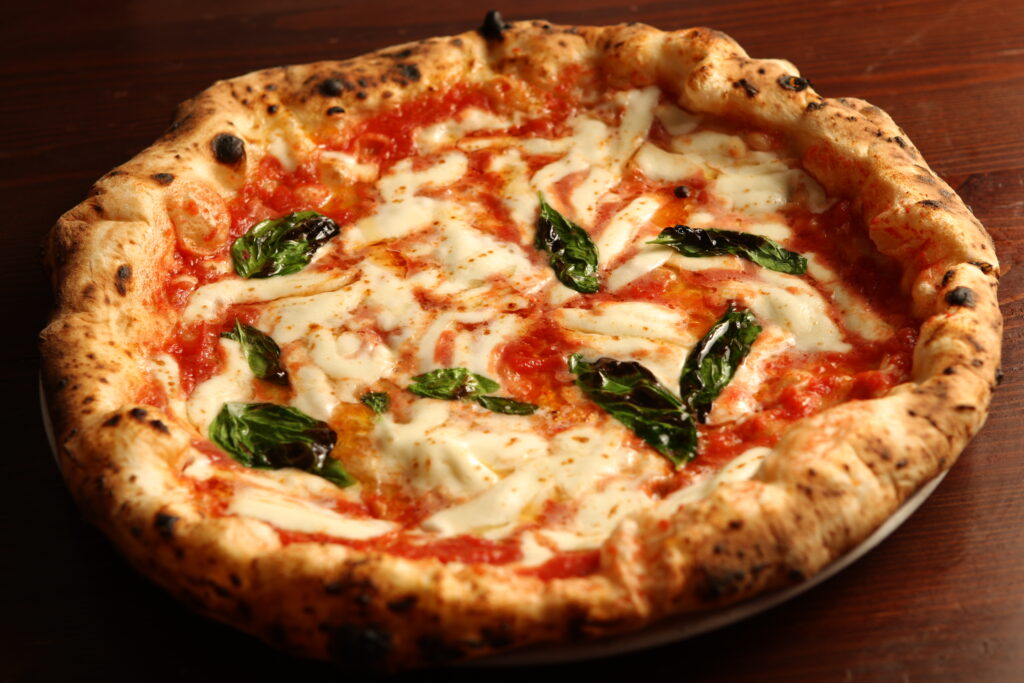 We come to Rome where “La Magnifica”, located in the Balduina neighbourhood, makes a pizza that has the distinction of being halfway between a Neapolitan and a Roman pizza, with slightly more dough than the standard 180 grams. It is a semi-whole grain dough, and each dough ball rises for three days before being rolled out by hand. The raw materials? Only products certified IGP, DOP and Presidio Slow Food with a preference for those from Apulia. One example is the Pizza pugliese (burrata from Andria, semi-dried baby tomatoes, extra-virgin olive oil and Taggiasca olives). 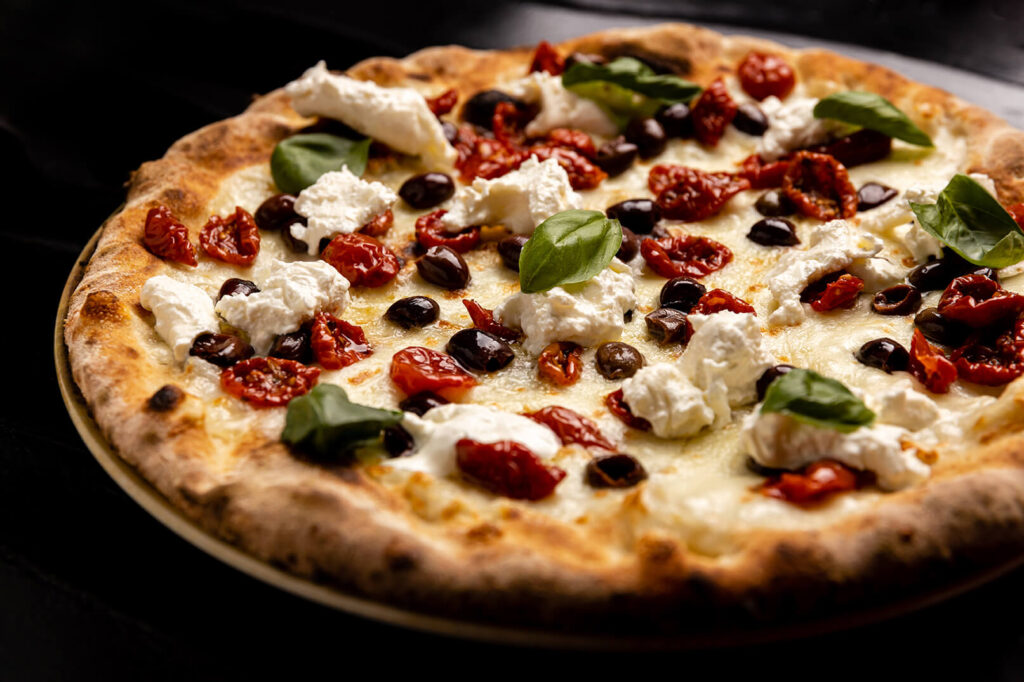 In Tuscany, at Greve in Chianti, “Lo Spela” bakes uncommon pizzas, such as the pizza with duck breast roasted at low temperatures, fior di latte mozzarella, fresh broccoli sprouts, whiskey reduction, caramelized walnut.  In this case the flour is made from 100% climate-selected wheat, stone-milled and rich in wheat-germ. The dough is left to rise from 24 to 72 hours. The products? Mostly organic and always local. 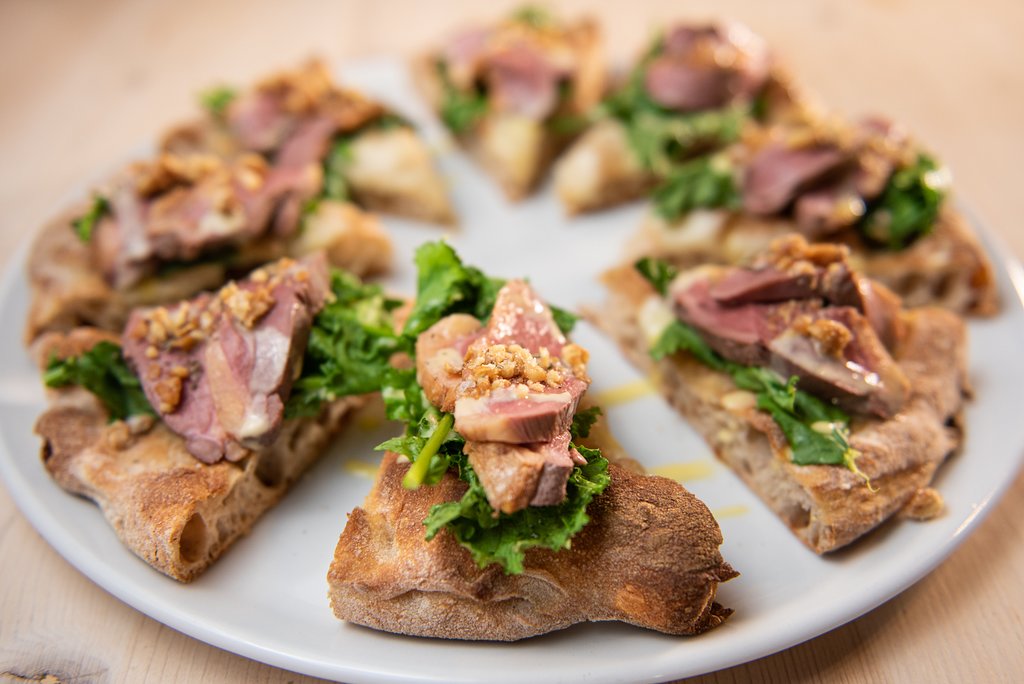 In the Veneto region, Pantografo flags two eateries, “I Tigli” and “Saporè”, both in the province of Verona. The first, located in San Bonifacio, is the reign of Simone Padoan: his strong points are experimentation, exploration of raw materials, always of the finest quality, and the study of sourdough. His goal is to define a contemporary concept in pizza, that can merge traditional pizza with haute cuisine. The Polenta and Baccalà Pizza is an expression of this aim. 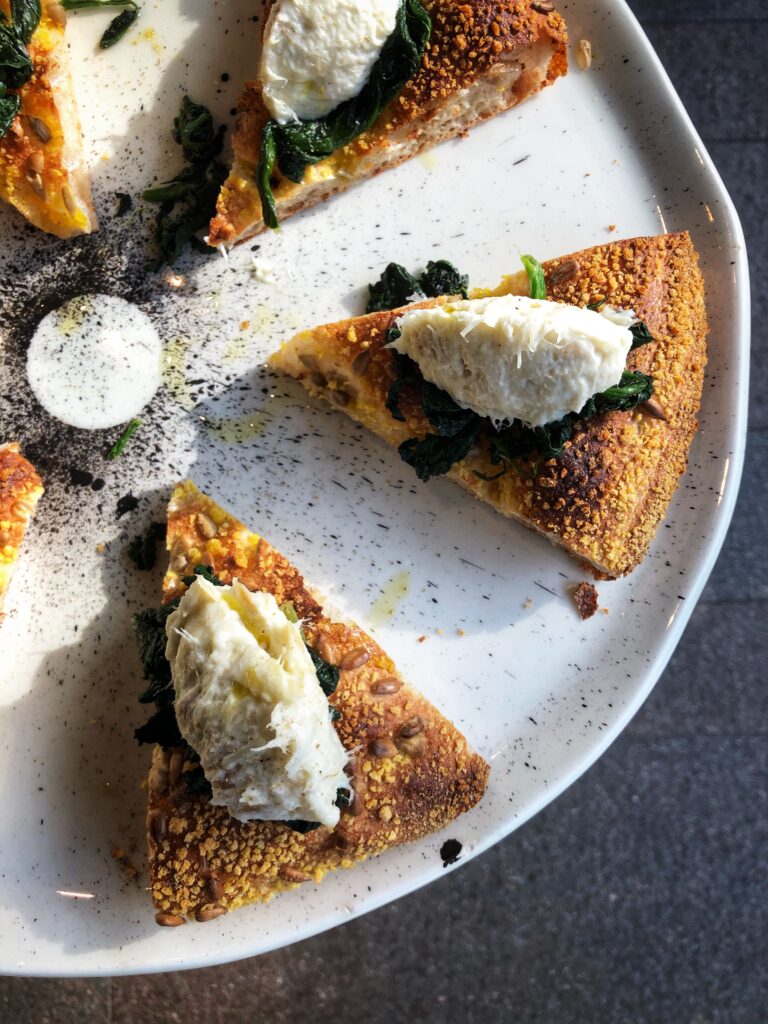 At “Saporè”, in San Martino Buon Albergo, the chef is Renato Bosco, defined as the “pizzaresearcher” for his innate spirit of experimentation, which over the years has led him to address all the sectors that revolve around yeast dough. A teacher at various cooking schools and an Ambassador of Taste, Bosco now offers eight types of pizza, which differ in form, consistency, type of leavening and baking process. They include PIZZA CRUNCH® and PIZZA DOUBLECRUNCH®, both of which feature a crunchy dough (hence the name), ARIA DI PANE®, with a soft and light sourdough crust, PIZZA BAGEL which is a crosspollination with other cultures and is cooked in water flavoured with curry, beer, Campari or Amarone. 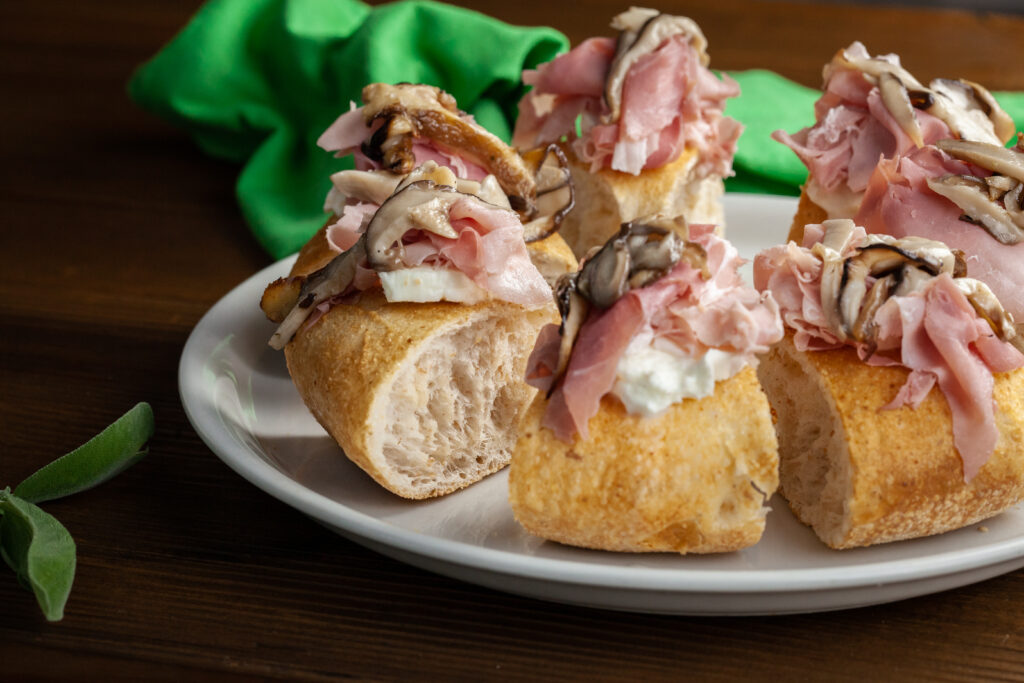 In Lombardia, we stop at “Cocciuto”, in Milan: three different locations, bound by a single thread, “Quality in mind”, as the payoff reads. “Cocciuto”, which means stubborn in Italian, is for people who understand pizza and cuisine in general in the only way possible – preserving the excellence of raw materials, precision in cooking times, the passion and simplicity of the authentic Italian and international tradition. The chef is Nicolò Farias, who has added a number of pizzas to the menu, such as the Vendicari (local 0 km mozzarella, tuna, semi-dry tomato, crunchy onion, ginger spice, mint and basil sauce). 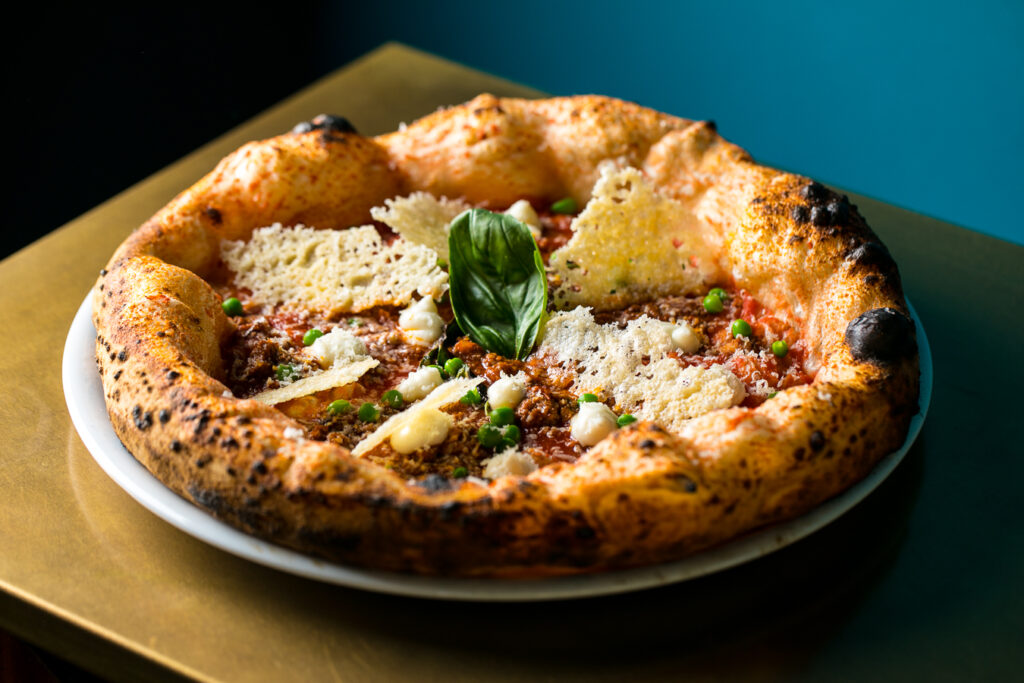 We now arrive in Piemonte, and more specifically to Canale d’Alba, near Cuneo, home of the pizzeria “Al Fuori Tempo”: here, thanks to the skill of Davide Di Bilio, you can taste a good Neapolitan pizza made with three different types of crust dough: semi-whole wheat (with type 1 flour), 100% whole wheat (with type 2 flour), spelt flour, corn flour and sunflower seeds for the gourmet pizzas. Di Bilio decided to give a specific name to the type of Fuori Tempo pizza, the “Pizza Napoletana Gourmet”, because the result brings together the Neapolitan tradition and contemporary gourmet pizza. 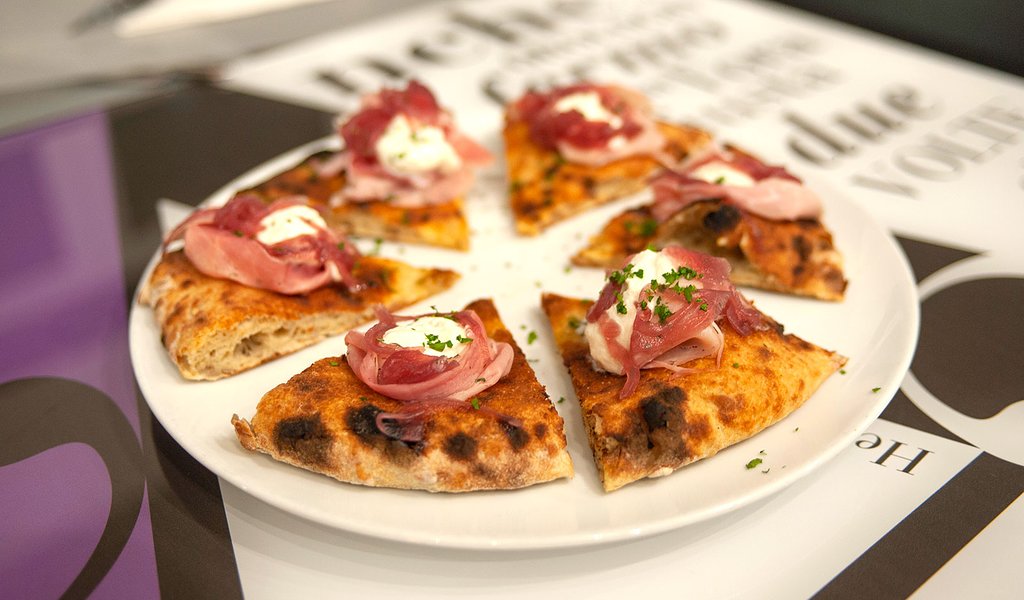 From the Piemonte region to Sardinia it’s just a hop skip and a jump away, at least in historic terms. In recent years at Baridili, a small town of only 78 inhabitants in the province of Oristano, a very interesting new venue has materialized: COI (from “cooking” in Sardinian) – Accademia Enogastronomica and the Sa Scolla pizzeria. The Accademia, which was founded in 2010 and since then has held classes (since 2014, residential classes held by high-profile chefs such as Cristiano Andreini and Salvatore Camedda), works towards the enhancement and promotion of local products by involving small local producers (with the goal of creating prospects for them to access the market). The initiative garnered significant success in a few short years and around the world: the Accademia participated in Expo 2015 to represent Sardinia, then travelled to the United States, the Philippines, Cambodia, Indonesia and now South Korea. At a certain point, they founded “Sa Scolla” (from the Sardinian “The School”), a “restaurant and pizzeria with a country kitchen”, as it is defined, which initially opened in Baradili and now has a branch in Cagliari as well. The cuisine at Sa Scolla is young, fresh and contemporary, and at the same time firmly anchored in the territory and its traditions. It expresses pizza such as the 4 cheeses selected by Michele Cherchi (mozzarella, pecorino sheep cheese flavoured with myrtle, Puzzone di Moena, Comte Rouge from the Jura, Oro Rosso Erborinato refined in raisin, sapa) and the Gallina della Marmilla (mozzarella, roll of free-range chicken, baby tomatoes, olive mayonnaise, fried capers). 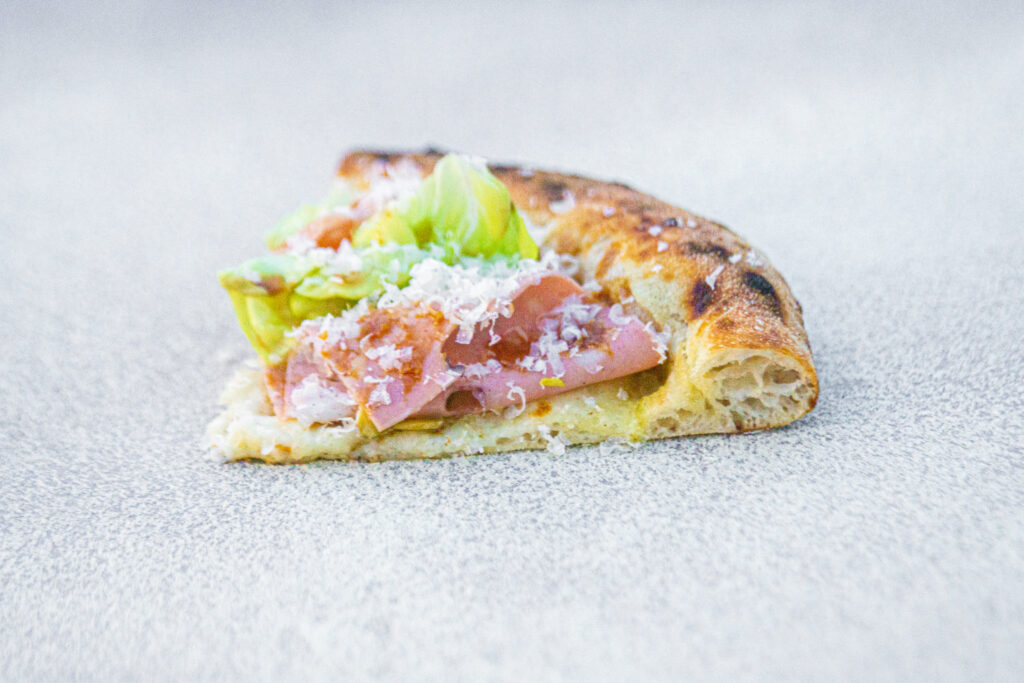 Now it’s up to you. A journey dedicated to the search for the finest pizza in Italy could turn out to be a happy mouth-watering perspective for those who love to discover Italy along with its delicious cuisine 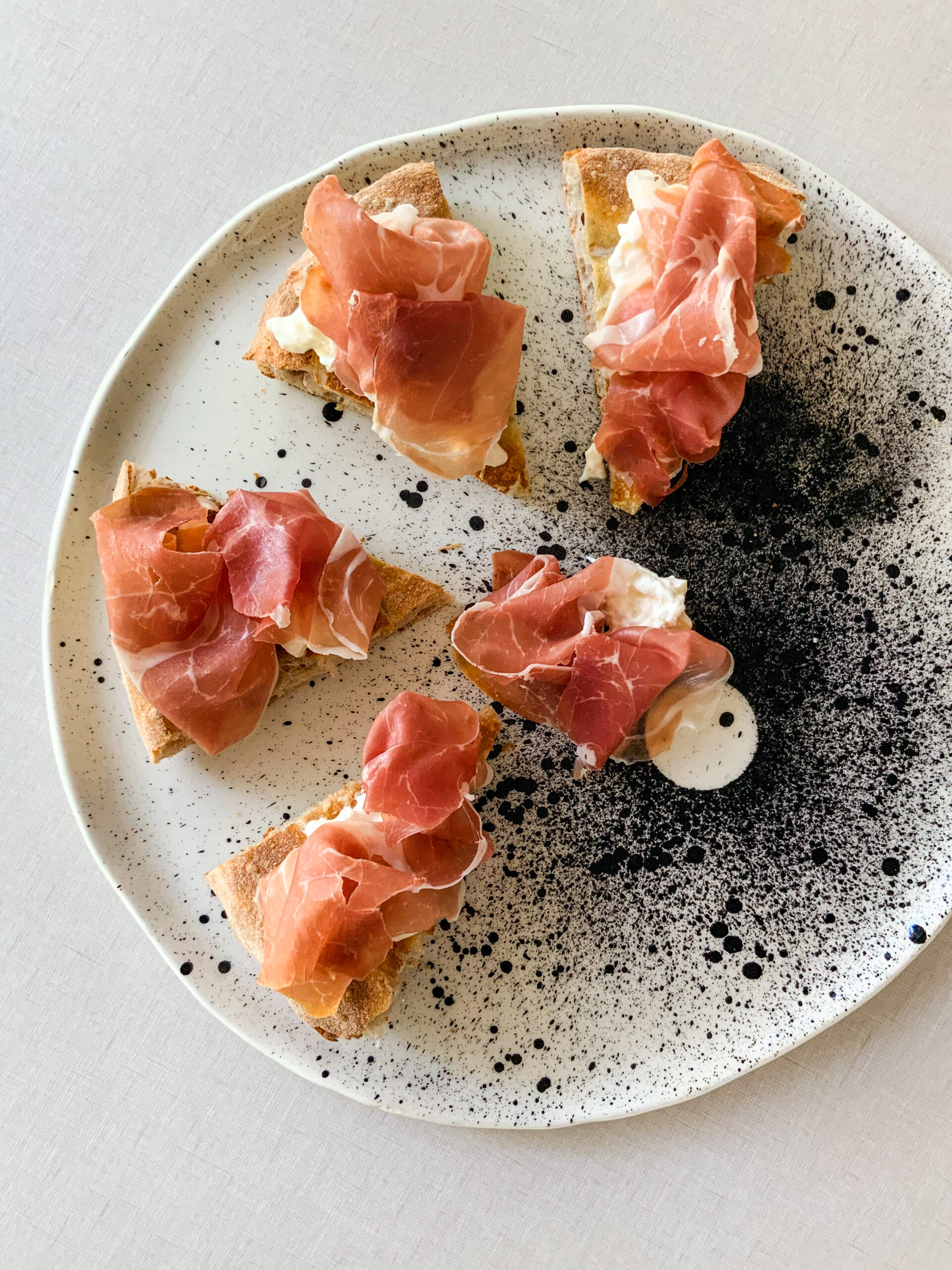 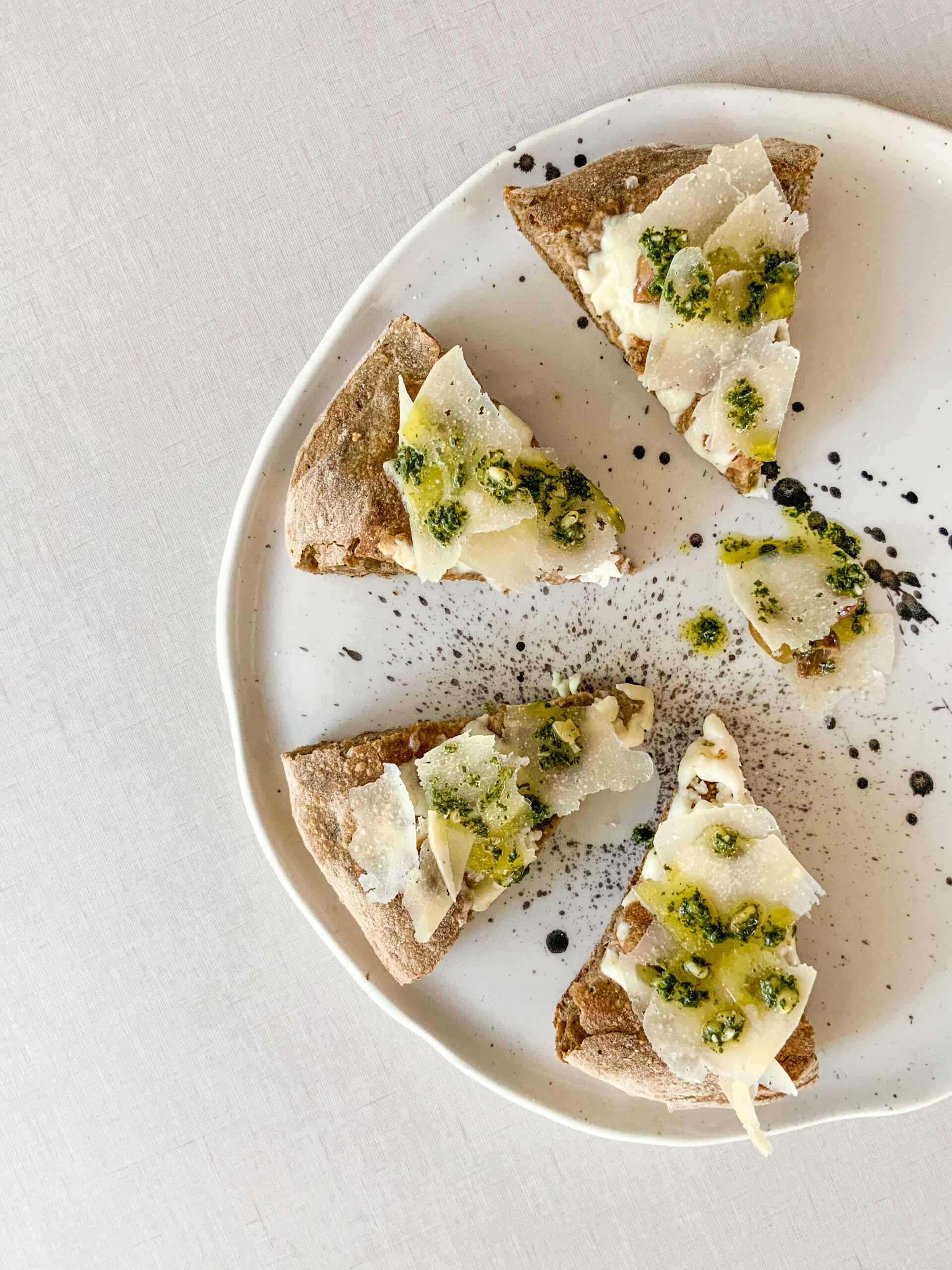 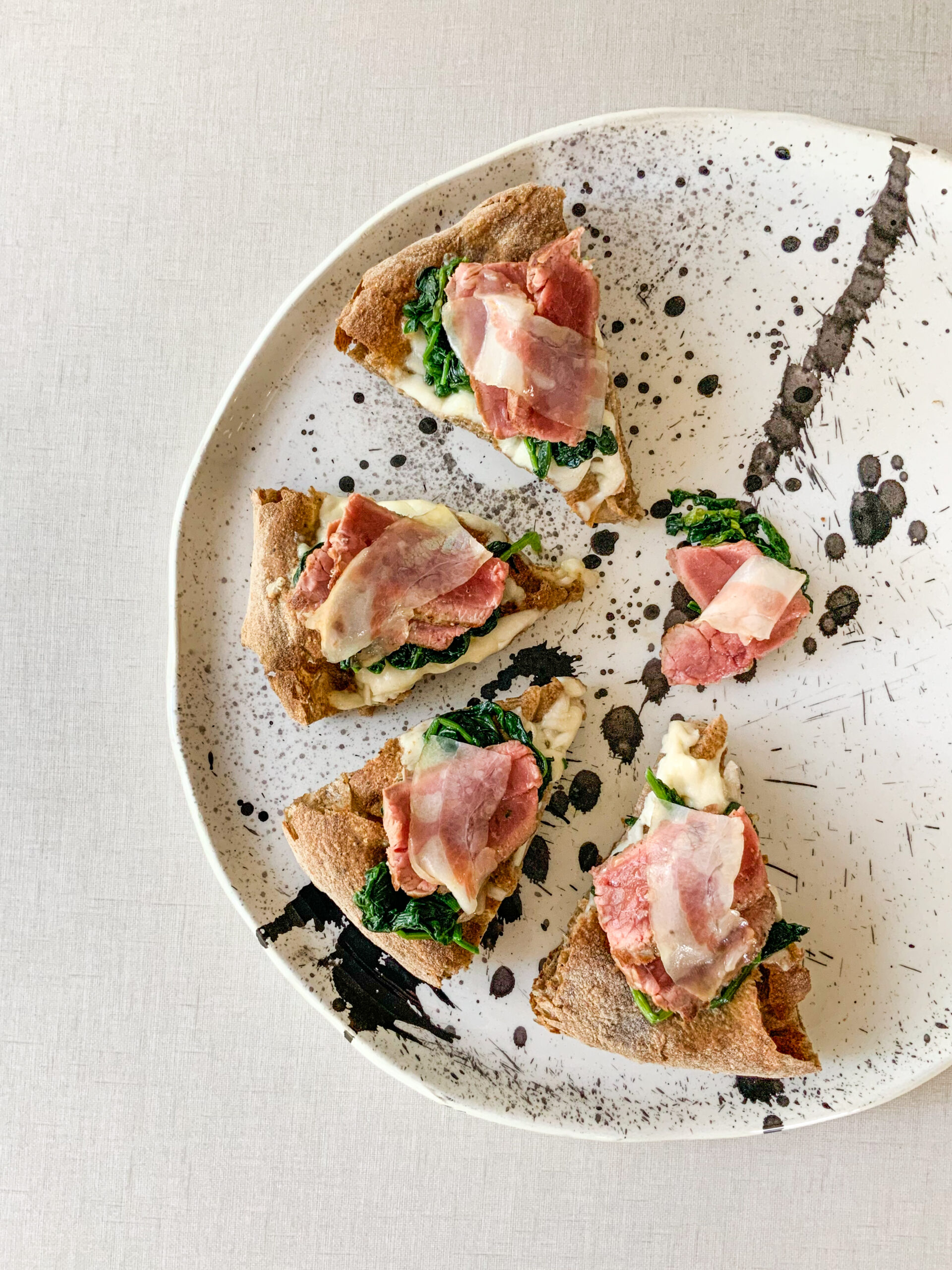 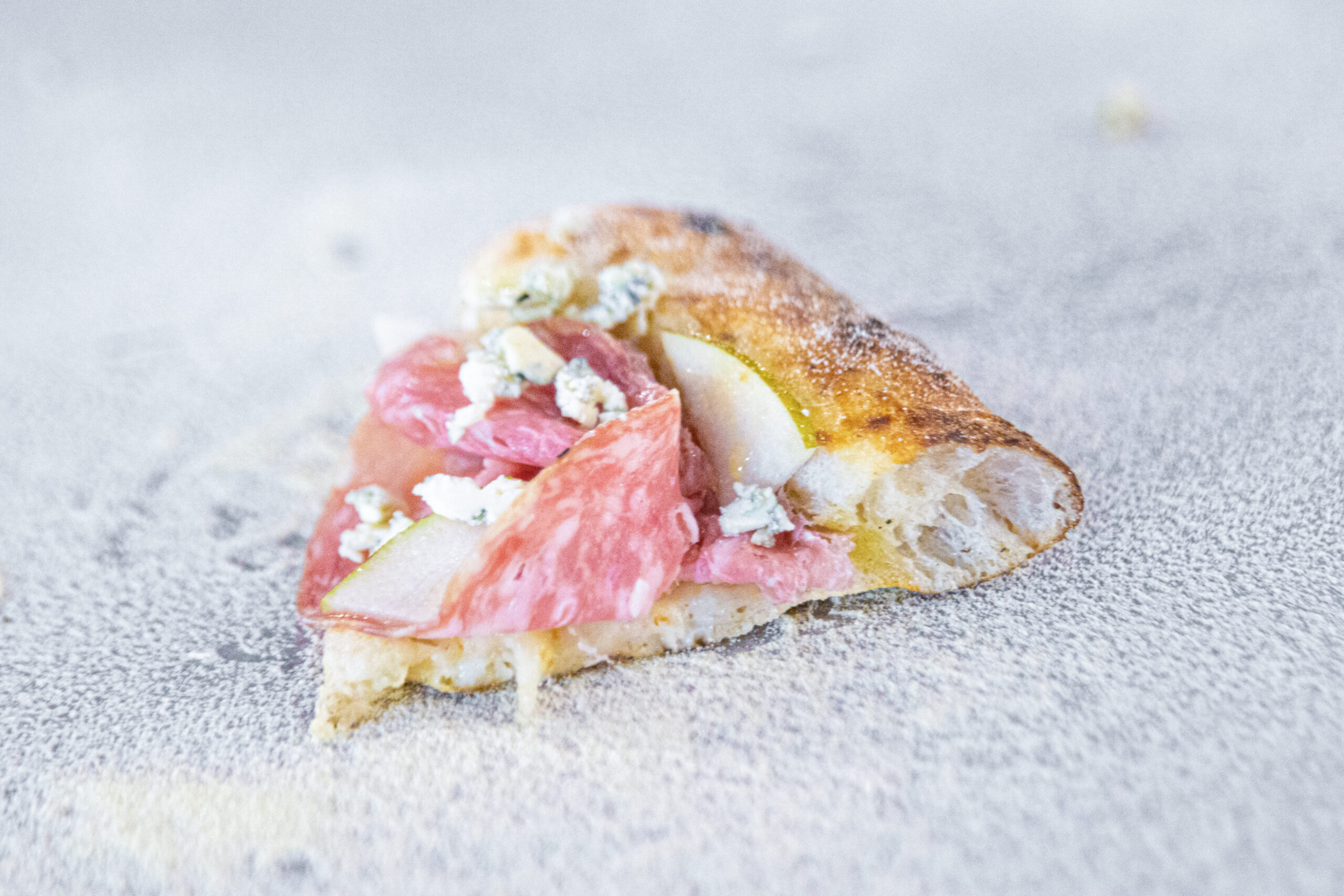 Room with a view over Tavolara, the Baglioni has landed in Sardinia