A 6 million euro investment, 3 years of work, a collaboration with Microsoft: this is the data on Phyd, the first entirely phygital space in Italy conceived and funded by the Adecco Group, the concept design and project of which were created by the Milanese firm Il Prisma. A digital platform and physical location at the same time, headquartered in Via Tortona in Milan, just steps away from Base and the Armani silos, dedicated to the job market, where applicants can find opportunities to evaluate and recalibrate their skills, with an eye to continuing education and bridging the mismatch between supply and demand that the job market is increasingly contending with.

This is a project, however, that will not be based on the idea of searches and meetings with the “parent company” Adecco, but on a concept that goes one step further and, thanks to artificial intelligence developed by Microsoft, will work out a “custom” path for each applicant, which will run from the assessment of skills and weaknesses to dedicated interviews with coaches. The key words to the project will therefore be reskilling and employability. 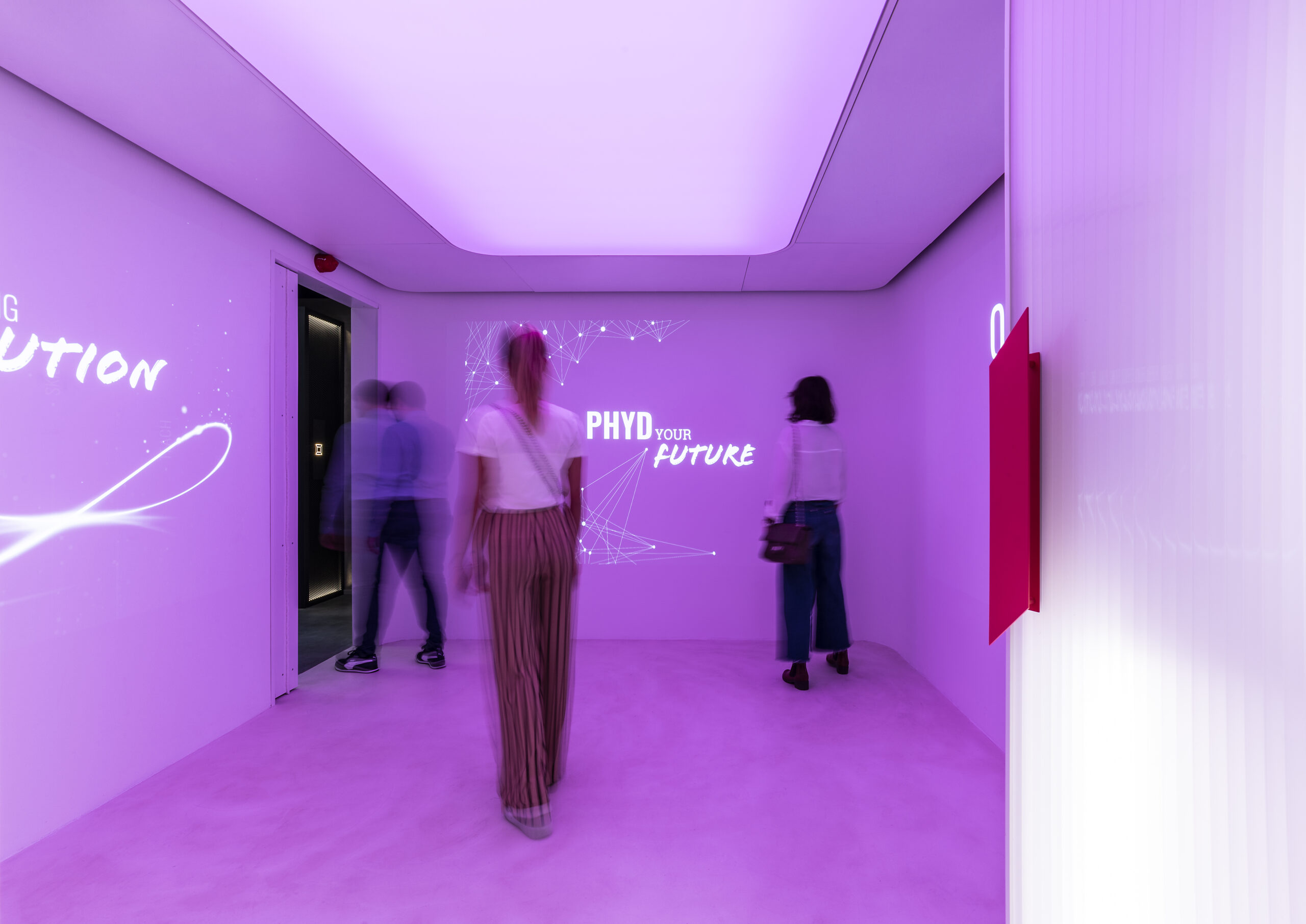 «We have built a space and a platform of this type so that people begin to realize the importance of working on their skills, and thereby becoming the protagonists of their own professional futures» stated Andrea Malacrida, founder of Phyd and country manager Italia for Adecco.

A practical response to the needs of a job market that is constantly changing, where, according to the estimates of Unioncamere, in 2022 Italy will need 2.5 million new employees. Of these, it is likely that in sectors such as ICT, it will be very hard to find qualified personnel in years to come. And without this continuing education, which will involve individuals and companies both – Malacrida demonstrated how in the future 65% of children will have jobs that do not even exist today, involving AI, coding, Big Data, robotics, logistics and in the medical field – «neither businesses nor Public Administrations will have the capacity to evolve and be competitive» specified Silvia Candiani, AD of Microsoft Italia, a partner in the initiative. Candiani also described how «in April Microsoft initiated the digital restart project: a 1.5 billion euro investment to build a cloud data centre, but also to invest in skills. It has been estimated – she continued – that this sum will generate another 9 in investments». 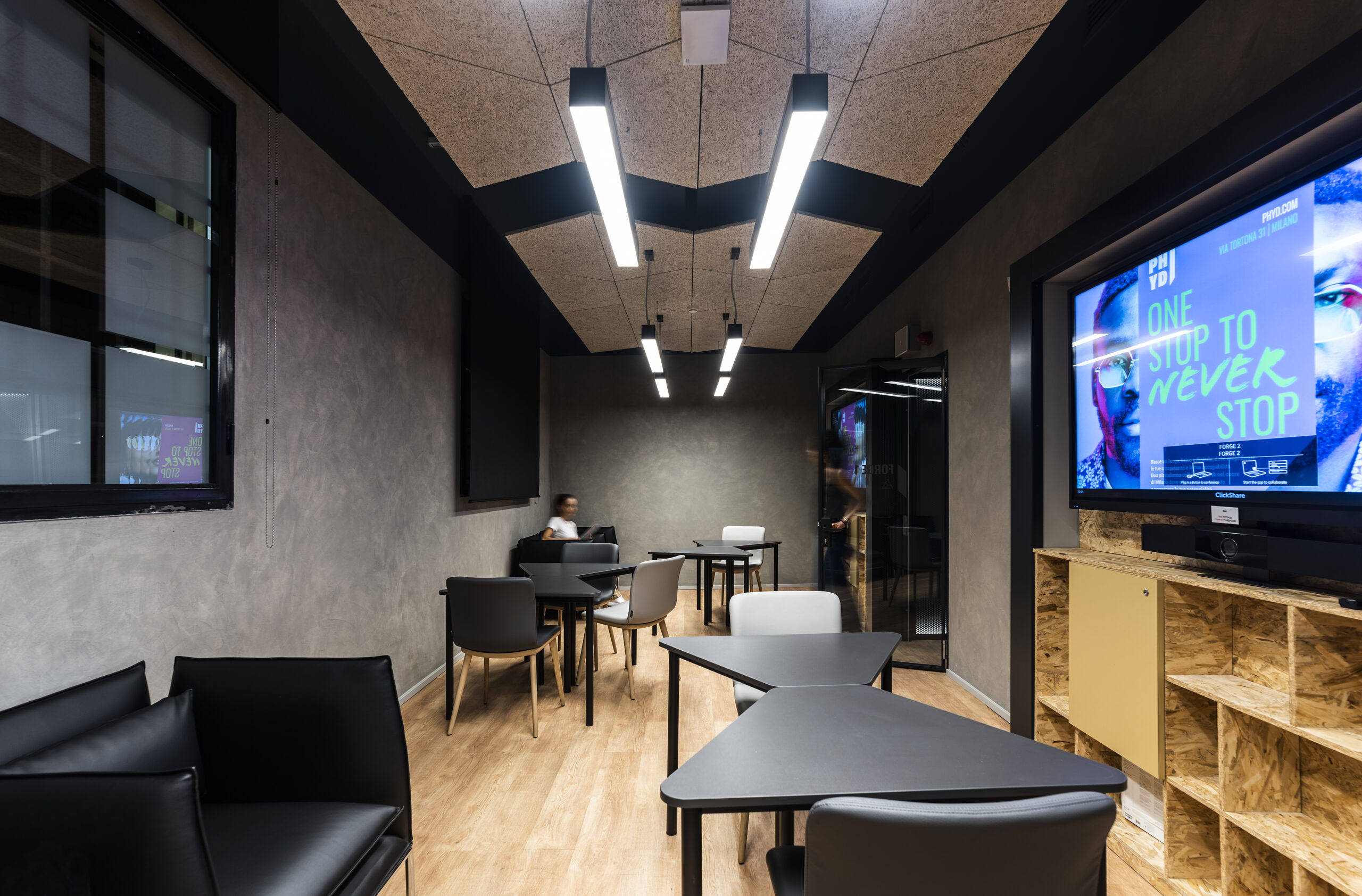 Concretely, the platform will have an online interface where, thanks to artificial intelligence by Microsoft, it will «photograph the individual, his numerical and digital skills, the jobs he wishes for or towards which he feels he needs to go, later developing an employability index», explained Manlio Ciralli, chief executive officer of Phyd. The news is that this process can also be completed physically in the Phyd offices, in full phygital style.

Phyd will furthermore be open to everyone, and become a venue for meetings, talks, networking opportunities, and upskilling and reskilling tracks, most of them free, as well as a 44-week schedule of events that will follow the calendar of the Milan weeks, and will be open to the public.

A physical-digital merger, this project by Adecco, which is mirrored in the concept and architecture of the offices conceived and built by Il Prisma, which for two years has accompanied and processed the requests and requirements of the clients for this truly unique space.

«Architecturally it was quite a challenge – says the firm – because, as a space that had no precedent, we had to define the requirements and experiences of the process, which needed to be a total, immersive experience. So we had to define these phases and create spaces that had a strong identity, but at the same time would refer to the digital sphere». 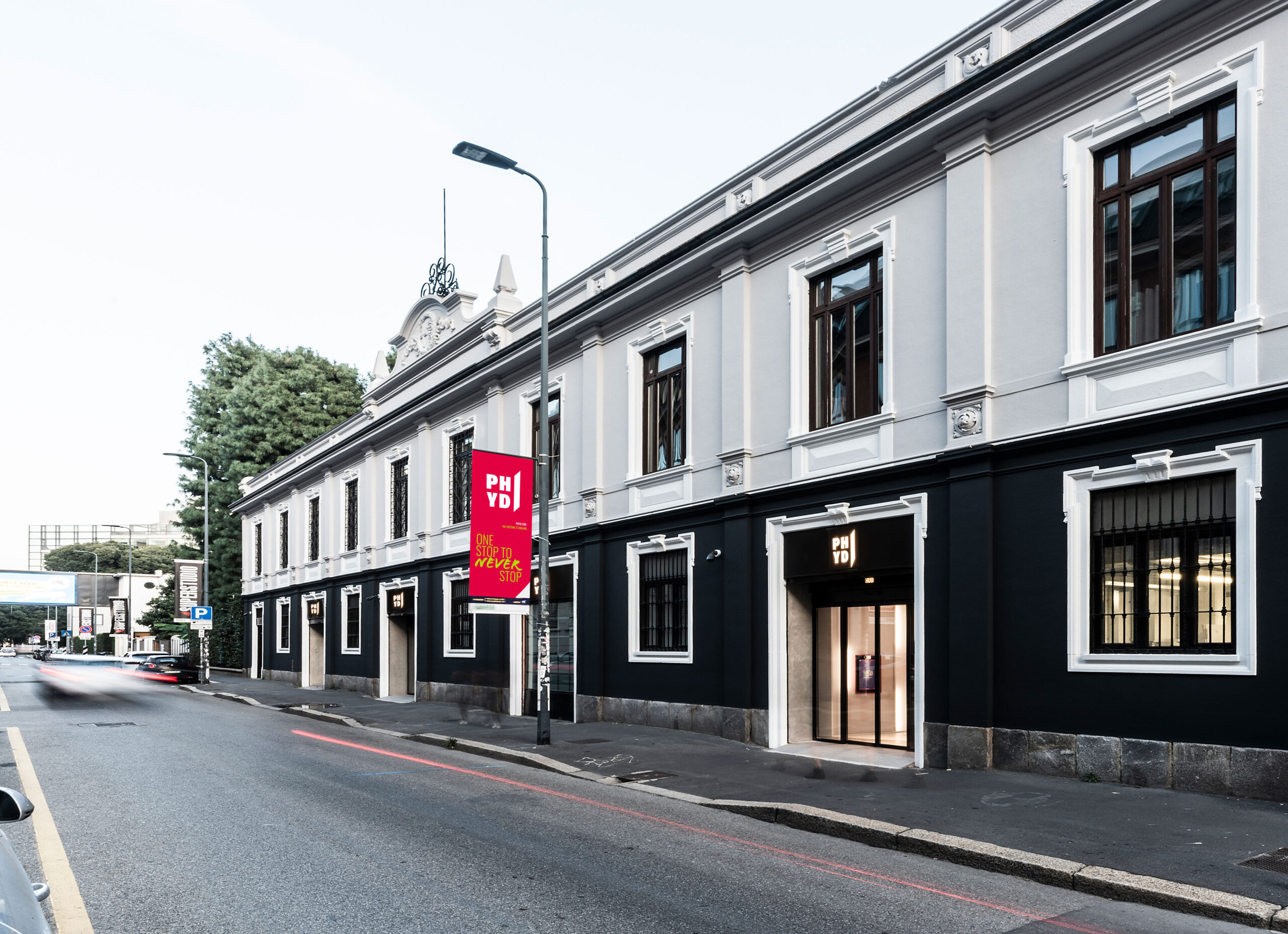 Called “The Greatest Adventure. You”, the design concept was inspired by the Alternate Reality Game and developed as an experiences divided into four different areas: Start Phyd, Training, Connection and Food.
«The entrance, which has been named Edge, is the peak in the impact of this immersive space – the explanation continues – where the boundaries between the digital and the architectural blur and practically merge. In this barrier-free space there are projections that explain what Phyd is. From there we continue with a lit ceiling, which is a clear reference to the digital». You then enter a corridor that contains the four capsules of the training area that, they explain, are inspired by phone booths and are totally soundproofed, dedicated to the individual consultation of content and heterogeneous experiences, in which the user interacts with Phyd by means of technology (Self-interview, Professional self-portrait, 3D Assessment with 360-degree visors). The fifth element is Forge, an entirely flexible space adjacent to the bistro, distinguished by folding partitions and furniture that can be aggregated, where users can activate experiences in networking, sharing, discussion, learning and vertical training for small groups. Arena is the space dedicated to connection, which hosts classes, workshops, talks and events. It is next to the bistro, to the world of food, and here too there is a folding partition, that allows a total merger not only between the physical and the digital, but between the physical and the physical. 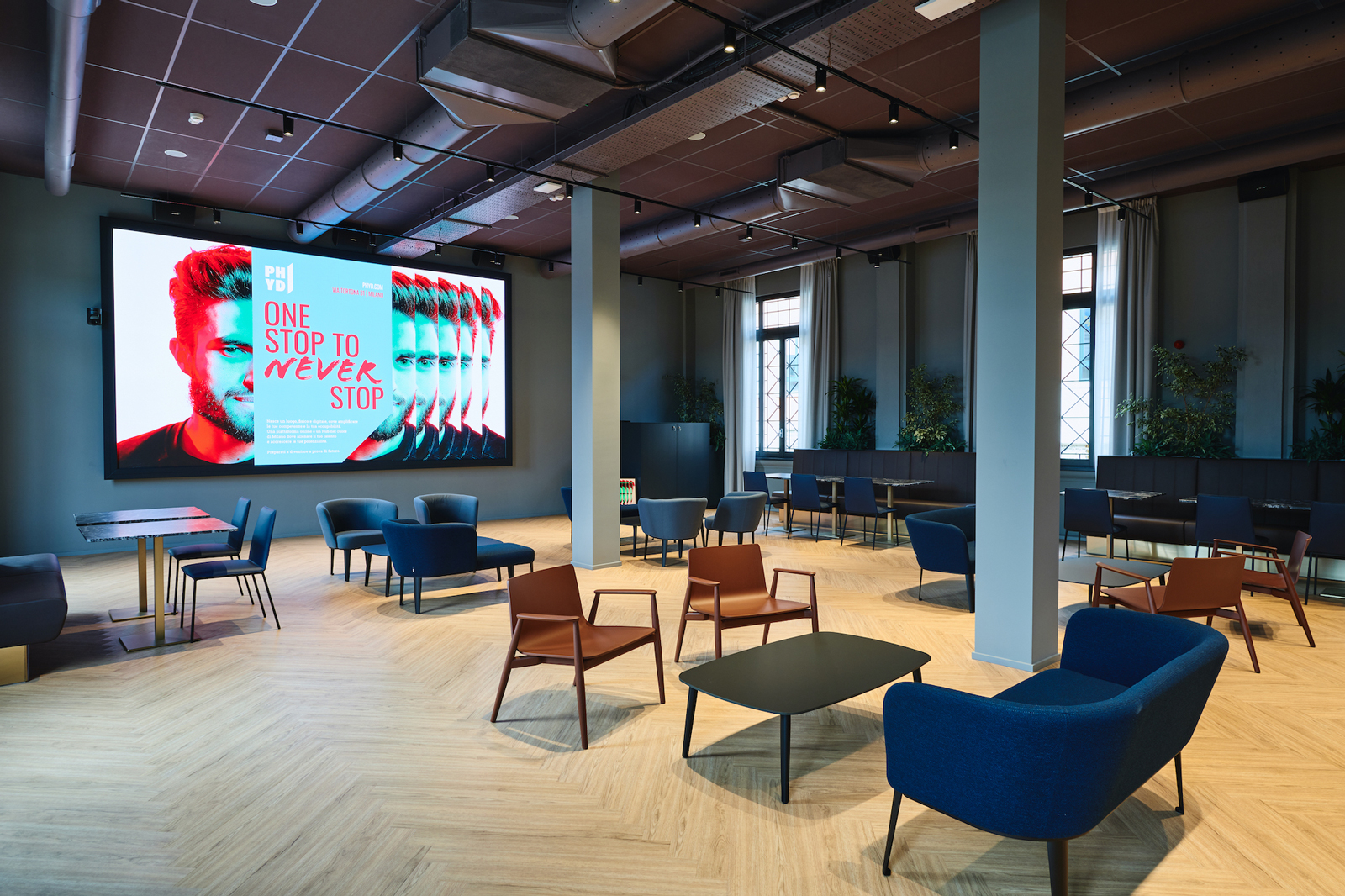 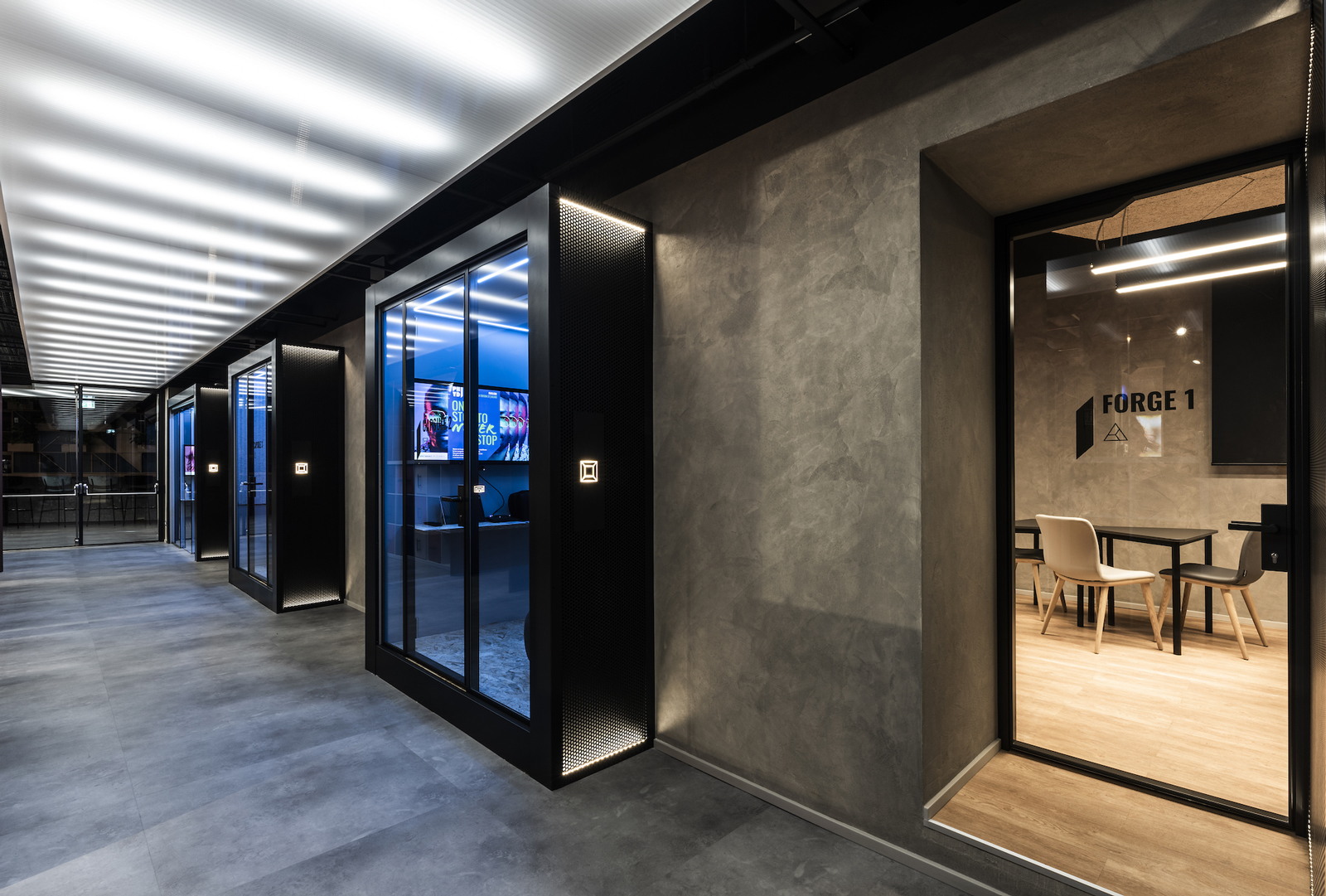 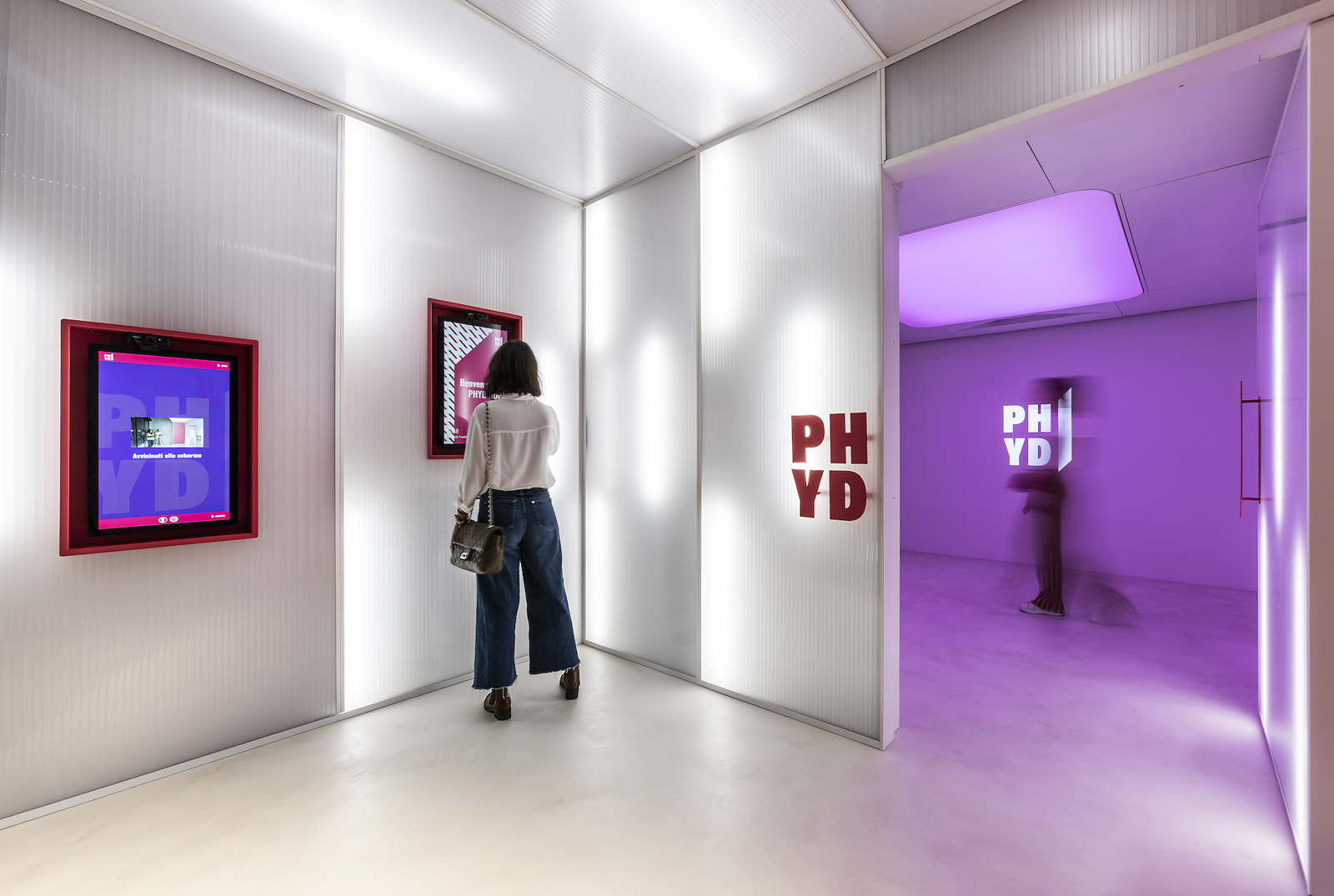 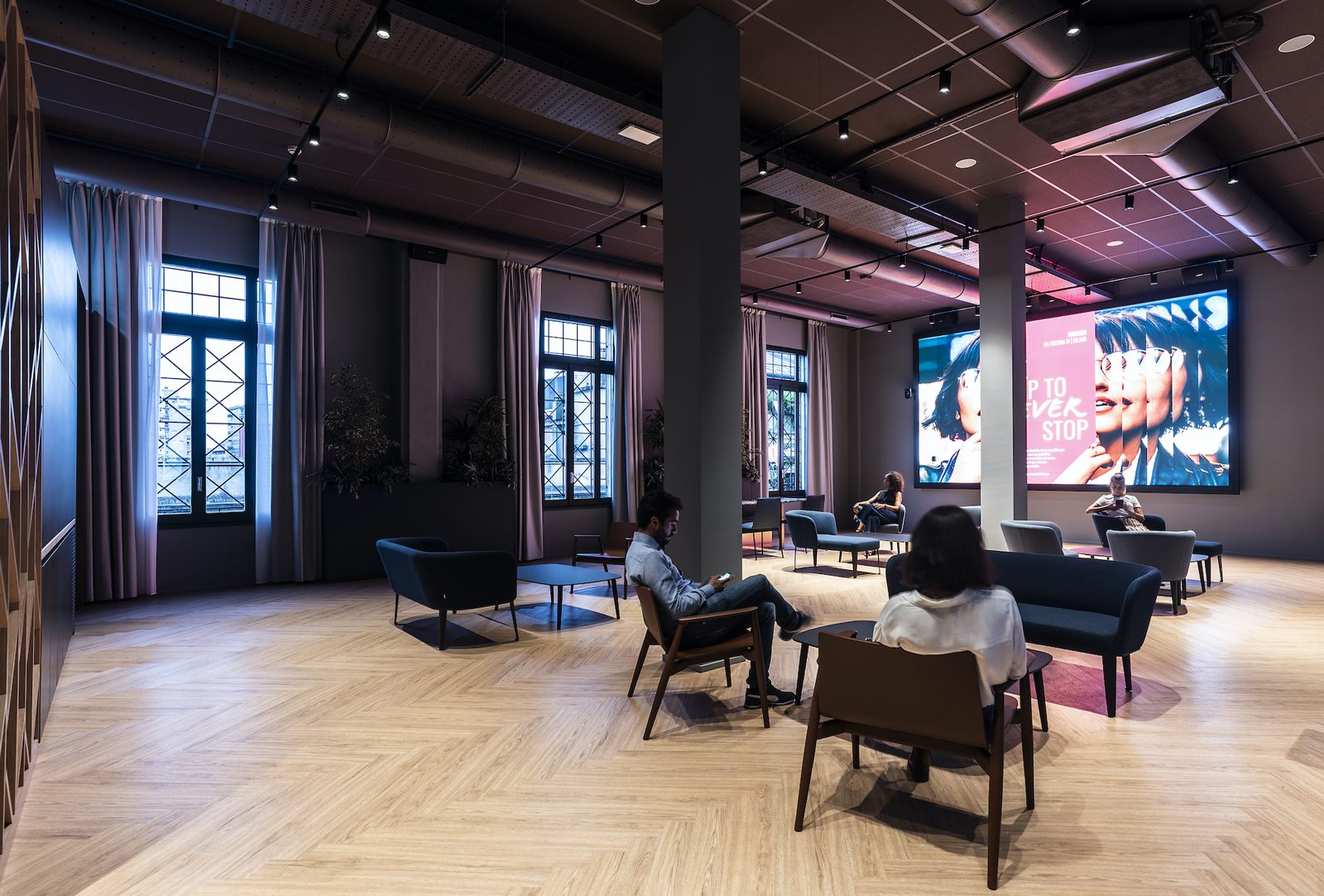 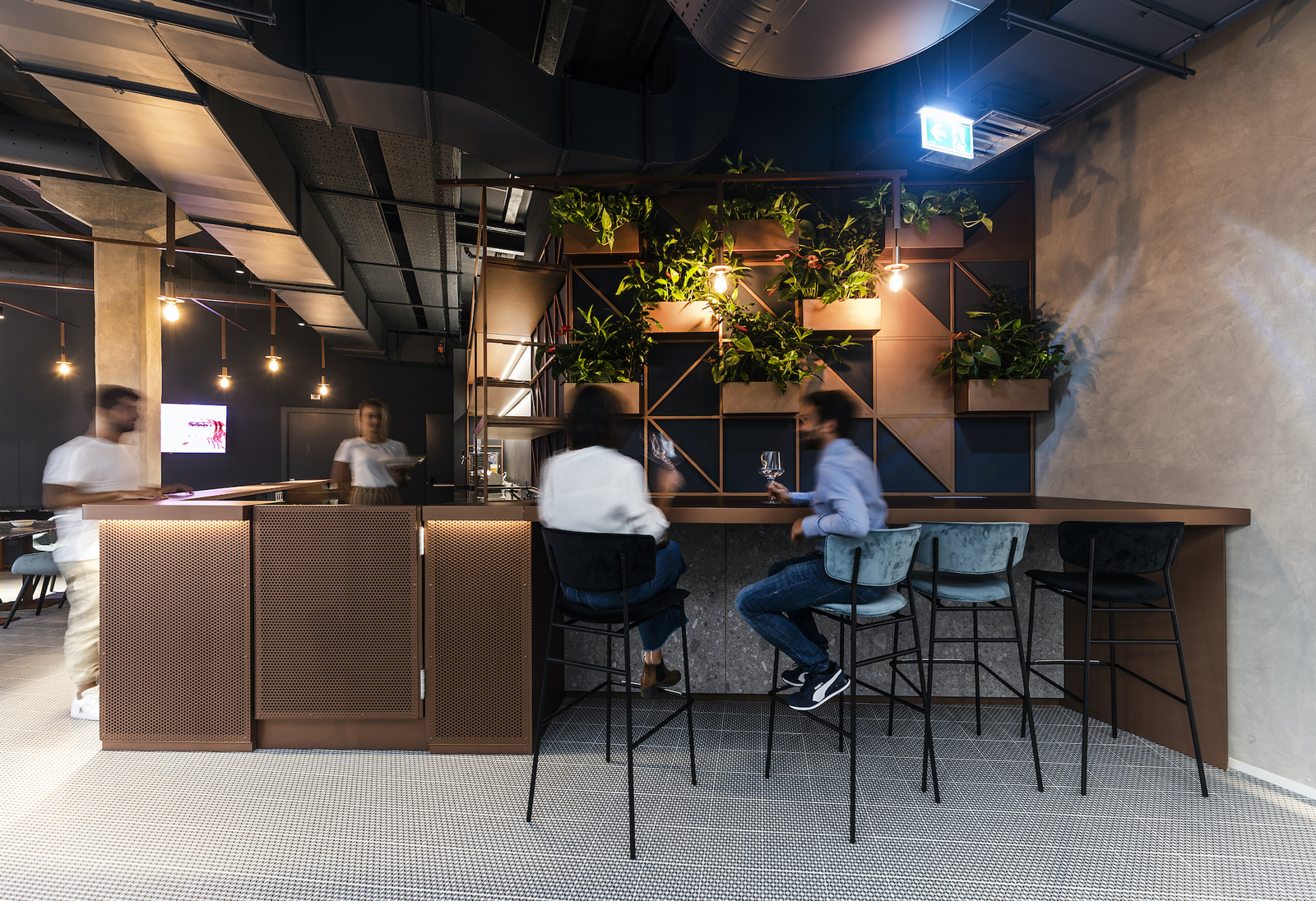 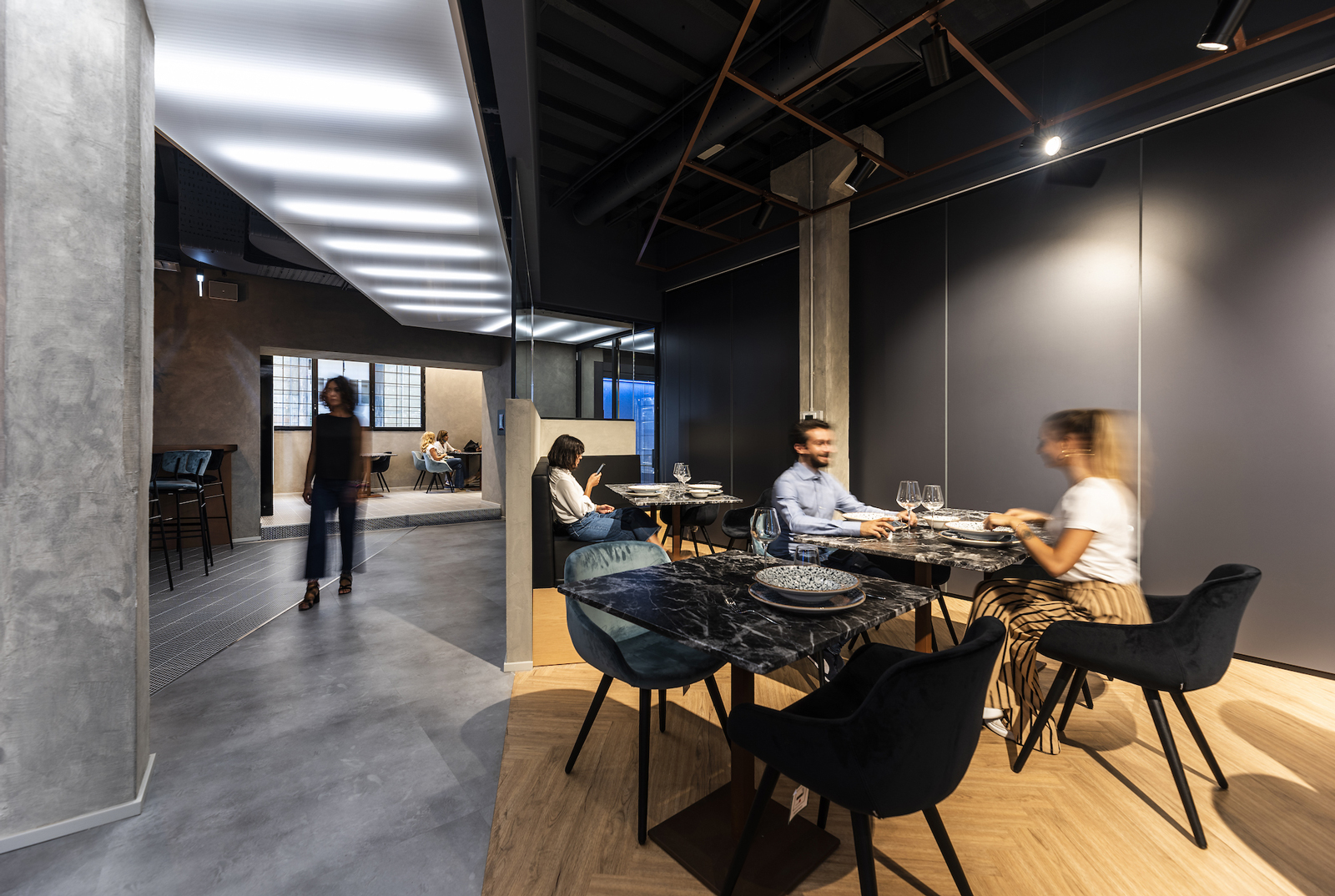 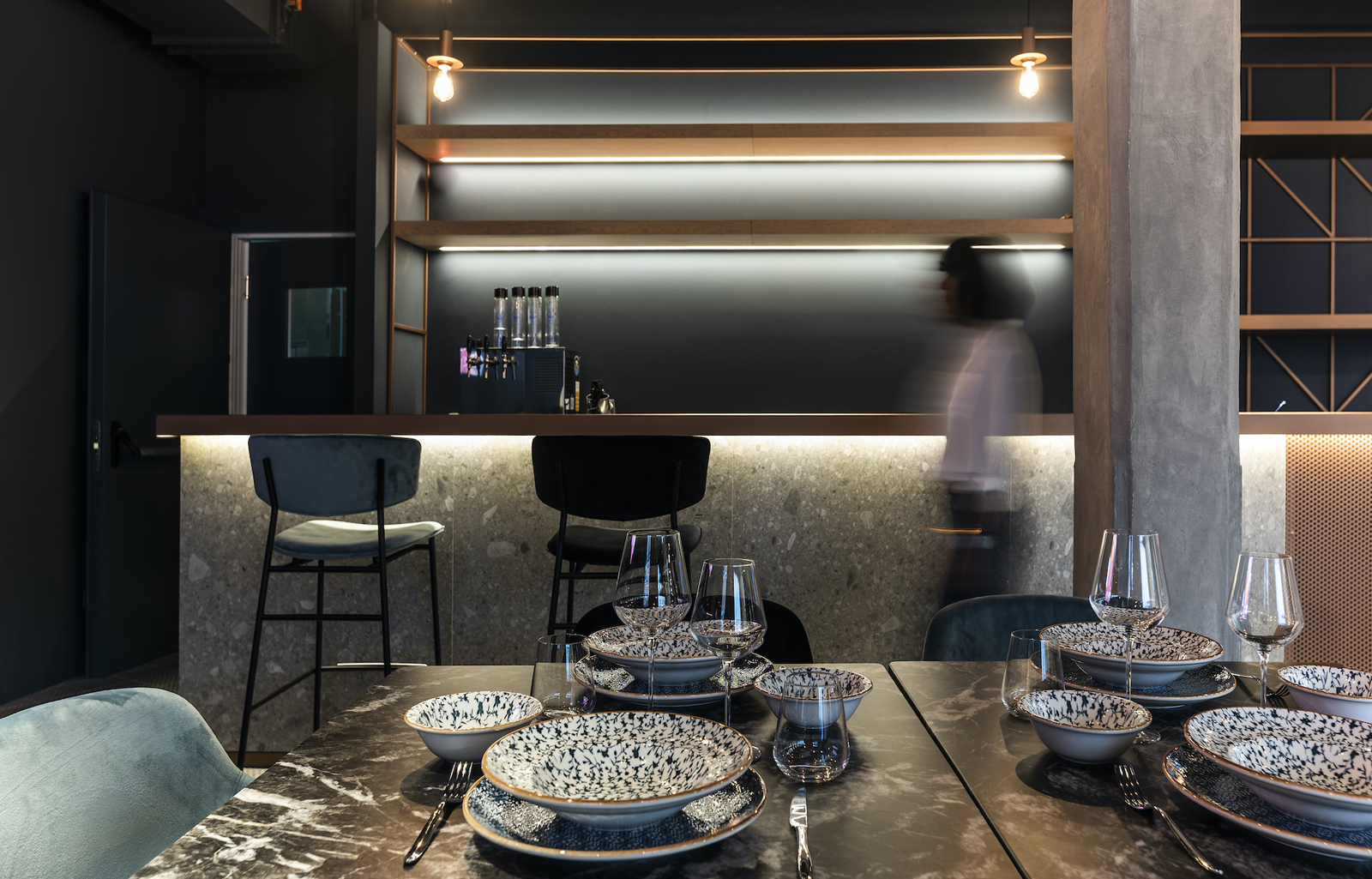 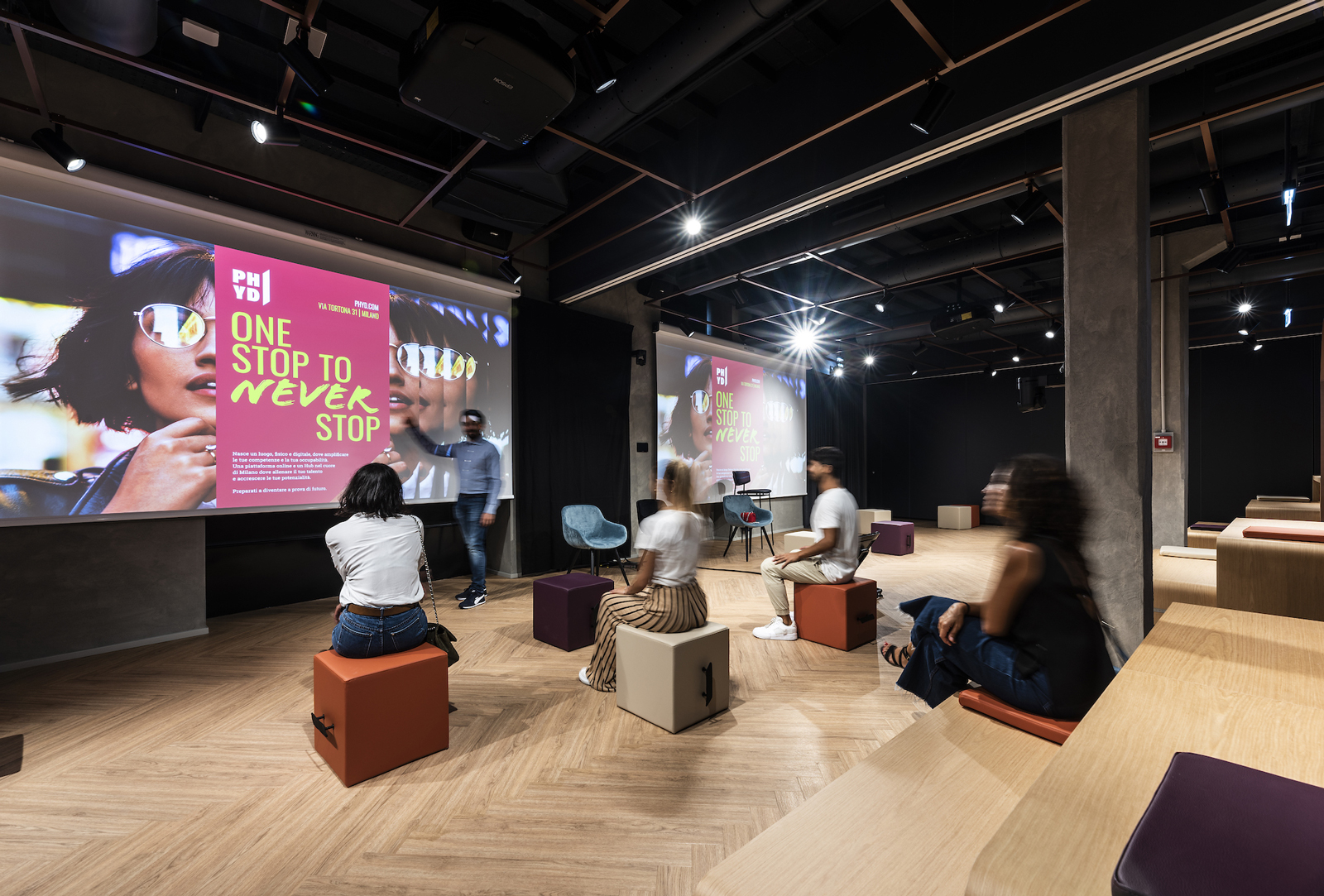 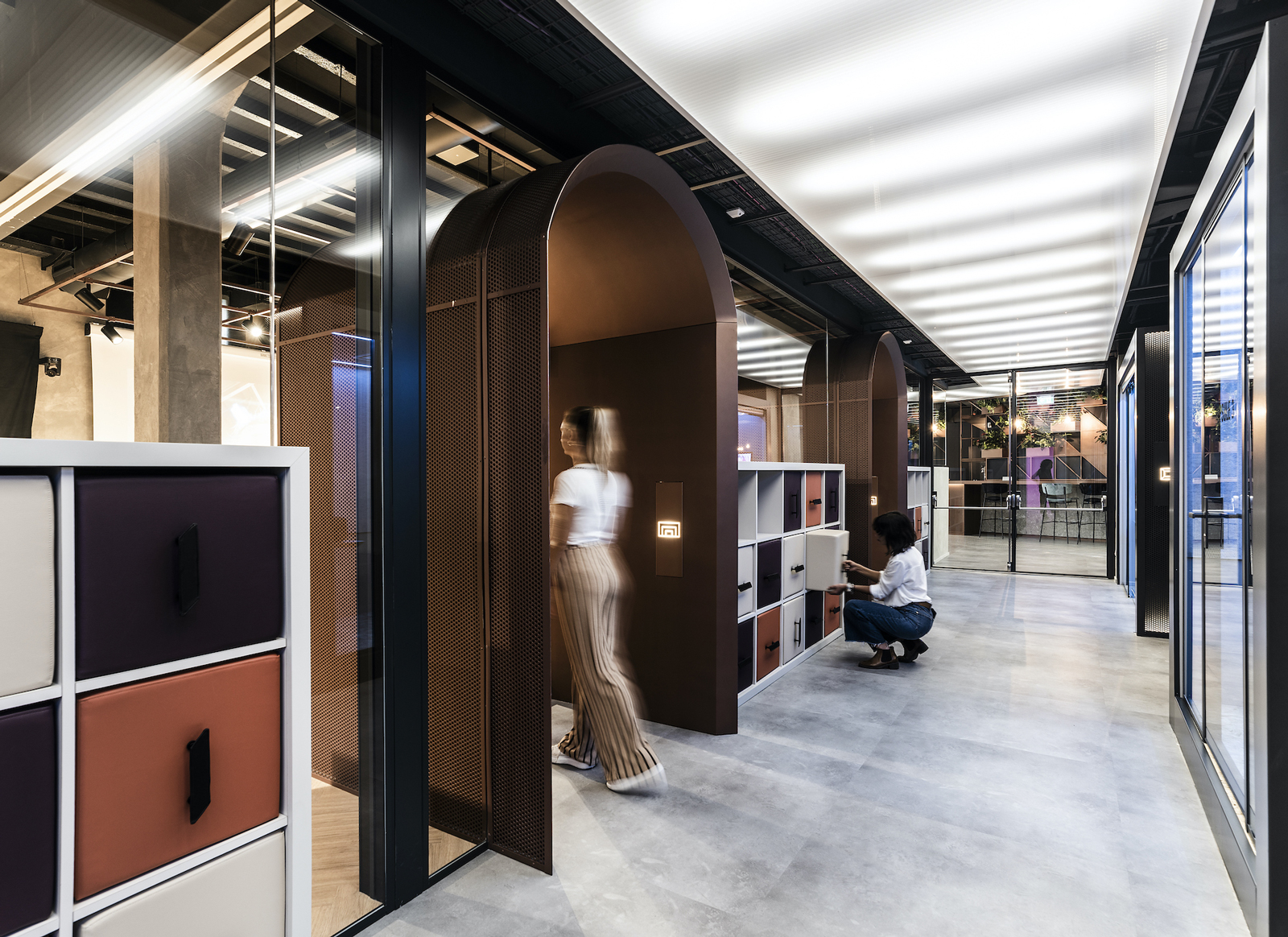 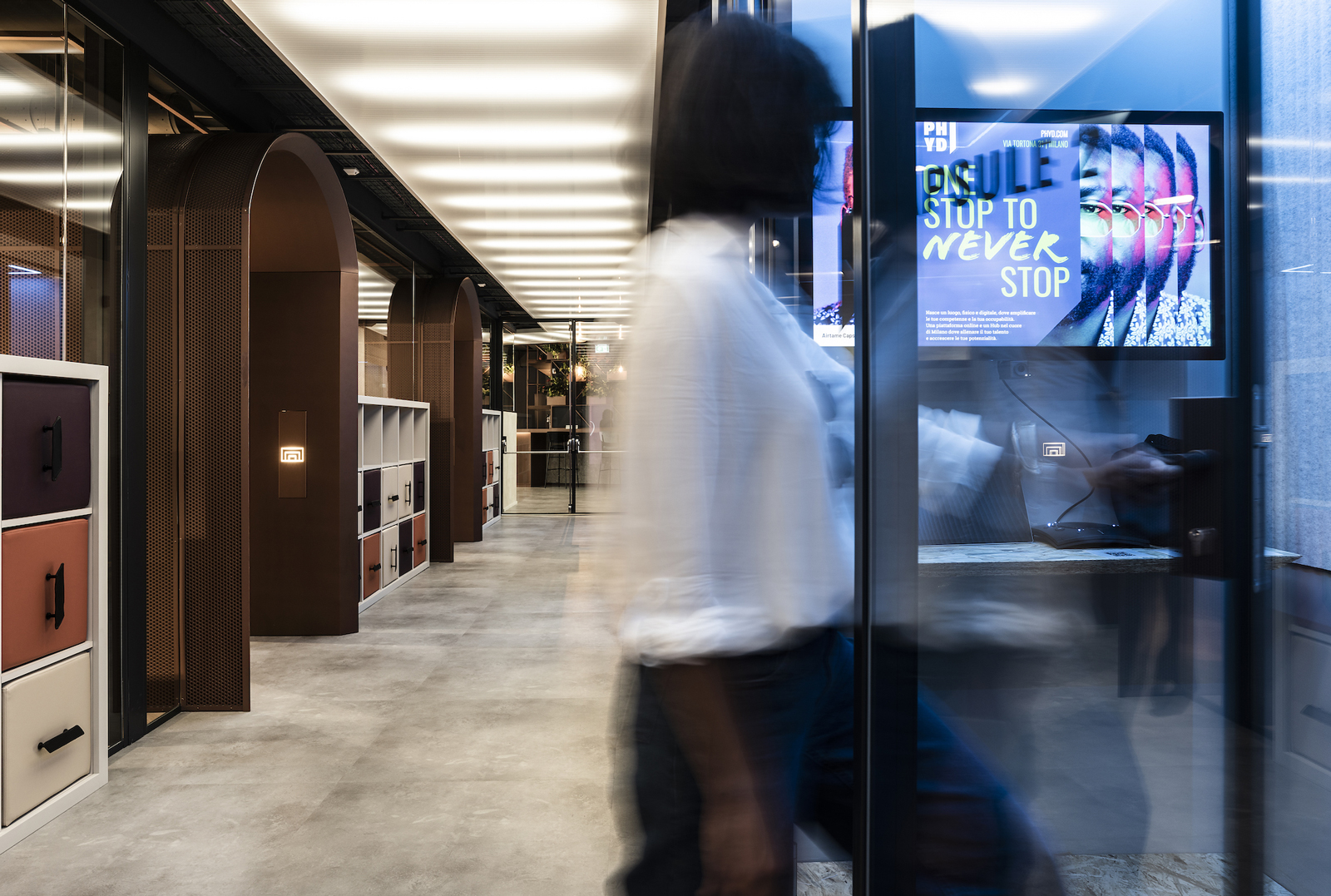 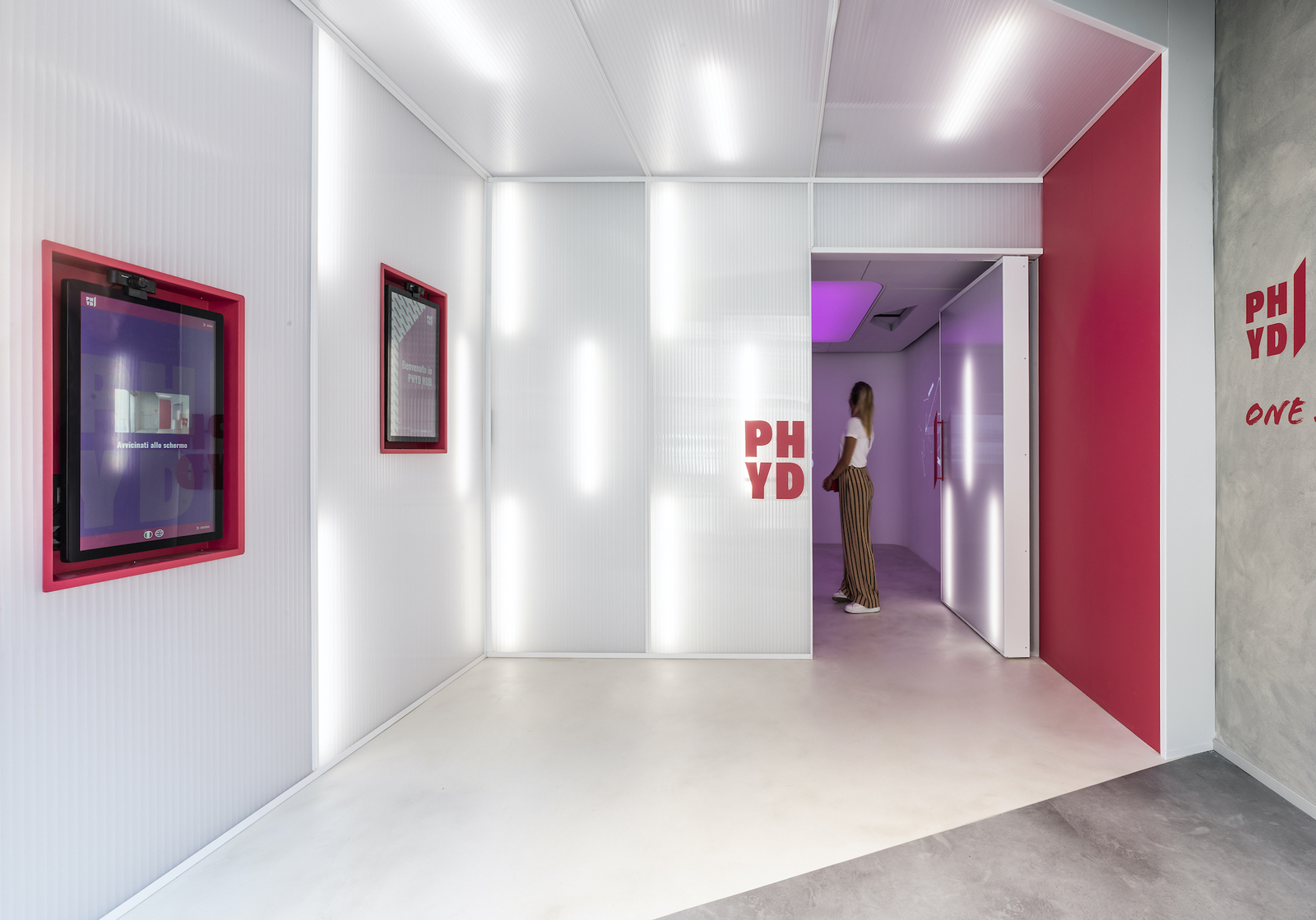 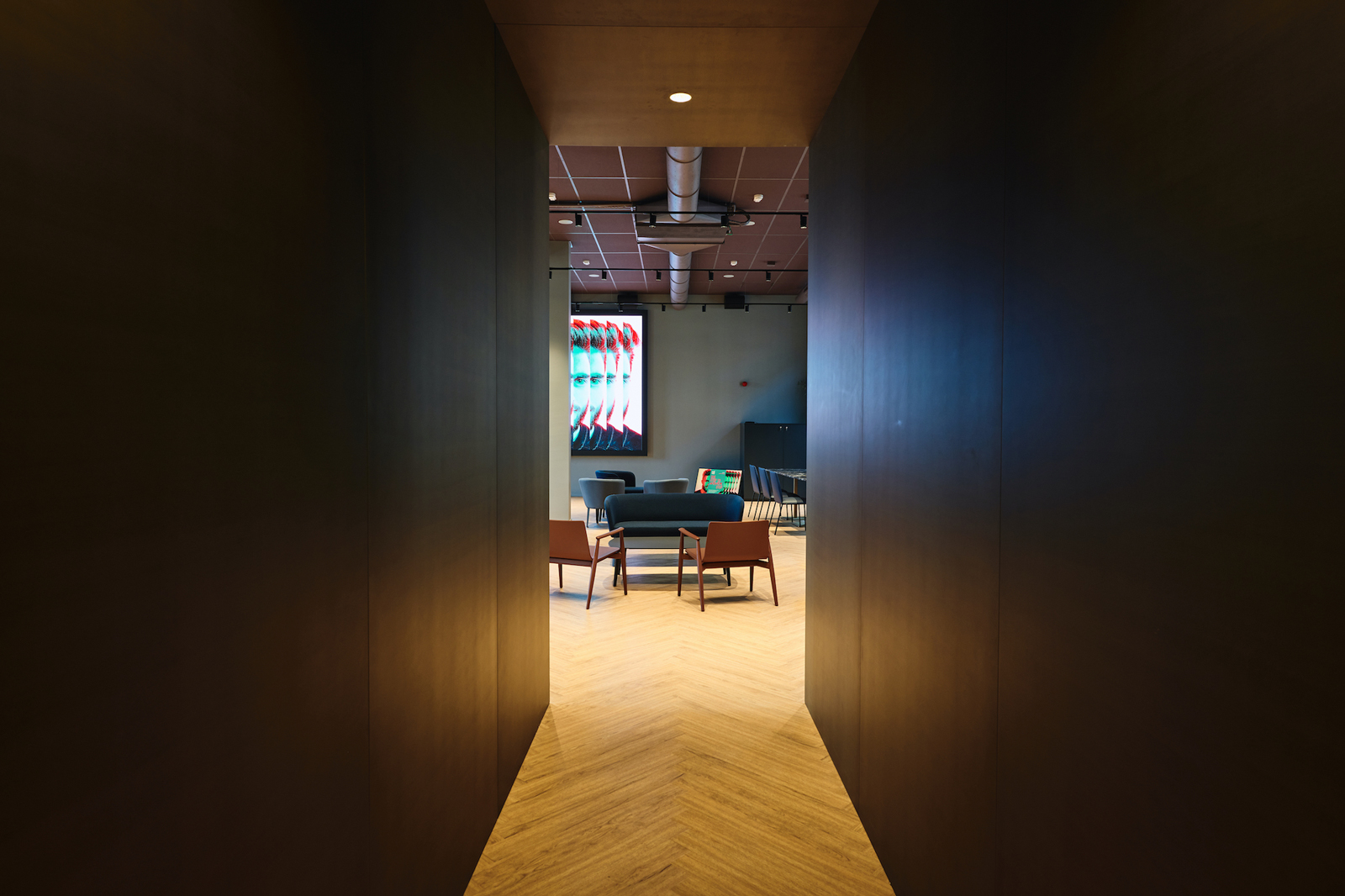 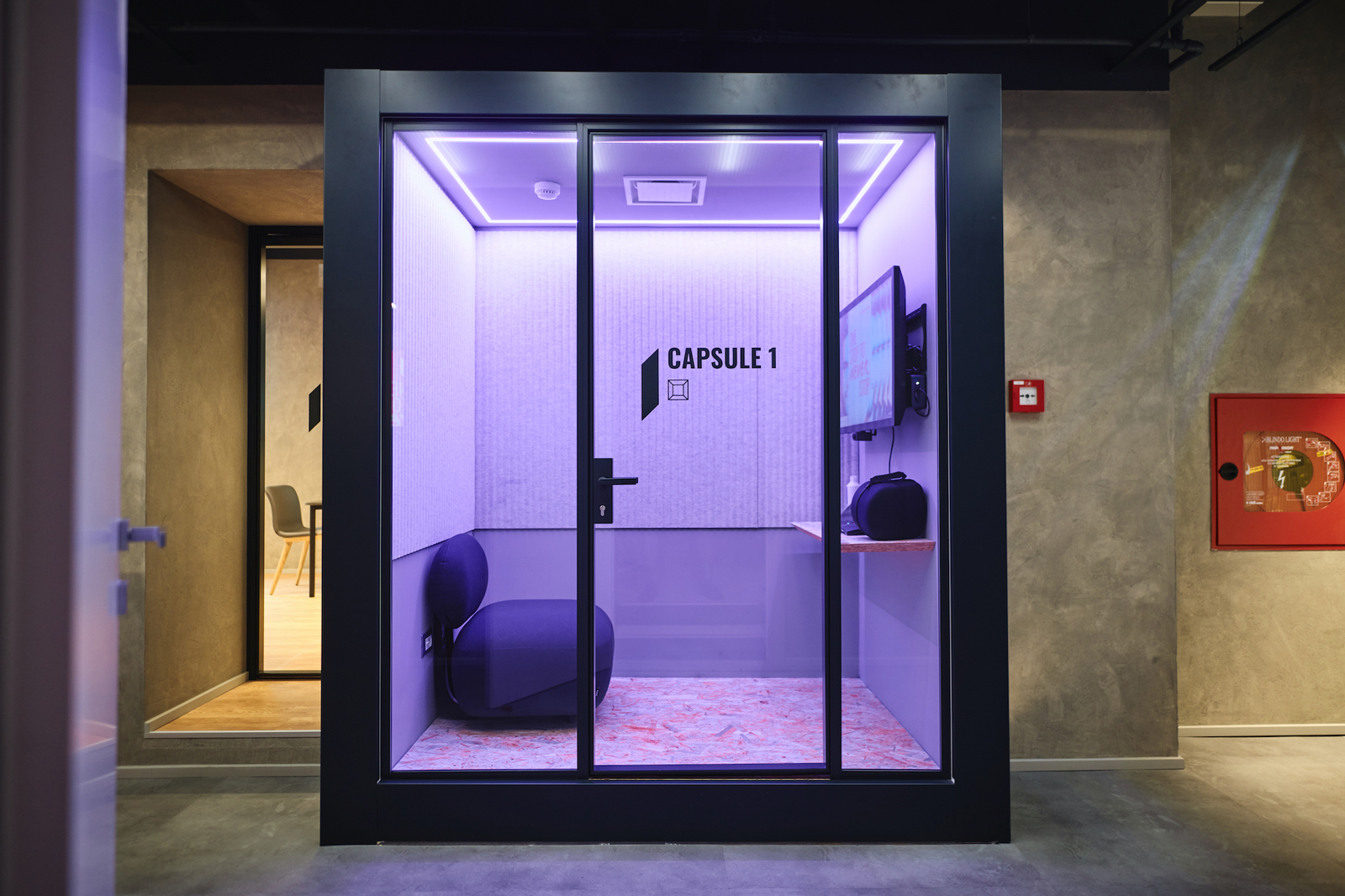 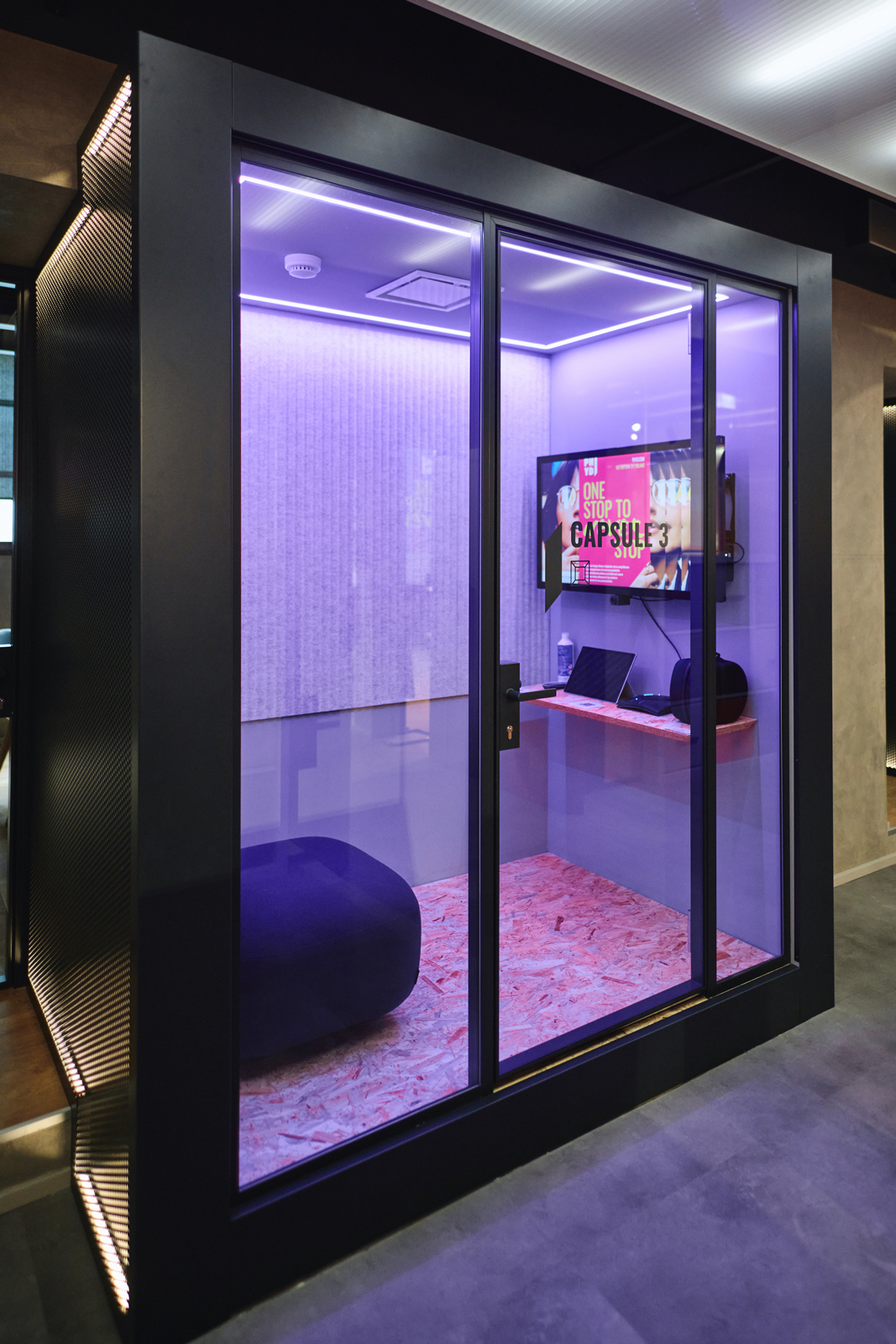 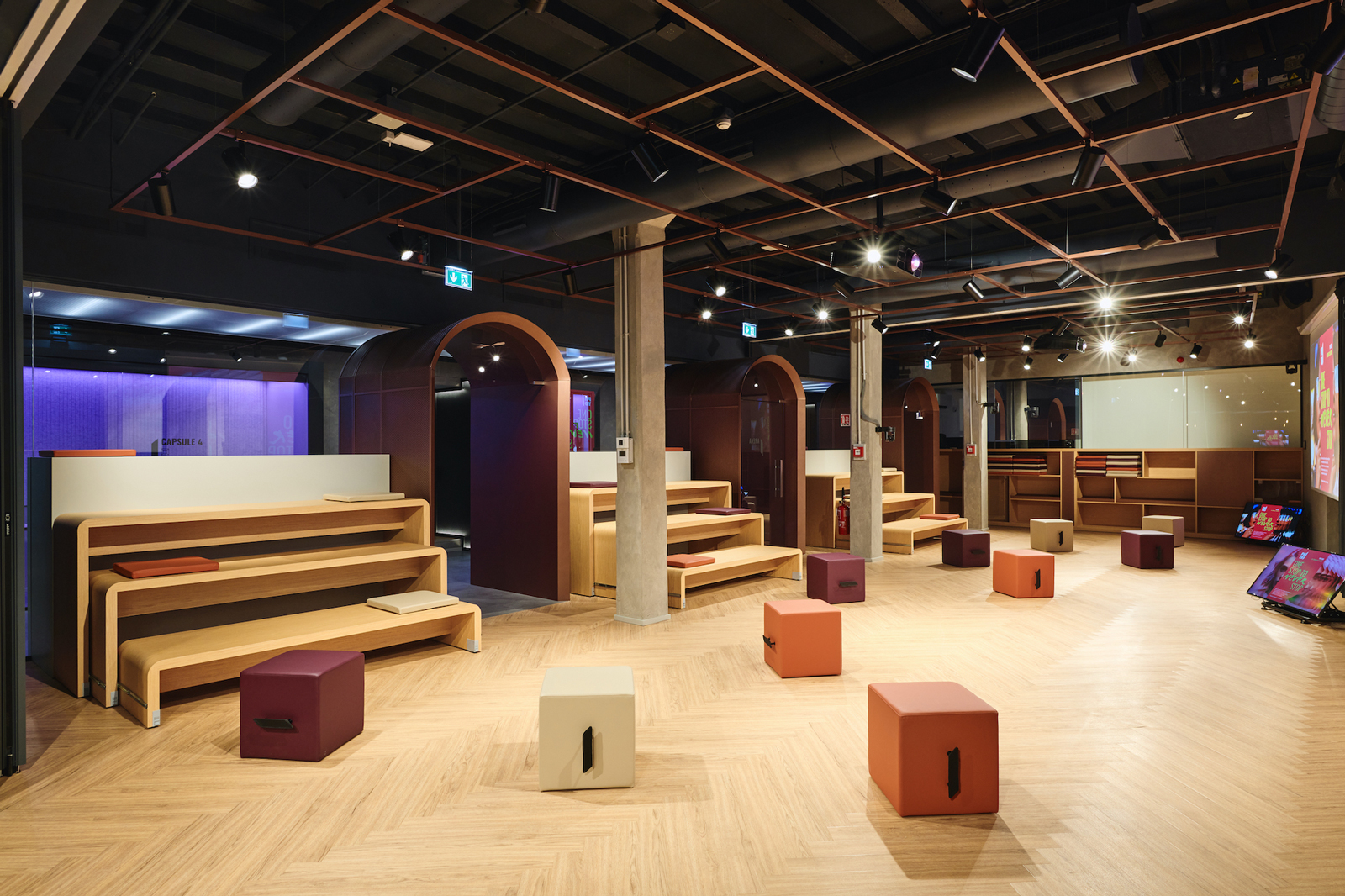 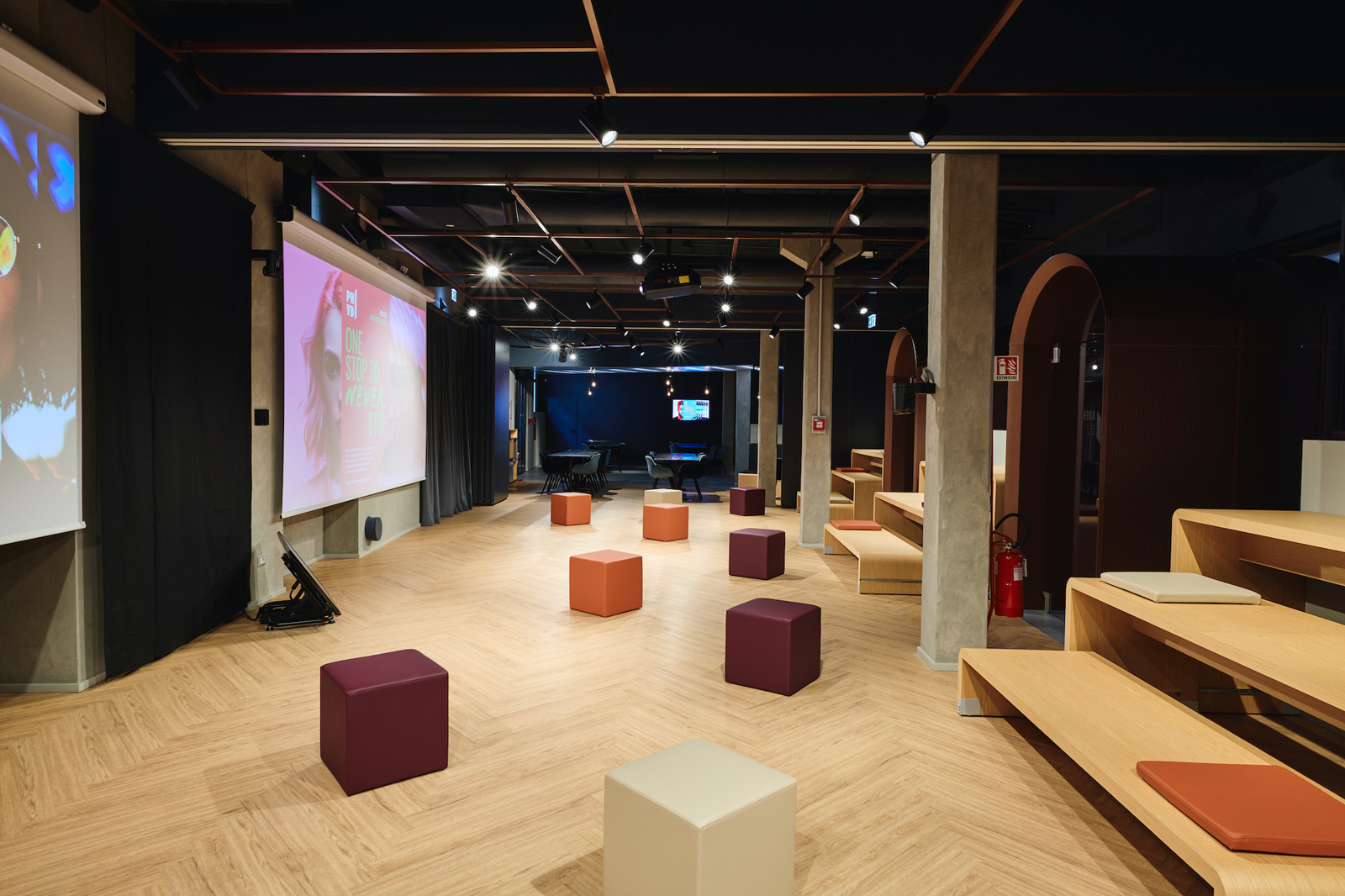 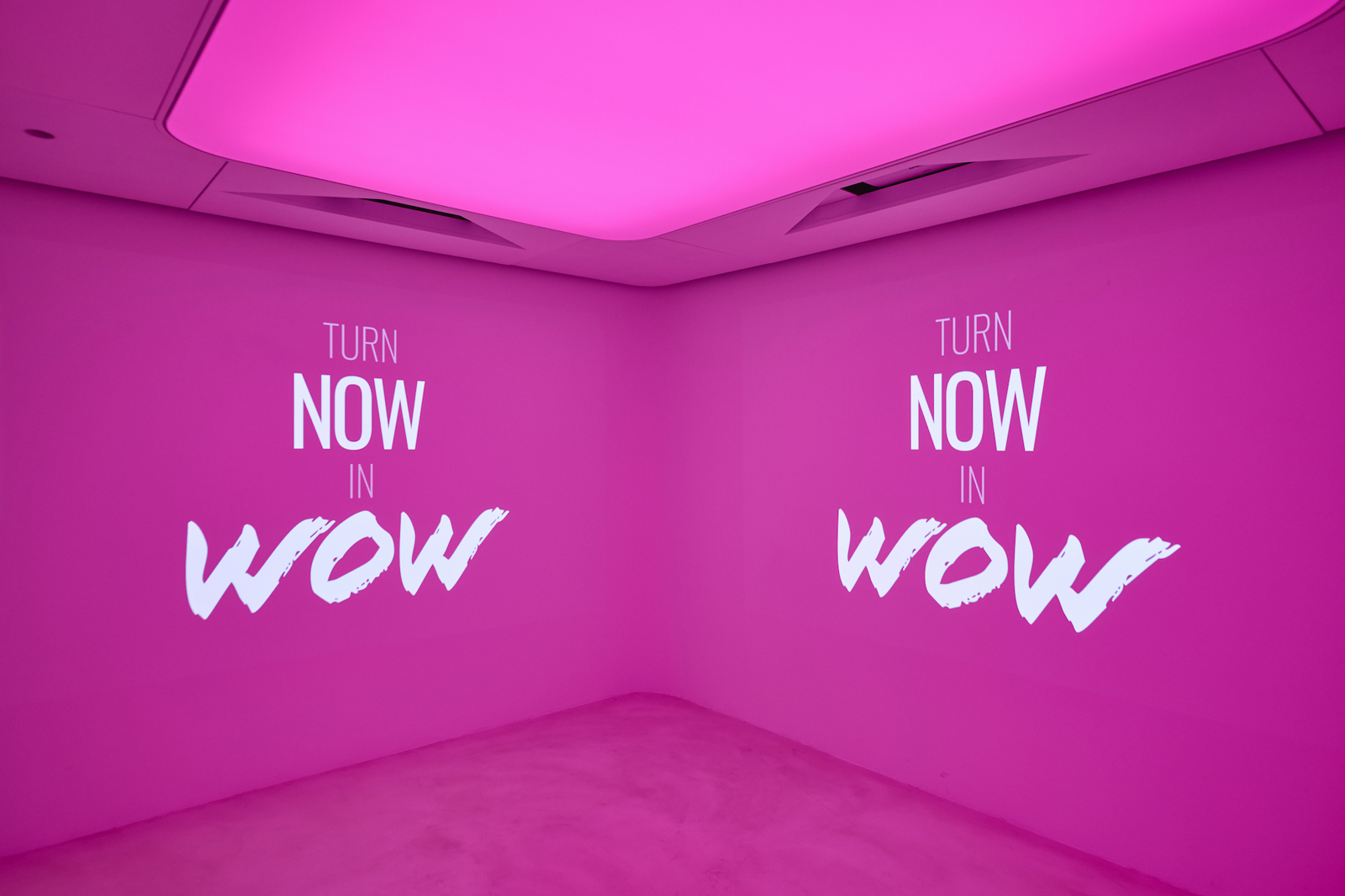 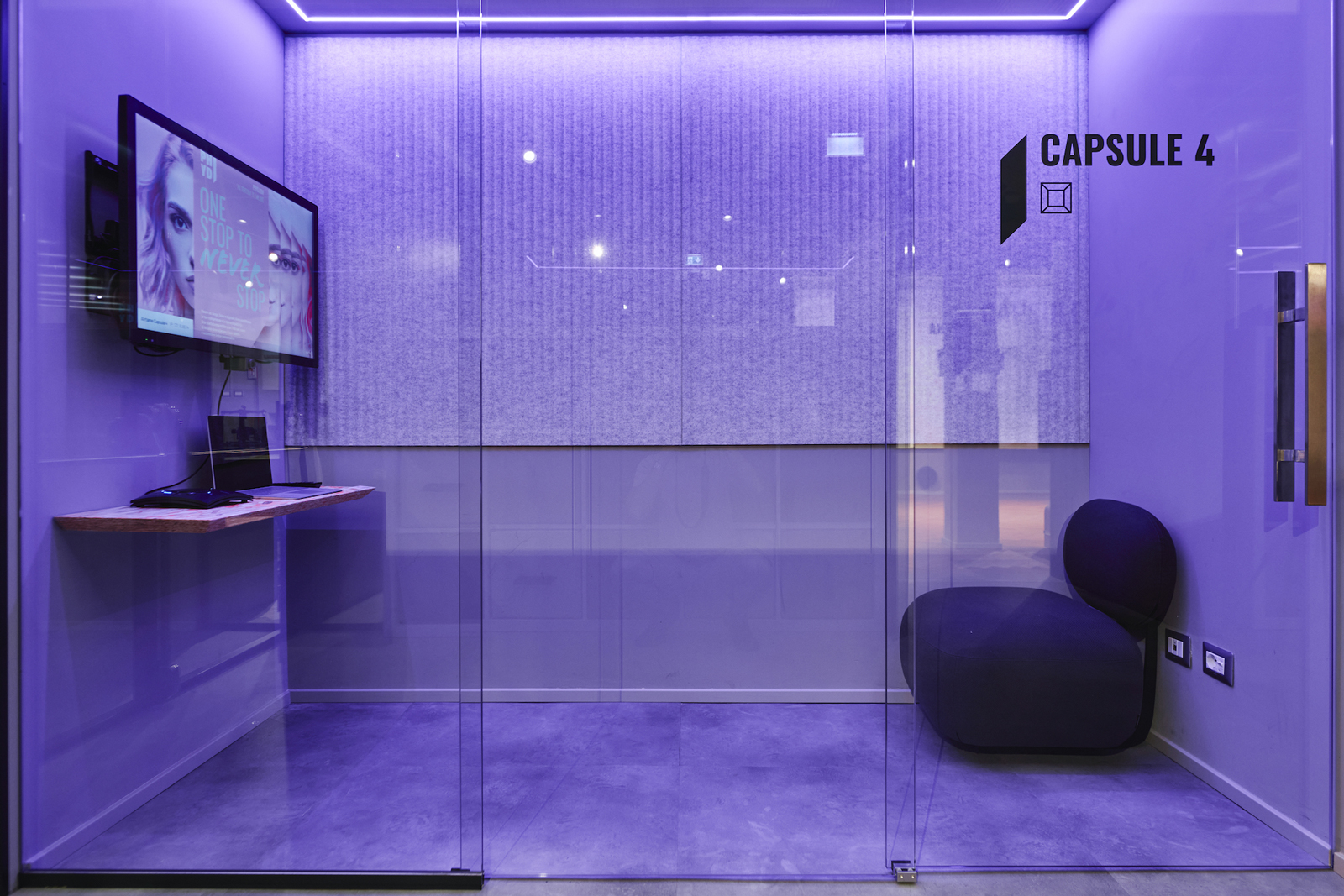 E-mobility and innovation, the Formula E racing cars in Rome