From the Transavanguardia to Oliviero Toscani. In Bologna, Italian youth strives for freedom

The urge to change gear and turn life around, through innovation and experimentation. A familiar scenario in the post Covid-19 era, but our society has gone through it before in the past 40 years. We are talking about the 1980s, one of the most interesting times in terms of artistic creativity since World War II. It was driven by Italian youth and is perfectly summarized in the title of the exhibition “I go to the Max. Chronicles of postmodern Italy”, which not coincidentally, is a quotation from the album by Vasco Rossi released on April 13th, 1982. The curator of the exhibition, which will be open till September 30th at the Galleria Enrico Astuni in Bologna, is Luca Beatrice, the art critic known for his curation of the Italian Pavilion at the 53rd Art Biennale in Venice and now a professor at the Accademia Albertina in Turin.

This exhibition does not seek to be a revival, but rather to convey the yearning for freedom, in young people in particular, that distinguished this time.

The context. The timeline reviewed by the exhibition starts in 1979, the darkest times of times during the “anni di piombo”, the “years of lead” that witnessed over 650 terrorist attacks on Italian soil. Nevertheless, the art of the time showed its earliest signs of change with the rise of the Transavanguardia. In 1980, for the first time, the Venice Art Biennale opened a section dedicated to young artists, “Aperto ‘80”, curated by Achille Bonito Oliva and Harald Szeeman. In addition to this showcase, conceived to give visibility to new trends in painting, Venice inaugurated its first Architecture Biennale that same year. This event marked the definitive dawn of the postmodern era which heralded the end of ideology and accompanied an unparalleled surge in the export of Italian design and fashion. This vitality translated into the advent of private television broadcasting companies and coincided with the victory of the Italian national football team at the World Cup, an event that left its mark on a generation, glorifying an era in which languages were constantly being jumbled in a mix between highbrow and lowbrow, academic disciplines and new forms of communication. 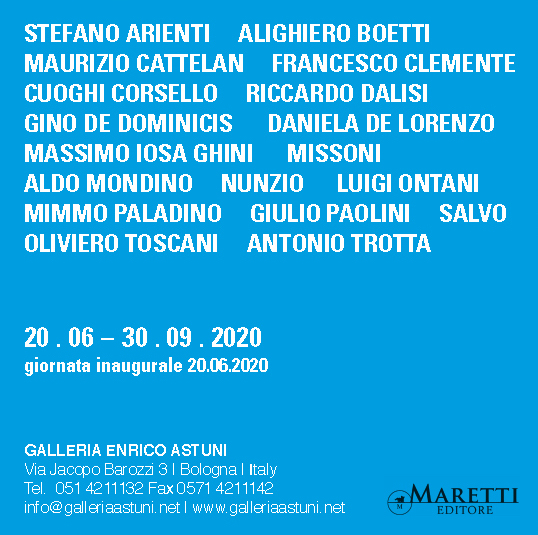 The flyer of the event

The exhibition. To convey the climate of the times and its many contradictions to the visitors, the exhibition displays the works of 18 Italian artists who were active in the 1980s. The curator’s goal was to include art forms that were unconventional at the time, such as fashion (with Missoni), photography (Oliviero Toscani), design and architecture (Massimo Iosa Ghini and Riccardo Dalisi). There is no attempt at highlighting any particular direction or language, but rather at presenting the multiplicity of the era in a horizontal approach free of prejudice. Alongside the works by Francesco Clemente and Mimmo Paladino, representing the Transavanguardia, and Nunzio, an exponent of the New Roman School, visitors will find artists who began their careers in earlier decades but in the 1980s developed essential aspects of their poetics. They include among others Luigi Ontani, Antonio Trotta, Aldo Mondino, Giulio Paolini and Gino De Dominicis. The exhibition also displays the production of artists who emerged in those very years and worked across Italy: Cuoghi Corsello and Maurizio Cattelan from Bologna, Stefano Arienti from Milan and Daniela De Lorenzo from Florence.

Art and agriculture. Garutti in the Venetian landscape of Ca’ Corniani