Regeneration in Rome, based on content and cooperation. Working together, a collective of architects, artists and film producers

Nine years after it was converted into a co-working space, the former Vaccheria Riccioni opened its doors to the public with an intensive calendar of events. This is Rome, north of the Portuense district, behind the Trastevere station. The spaces of an early twentieth-century cattle farm are occupied by a bustling collective of architects, craftsmen, artists, designers and film producers, who want to make their work a shared experience.

This is Portuense201, the name of the group that has gathered around the figure of Manuela Tognoli, a designer who was responsible for the renovation of the complex and who founded the first exhibition space in the restored buildings.

“The stall, which has now become the headquarters for Label201, she explains, has preserved the original volumes and surfaces, leaving in place the layers of paint that have stratified over time on these walls, to dialogue with the contemporary materials and surfaces.”

The launch of the first season of workshop workshops held in this unusual version of a farm, is an opportunity to rekindle the theme of places lost to the eyes of most, which often serve as hothouses for experimenting with hybrid initiatives.

Area. The structure, located nearby to the former Mira Lanza factory (the object of a competition just launched by the City of Rome as part of the Reinventing Cities programme www.ppan.it/stories/roma-reinventing-cities-5-aree/) and the Mulini Biondi mills (recently converted into a residential and shopping complex), is part of the Roman industrial zone which for years has been the site of a plan that featured a pilot project for the Mercati Generali markets in Via Ostiense (yet to be transformed) and the complex of the former slaughterhouse, the Mattatoio di Testaccio.

Evolution. Since 1912, the year in which Rosa Riccioni presented the project to build her dairy farm, number 201 has undergone a transformation process that has enhanced its architectural and spatial qualities. Gradually abandoned in the 1950s, it was restored in 2011 and converted into a creative workshop. 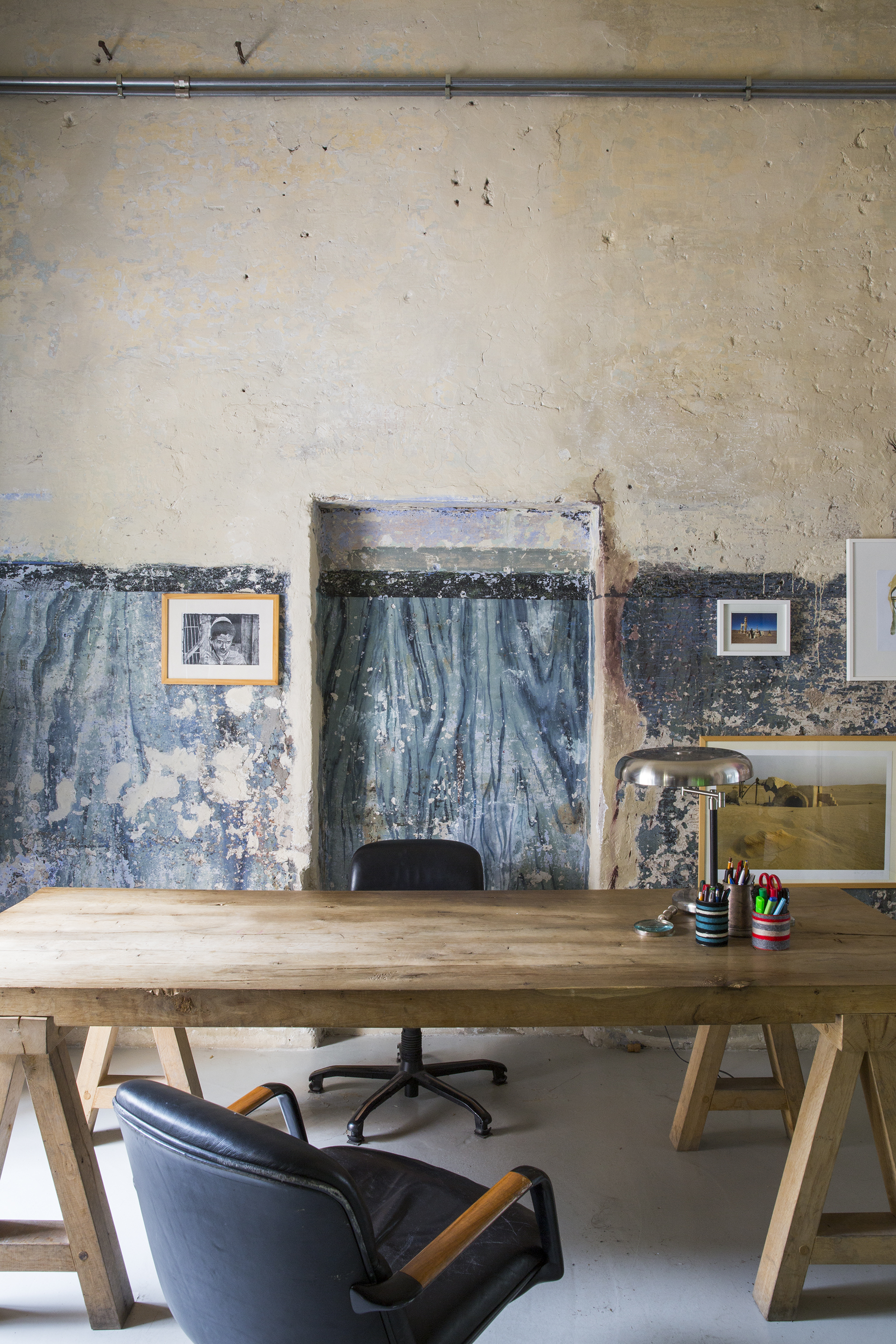 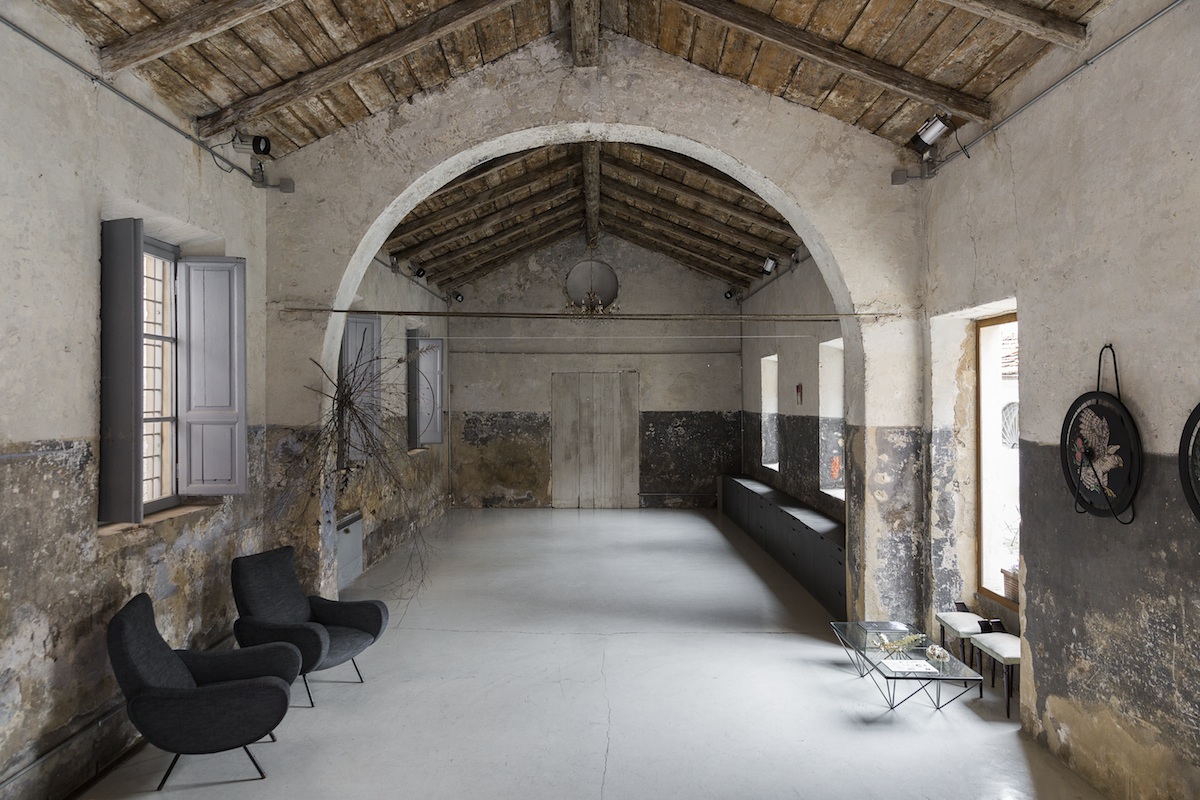 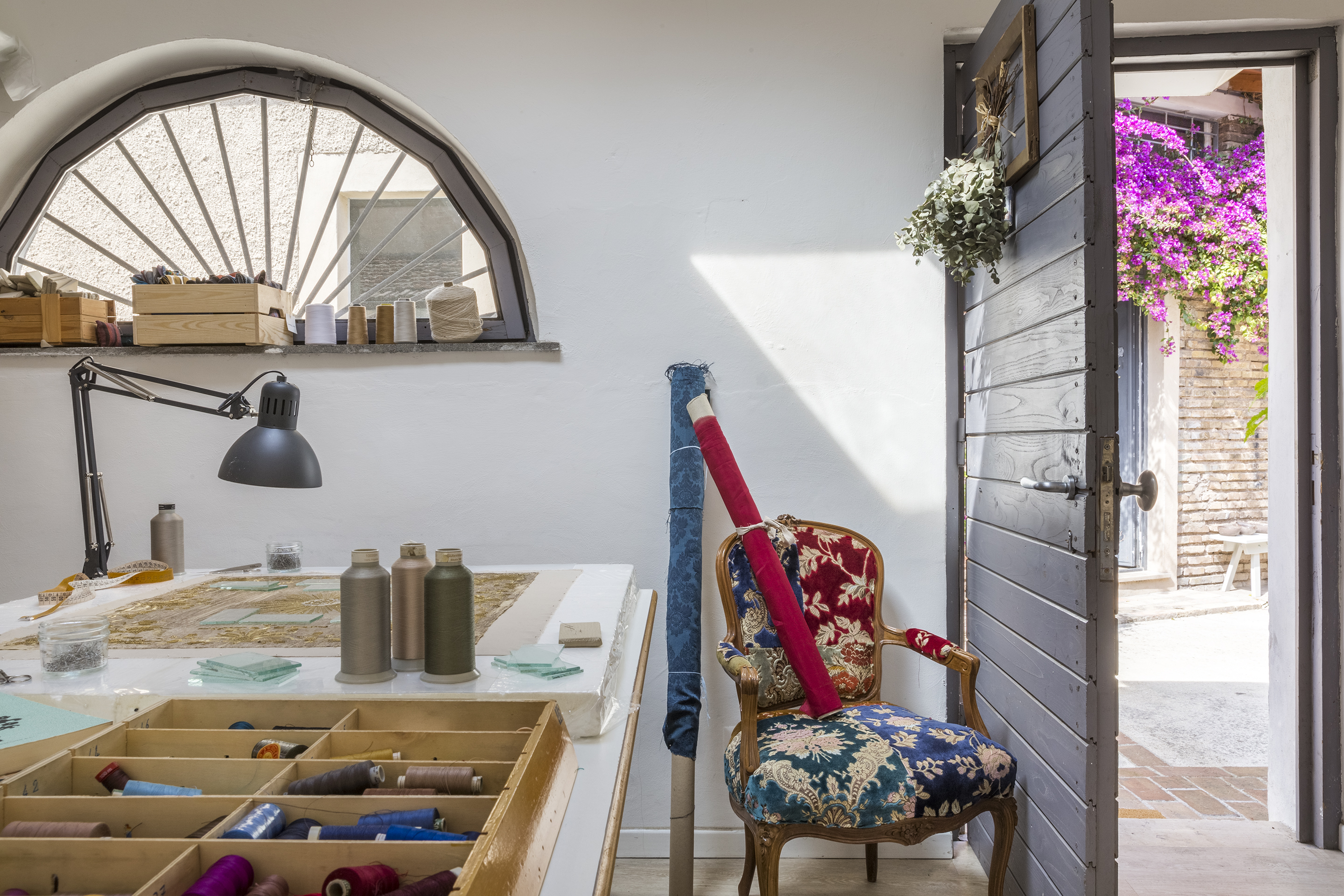 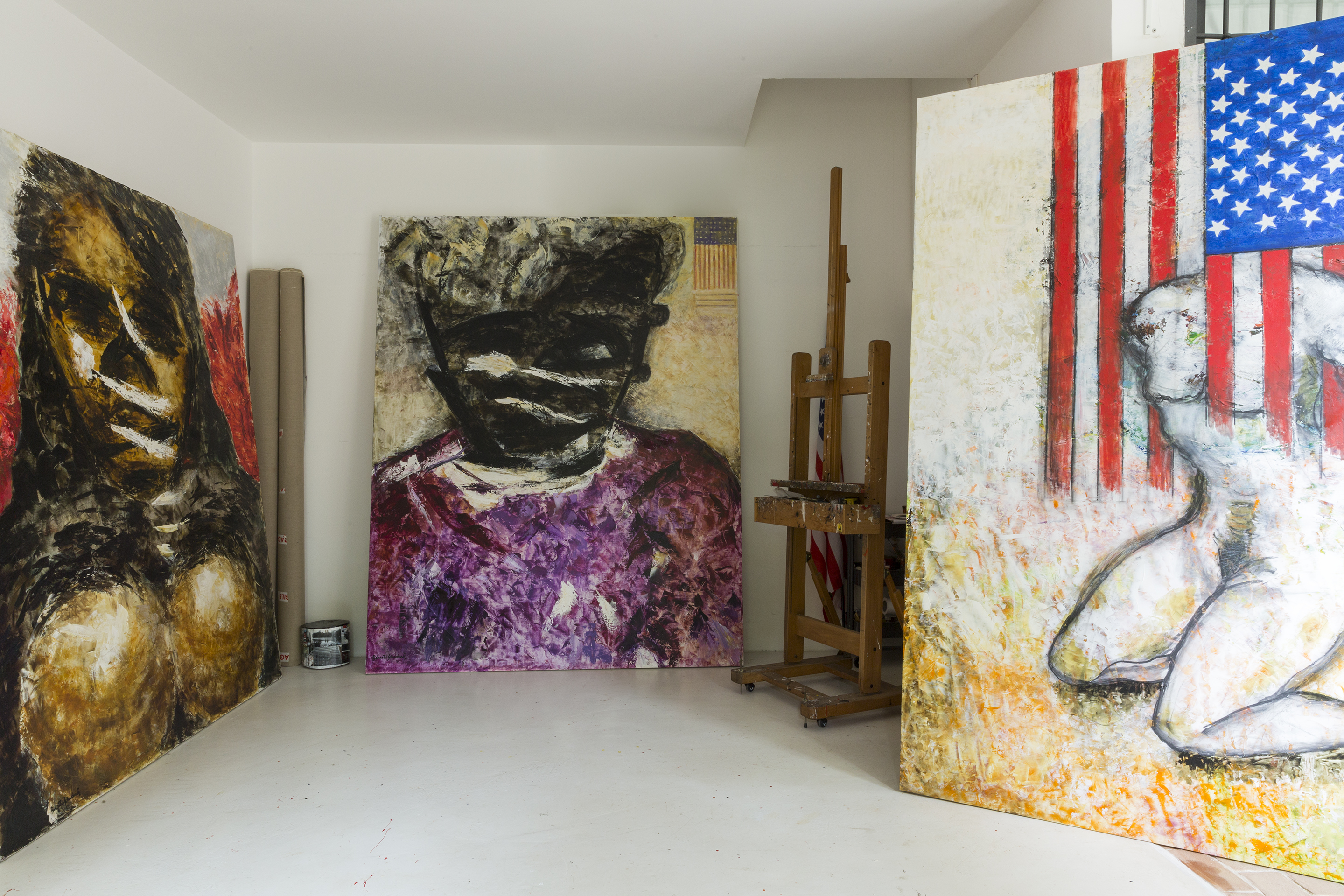 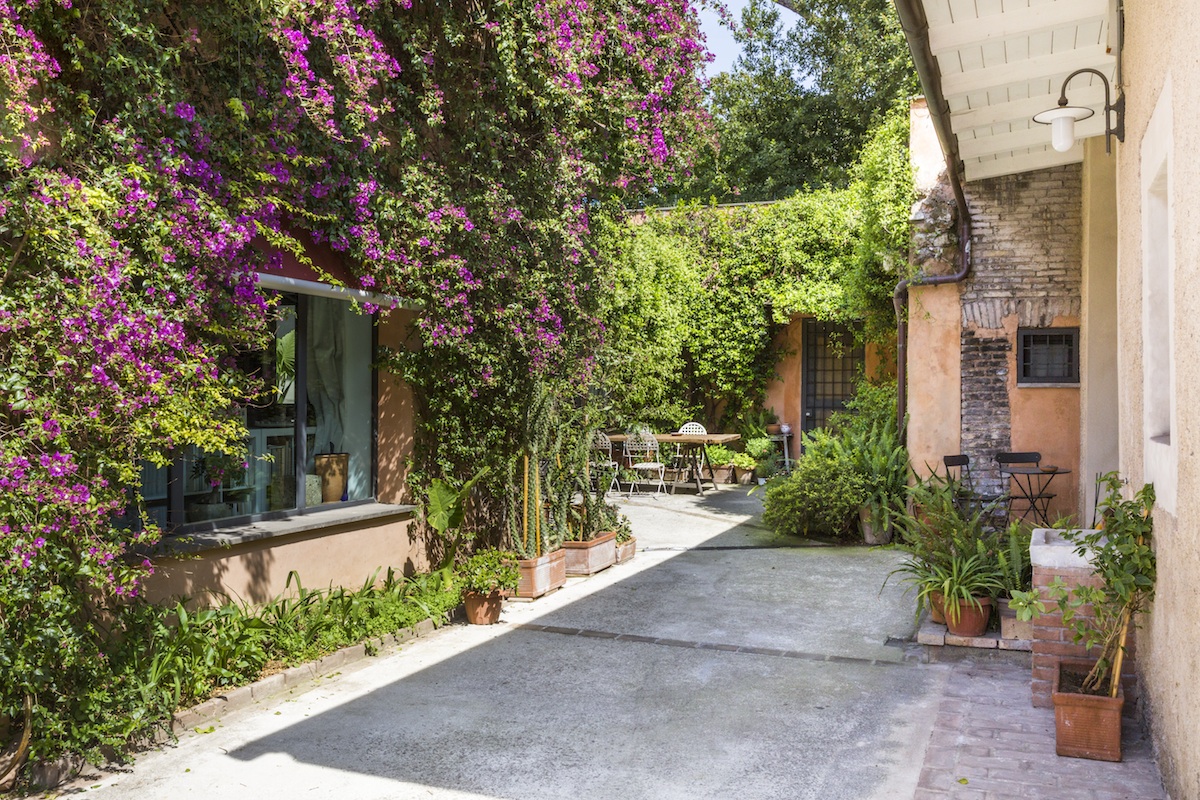 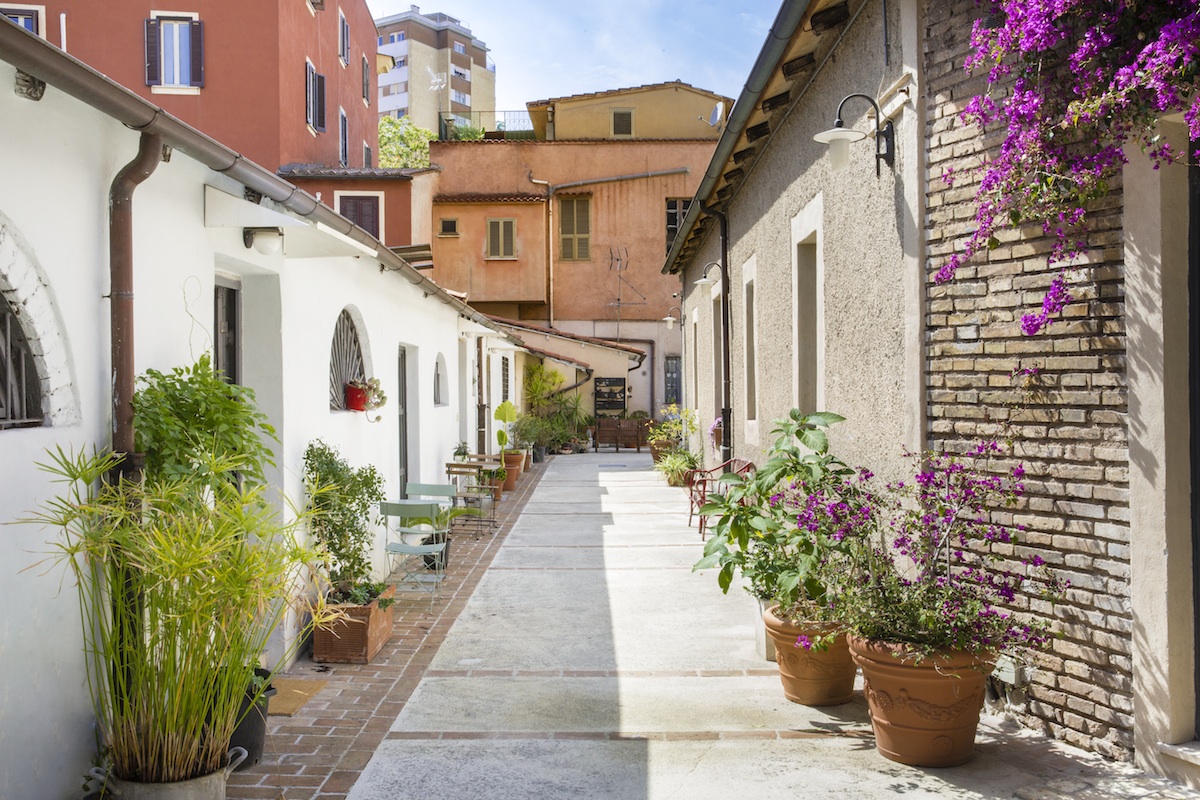 In the dense urban fabric, the former cattle farm still displays its rural qualities: a glimpse of a country village wedged into a consolidated urban context.

“Renovation and conservation – explains architect Tognoli, are the key words for the entire project, from the point of view of the container, as well as the interiors, and wherever possible.”

The human and family scale is fertile ground for invention and talent: between low buildings, pitched roofs, rough plaster and climbing plants, the dynamics never wane and the group of creative professionals organizes events that range from floral design to fabric restoration. The goal is to open the doors to others, not just those who live and work there.

The idea behind Portuense201 is that of a contemporary cultural district, which since 2011 has continued to add names to its carnet, and now counts 15 professional businesses (with a significant contingent of women). Artisans and promoters of an originality intimately tied to complexity and cross-pollination, themes that indicate the added value required for a contemporary redefinition of quality products.

Over the years – reads the project introduction – we have built a place that is alive and rich in human and professional synergy. The results we have achieved this year include the exhibition Still Moving and an initial calendar of Workshops, which will transmit the spaces and experiences of P201 to the community.

Future challenges. February 2020 will kick off the first series of seminars, with a schedule that run through May. Open doors to students, professionals and design lovers, who will display the projects they developed during the classes held in the spaces of Label201.

With this work, the Via Portuense group is seeking to spread awareness of materials and traditions with a contemporary approach. For everyone, the key to success lies in cooperation: each workshop is conceived by two or more studios, within a logic that encourages cross-pollination between different professional fields, in a space that is a melting pot of periods, realities and styles. 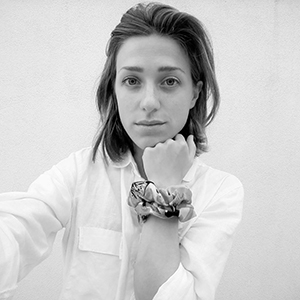