An elegant space designed by CLS architects for the restaurant, an electric vehicle for natural foods in the street-food version 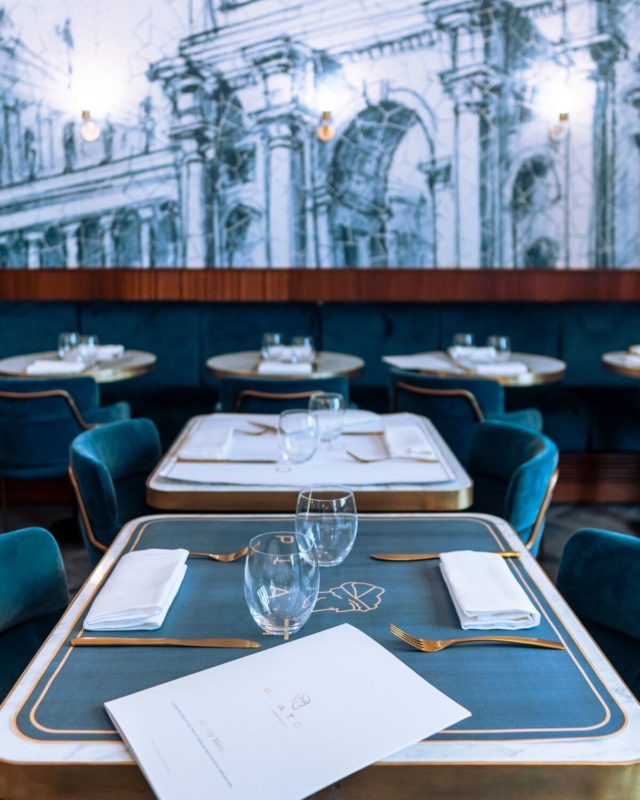 Vitamins, minerals, anti-oxidants and fibres are the stars of Plato Chic Superfood, the new venue that just opened its doors in Milan with the purpose of raising awareness in its customers towards the concept of healthy, positive, delicious nutrition. All of this in an elegant space designed by CLS architects, carefully studied – like the menu – down to the smallest detail.

The project is the result of research studies conducted by a group of creatives and professionals led by Attilio Speciani, a doctor and nutritionist, and Mariangela Affinita, the owner and CEO of the company. Working with them, during the start-up phase to define the initial menu, was Davide Castoldi, a private chef who cooks for individuals and companies. Two years later, just a few months ago, Plato Chic Superfood opened in Milan, just steps away from the Court Building: its menu revolutionized our idea of food and nutrition. Dedicated to everyone who is familiar with or wishes to explore the latest in food and wine, who intends to enjoy innovative ingredients and flavours beyond the limits of traditional cuisine, without giving up their well-being.

Plato «nourishes, informs and activates a sense of wonder», reads the poster created for the purpose

«Tasting the food at Plato means acquiring a deep understanding of what we eat and satisfying our natural desire for taste every day, choosing fresh, healthy custom-prepared foods – explains the owner, trained in Economics and Management at the Luiss in Rome. The name is an obvious reference to Plato’s myth of the cave, because everything arises from our knowledge of ourselves, our bodies and the foods that help us face life with energy and passion».

Ensuring nutrition intelligently does not mean having to give up flavour. And Plato – open for breakfast, lunch, happy hour and dinner – proves it with its dishes prepared by chef Fabio Di Martino based on what are known as superfoods, food that is healthy and rich in nutrients, sometimes from faraway countries. 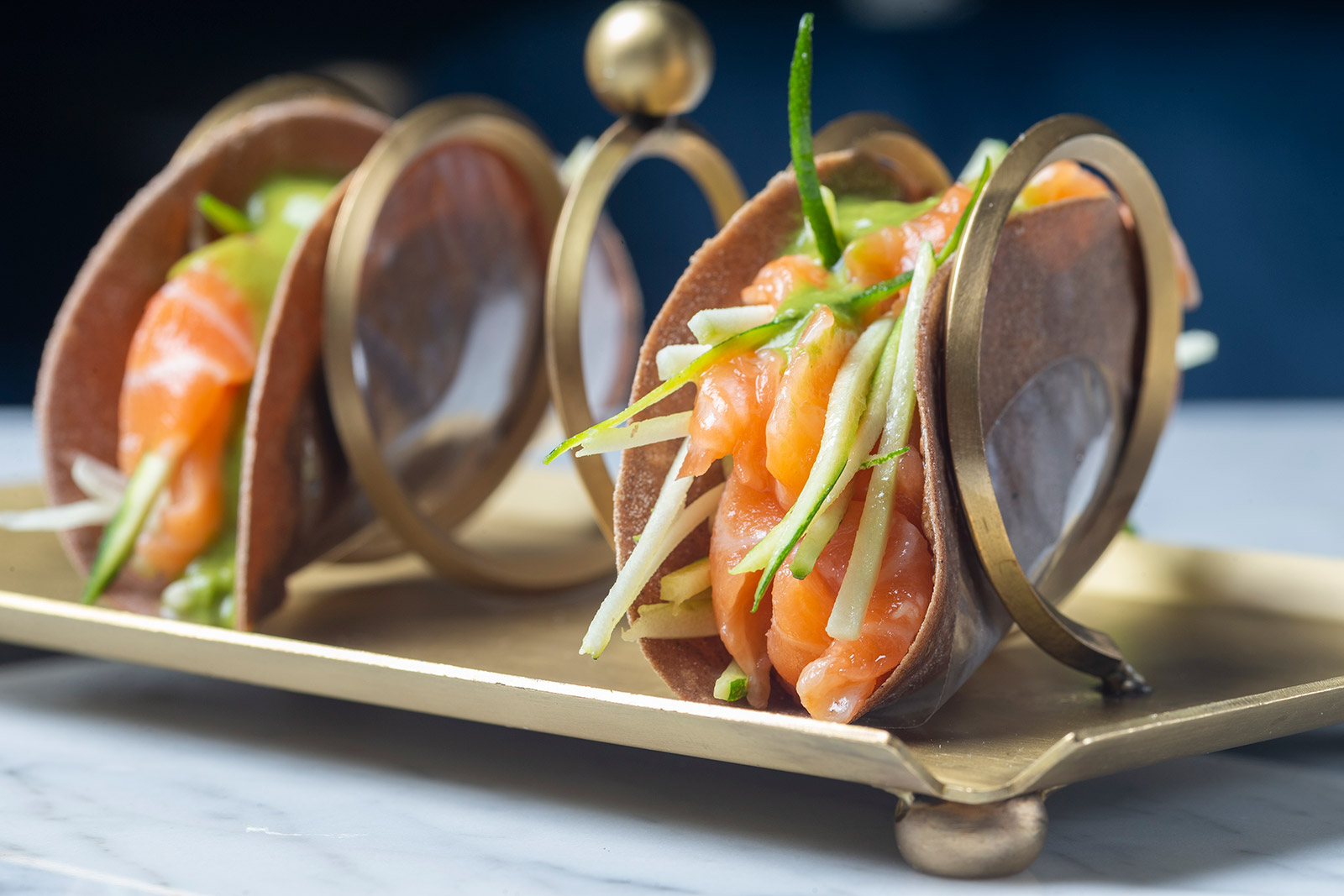 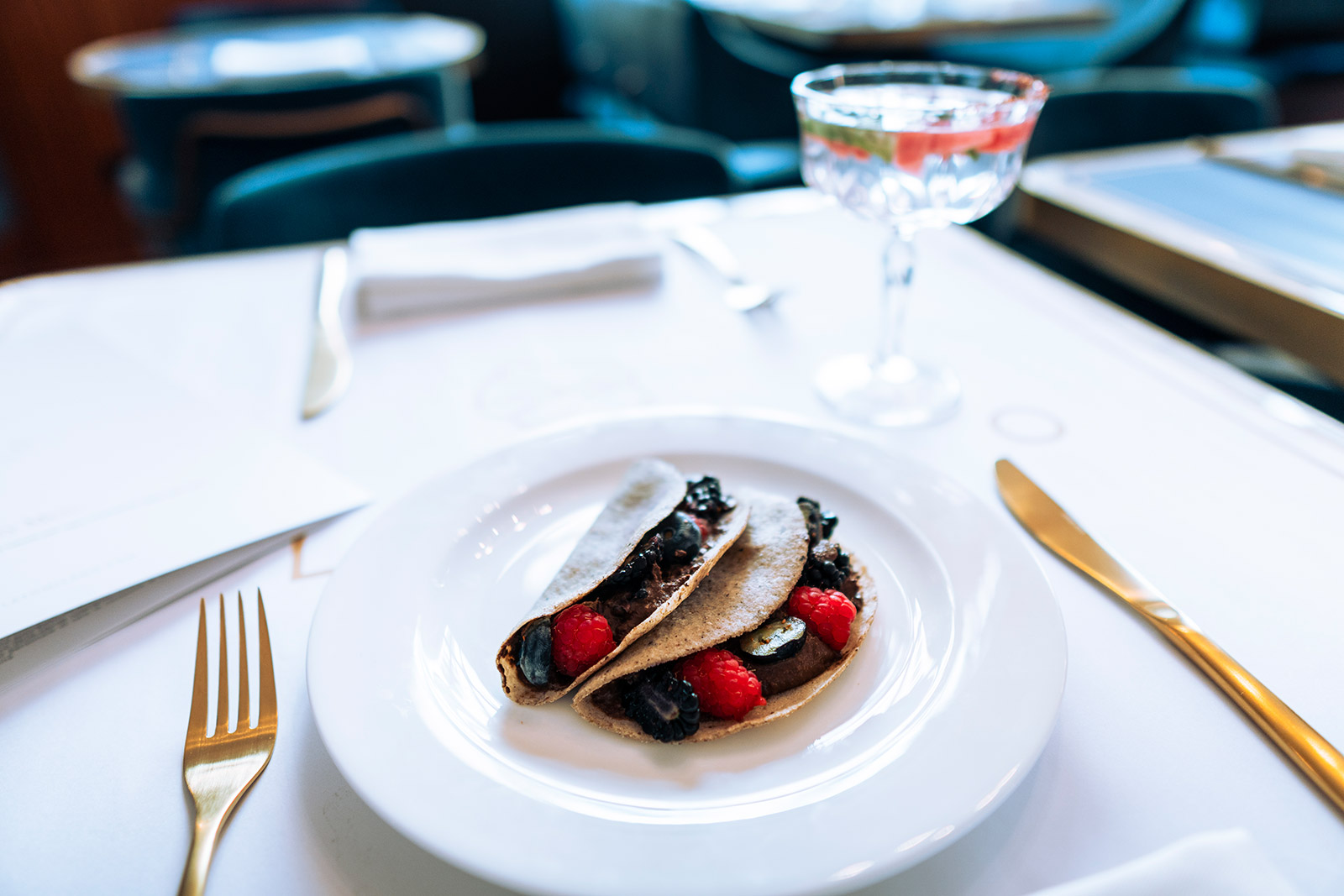 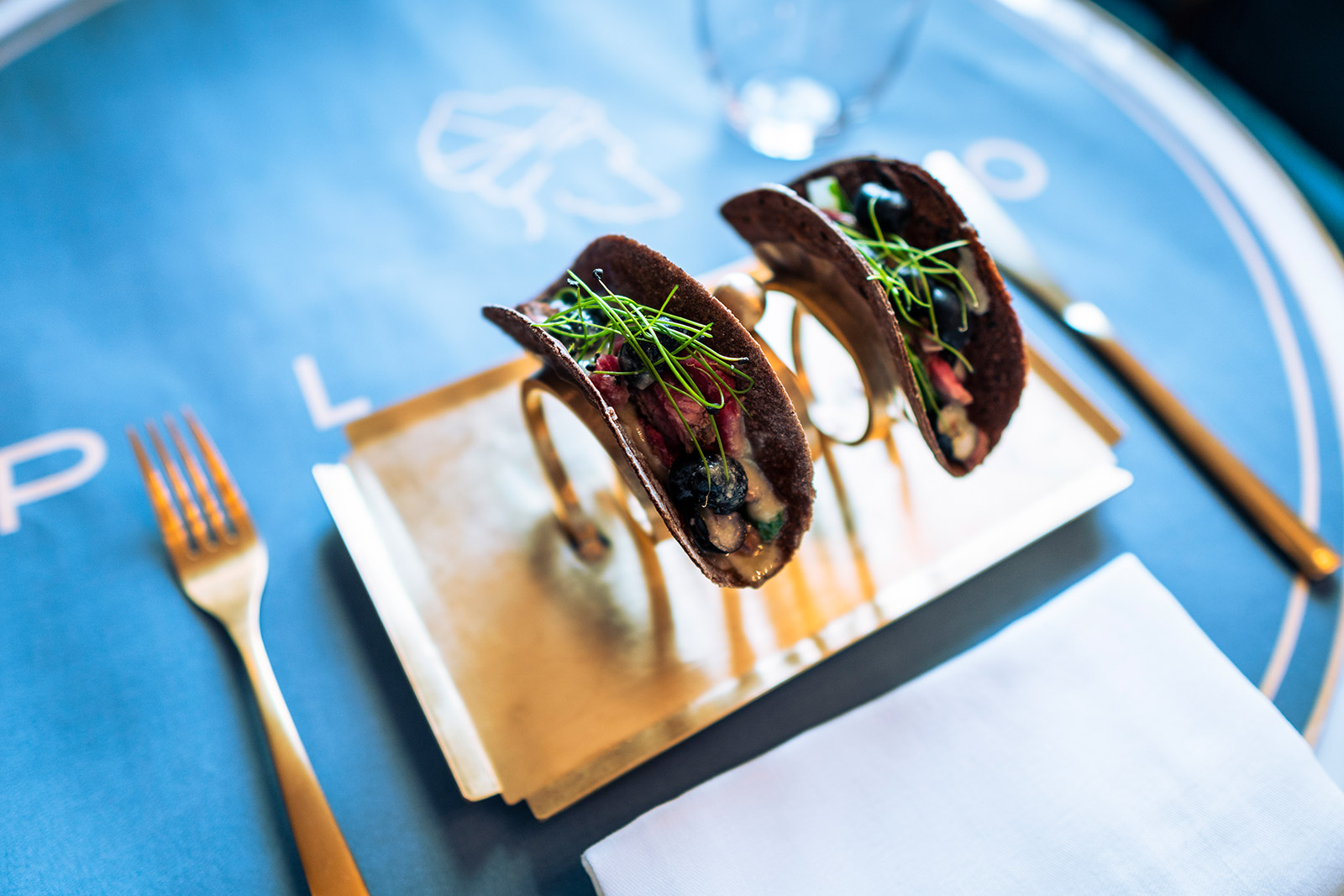 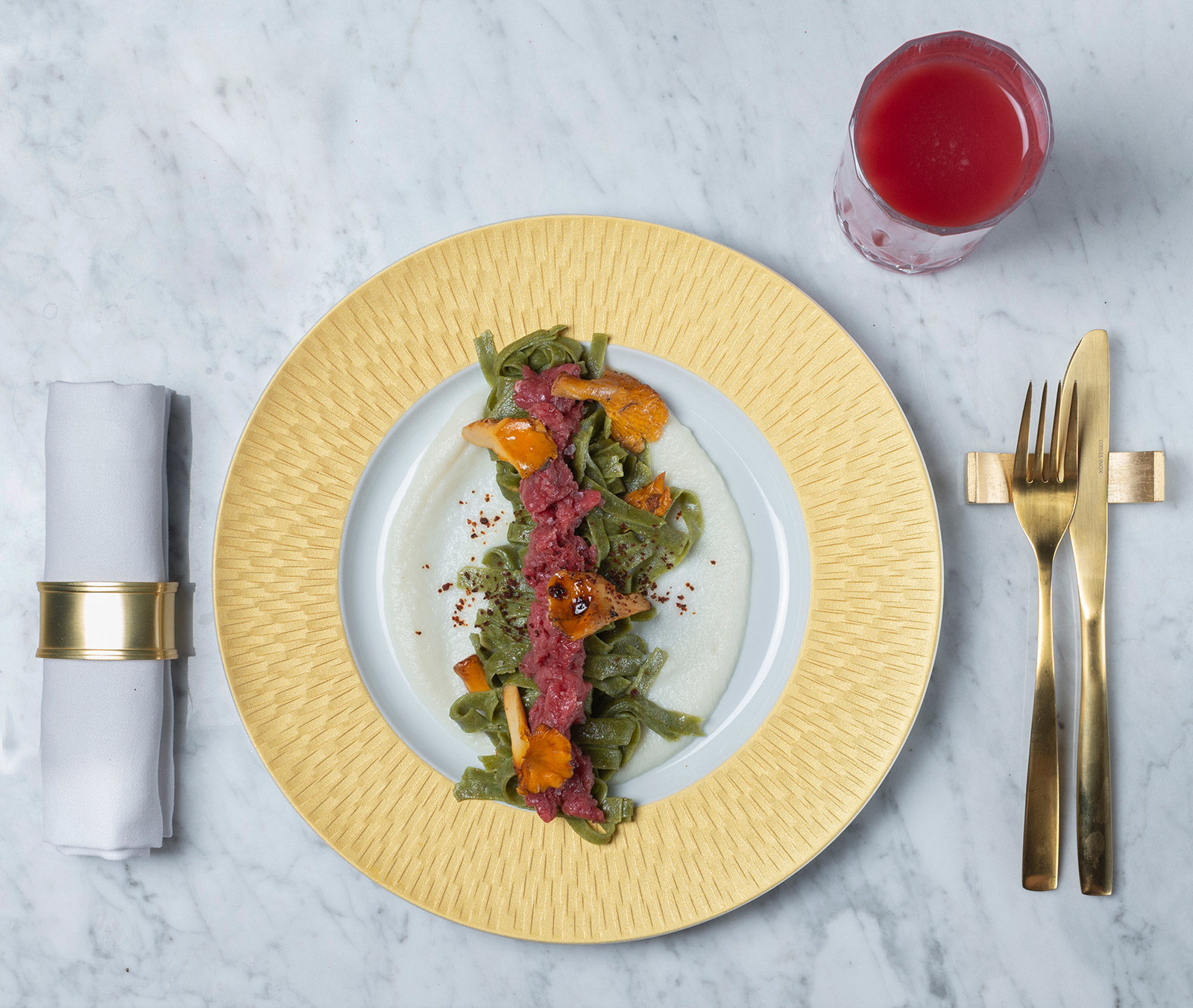 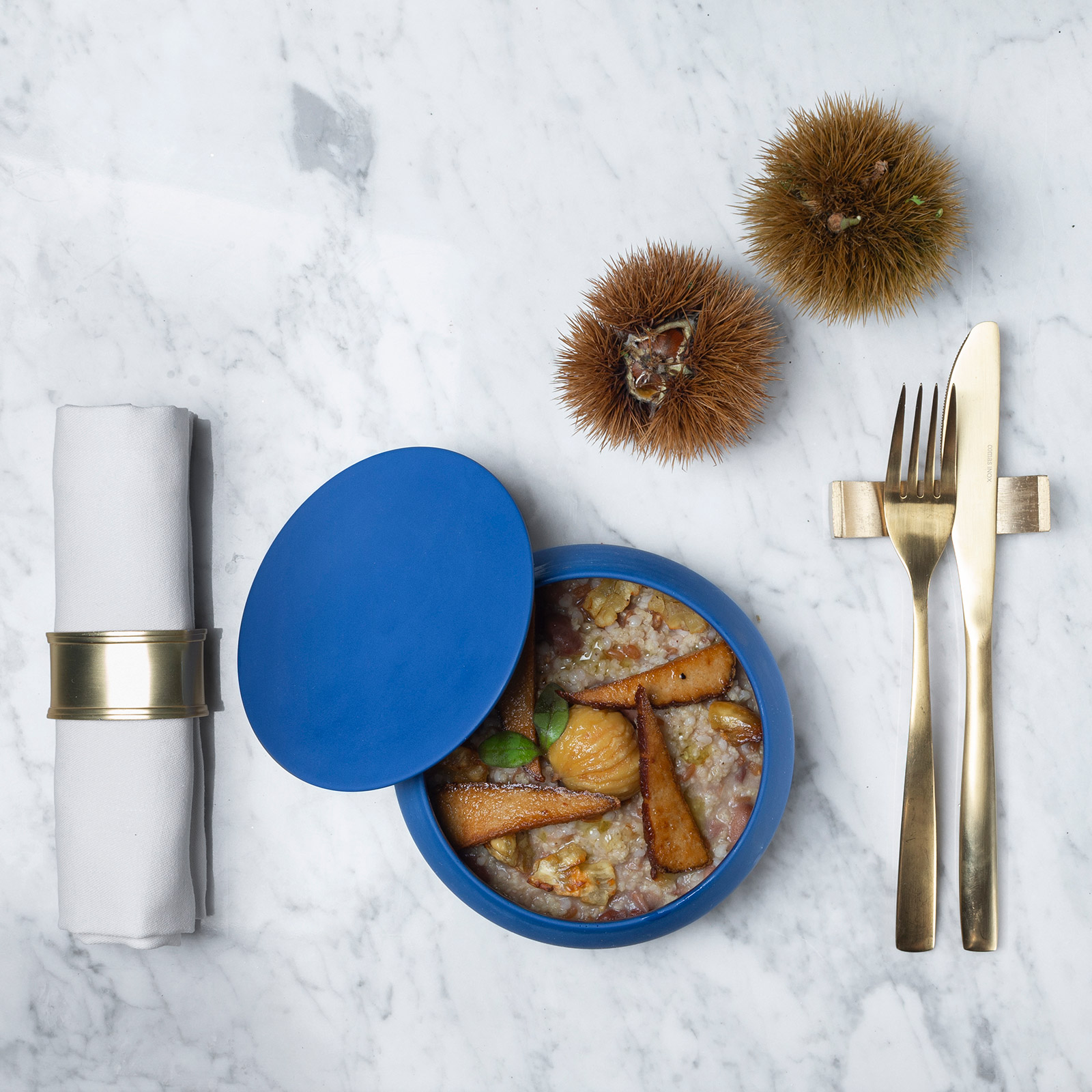 With ingredients such as blueberries, berries, seeds, algae, black cabbage, black beans, as well as salmon, broccoli, beetroot and oats, Di Martino fills the “veli”, Plato’s patented icon, thin dough rounds made of teff and moringa flours with no yeast, in both sweet and savoury versions; there are also “cones of crudités à porter”, a concentrate of fresh fruits and vegetables to be savoured raw, accompanied with sauces made with lemon, aromatic herbs, yogurt and spices. There are soups, such as the grain and bean soup with roast chestnuts, and one-course meals such as the “Purple teff-flour gnocchi, steamed codfish, alfalfa sprouts and parsley chlorophyll”. The menu is sensitive to the requirements of vegetarians and vegans.

The drinks, for example, include scented waters, also patented by Plato and made with natural ingredients typical of the Mediterranean, such as lemon and lime peel, spices such as starred anise and cinnamon, fruit and vegetables. Delicious for hydration and depuration at any time of day, they contain no added sugars, alcohol or caffeine. There are also fruit and vegetable juices (varying from season to season), freshly juiced, a real concentrate of vitamins, minerals, enzymes, colours and flavours, that are neither lost or altered during the juicing process.

Our purpose is to offer a cool and innovative gastronomic response, that provides well-being on three levels: the mind, the body and the spirit

And while the dishes are superfoods, the space is deliberately chic (hence the full name of the restaurant) because, as the owner explains, the “Plato Chic Superfood” experience must also be aesthetically gratifying: the seduction of the place, in other words, goes hand in hand with the energy channelled by the colours and composition of the dishes. 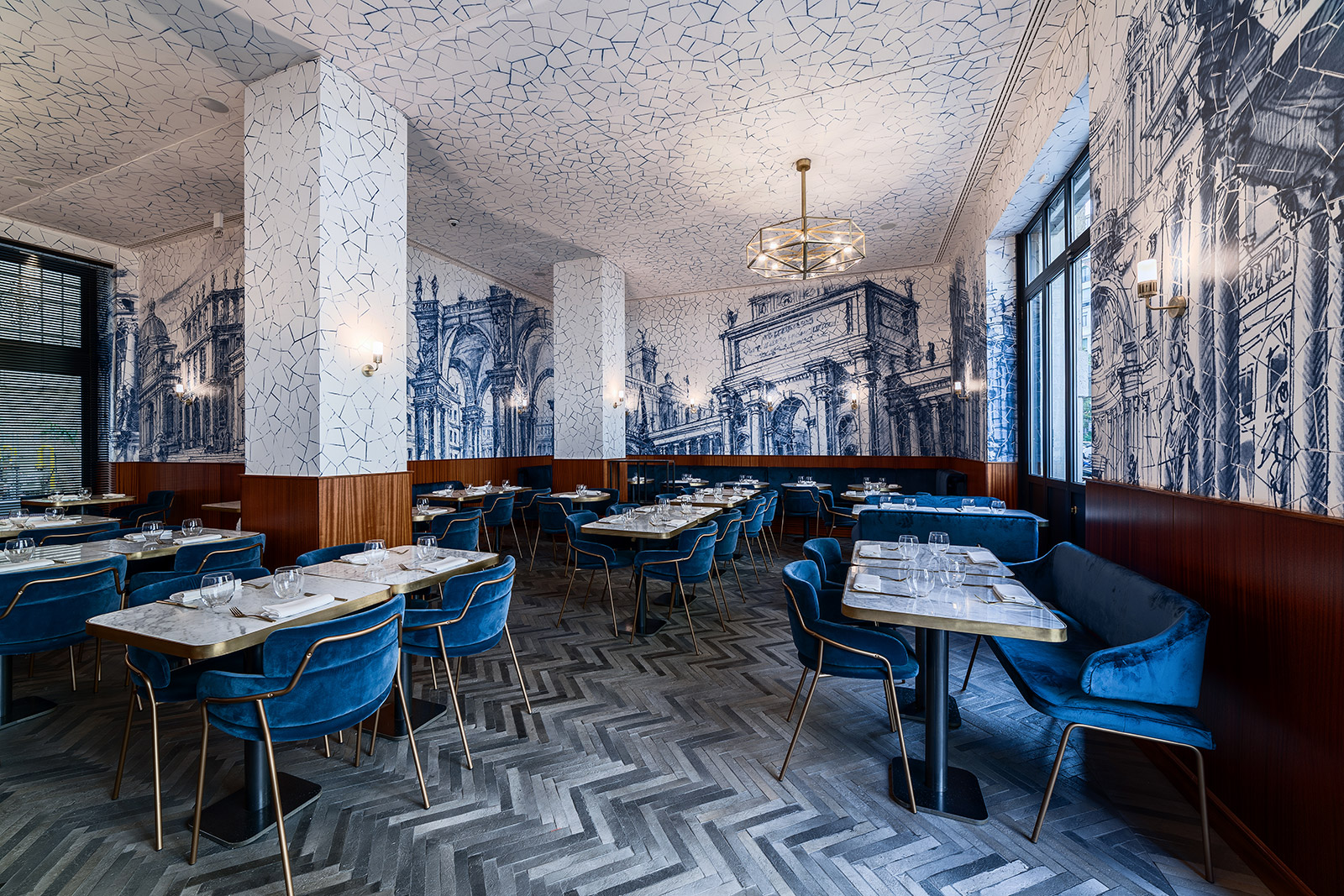 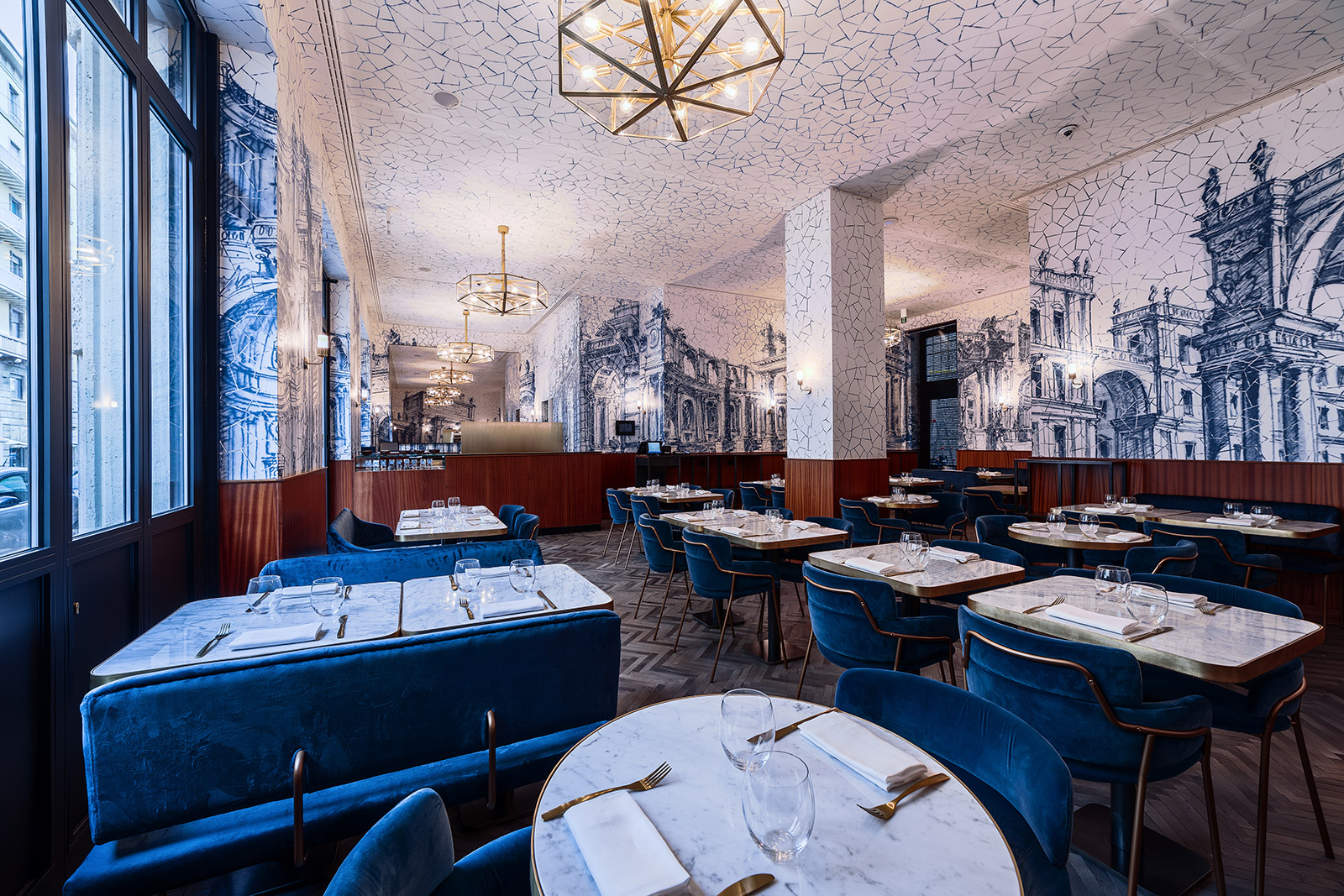 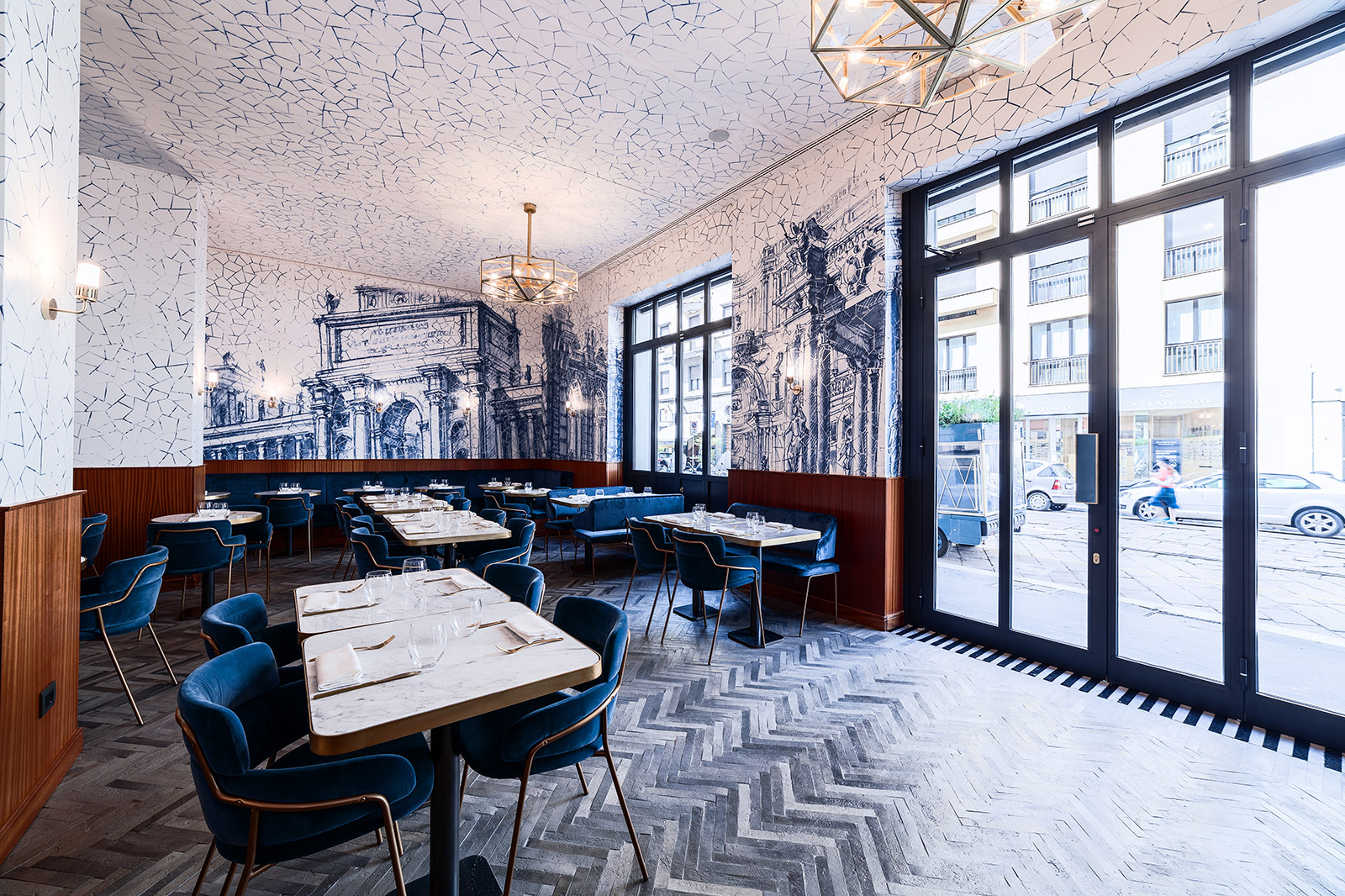 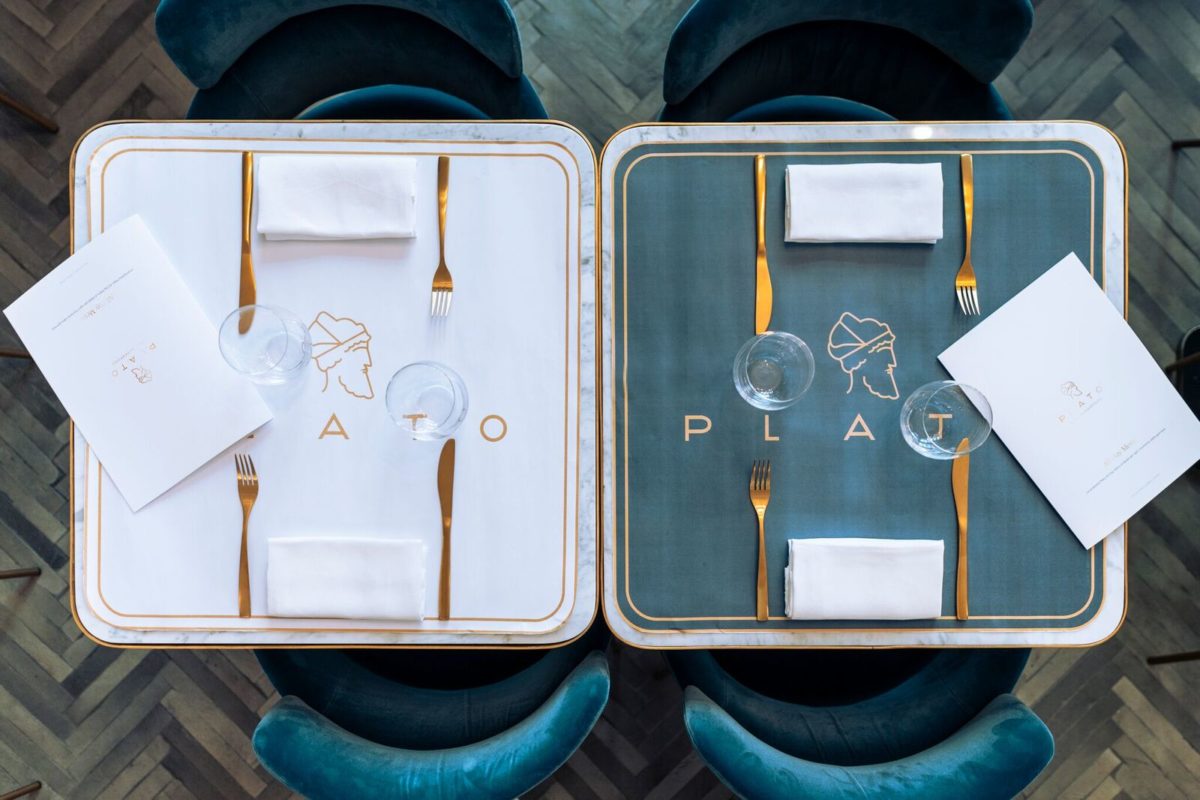 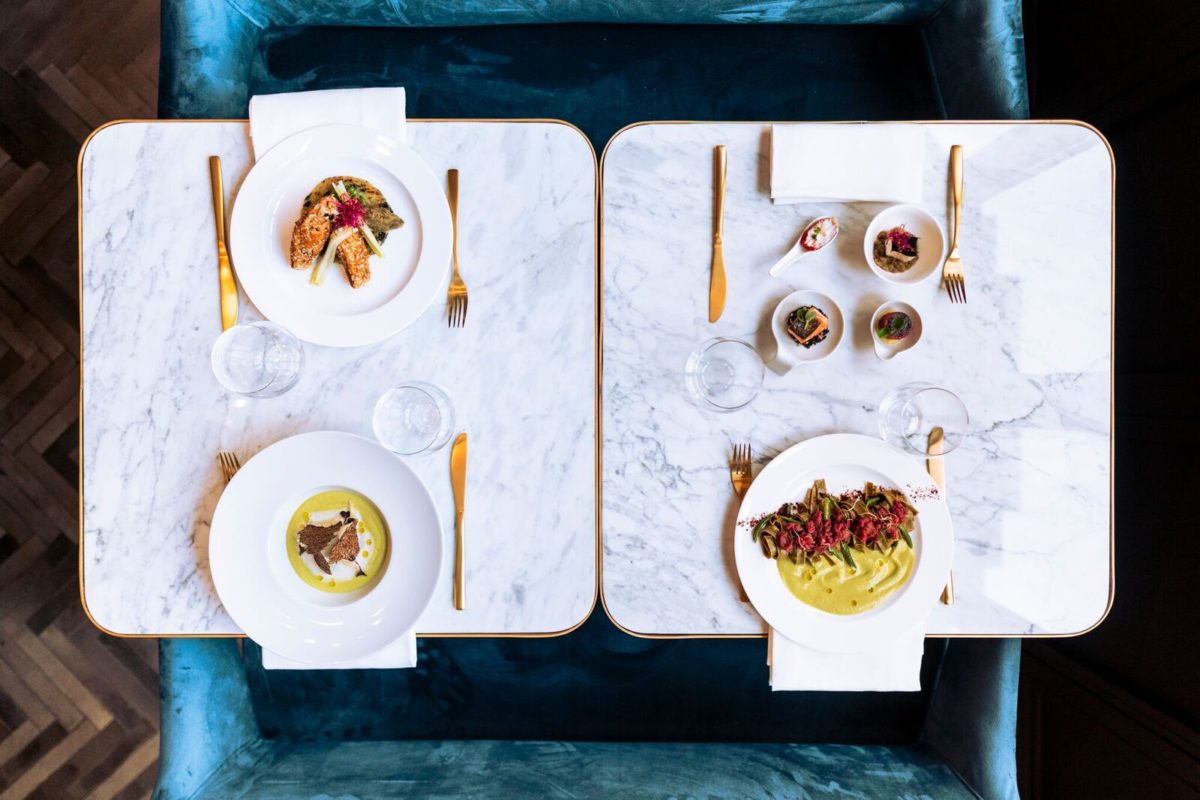 The interior design project by CLS architects (based in Milan and New York) begins with an elegant colour that defines the brand, blue, to describe a scenario that rises to the level of the cuisine. Encircled by a “mantle” of walls decorated with views by Piranesi, the space is rich in atmosphere and references, without ever being over the top. The “dance” of classical architectural works covers all the surfaces, the comfortable chairs with a vintage design echo the colour of the walls, the floor is paved in black Etruscan terracotta tiles made by hand and laid in a herringbone pattern, the table tops are made of marble, and the wood of the boiserie is stained dark.

The “street” version of the restaurant. © Plato Chic Superfood

Plato is also street food, always on the move: an ecological electric vehicle moves constantly throughout the heart of Milan, taking the dynamics of street food in a “chic” and “super” version out the restaurant doors, and enabling the vision of its creator.