The geopolitical review Limes brings the cartography of facts and events to the Ducal Palace, to rethink Italy’s role in the world

«Parochialism makes people more short-sighted, whereas it is essential to lift your head from the table and broaden your horizons». Laura Canali, the cartographer for the Italian geo-political review Limes, and curator of the exhibition “L’Italia tutta intera”, Italy “as a whole”, explains the philosophy underlying the exhibition at the Ducal Palace in Genoa (8-10 March 2019), based on the awareness that fragmentation is the «result of political marketing».

Italy – as a whole – has just one history, made of many stories

«I realized this while designing the cover of the magazine. I was used to the idea of Italian fragmentation, and so I was amazed by this plurality of histories and cultures that make up a common history, deriving from the desire for unity that drove us in the past», explains the cartographer. She explains the principle further by talking about Genoa and Venice, which are on display in the exhibition with two maps that represent them in the age of the Maritime Republics: two republics we would now define as the “greatest”, come in conflict with one another, and the antagonism would lead them to destruction.

For this reason, the opening image is a map-mural (photo below) that portrays Italy within its Euro-Mediterranean context as it leans towards the Ocean, first and foremost towards the United States. This is a strategy involving the nation’s role in the world, which Italy can only play by strategically relying on the union of its eclectic characteristics. 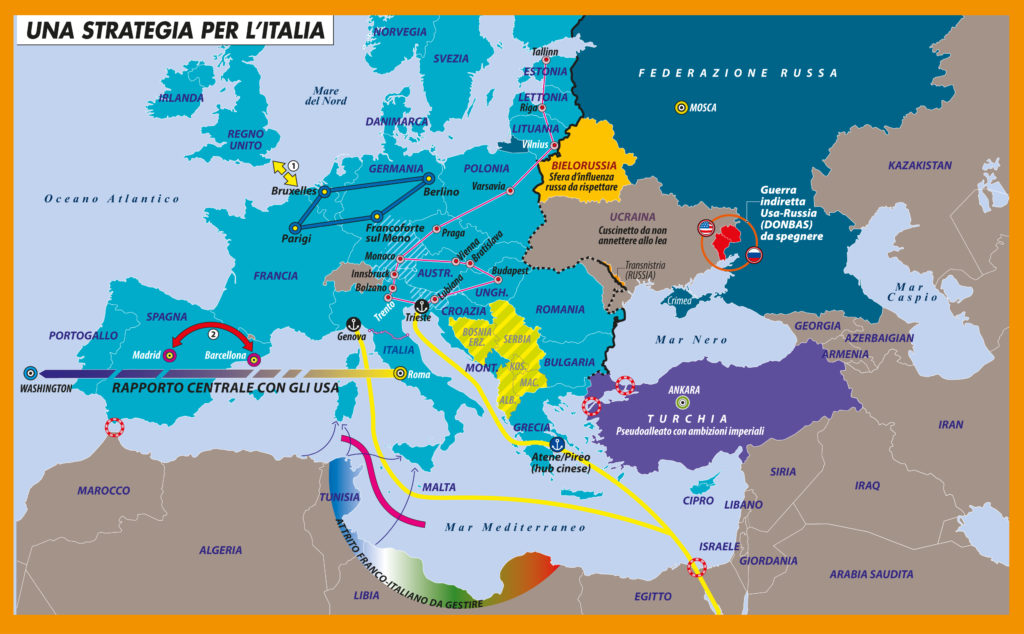 Laura Canali talks about the project for the exhibition, composed of 12 large-format maps (though not greatly detailed), showcasing the idea that underpinned the design of the maps and constantly moving between the difficulties of the present day and the lessons to be learned from the past. In an instant, we go from the seafaring republics to the new silk roads (that today reach all the way to Lyon) and to how important it is for Genoa to intercept the trading links that once made it great: today’s High Speed Railways like yesterday’s Via Francigena?

The project to revitalize the ports of Trieste and Ravenna is sustained by the possibility of counting on infrastructure, on connections with Eastern Europe and thus with the port of Piraeus and China; the story becomes something of a “pretext” to examine «our business relations with China (the case of Huawei teaches a lesson) and, explains Canali, to insert them into the regional context to understand the importance of the State in and of itself and the environment that surrounds it». The citizens, first and foremost.

During the three days of public encounters with Italian and international experts in geo-politics, economics, society, strategy, energy and demographics organized by Limes in Genoa, L’Italia tutta intera is «the image we need to start from to reconnect to the rest of the world», as the poster for the event points out. And as Laura Canali herself will explain during the four guided tours to be held Saturday (11:30 am – 5 pm) and Sunday (11:30 am – 5:30 pm) and during the opening on Friday at 5:30 pm. There will also be an encounter, dedicated to the students of the Liceo D’Oria, to talk about how a geo-political review is made. «We have maps on our phones, in our hands, but young people don’t know geography: this is a tragedy because this tool becomes just another element of short-sightedness». We look for directions to the next street over, the next neighbourhood over, and we lose the overall picture. For those who cannot come to Genoa, the Festival will be broadcast in streaming and on social media.