A restored former textile warehouse hosts a space where different ideas and atmospheres coexist, designed down to the smallest detail

Milan, suspended four meters from the ground. We are in “Moebius”, a restaurant in the Corso Buenos Aires area where haute cuisine goes hand in hand with the finest design. A place that stems from the synergy between Lorenzo Querci, a young entrepreneur originally from Tuscany with a family tradition in the restaurant business, Enrico Croatti, a chef with international experience and two Michelin stars, and Q-bic, an architectural firm asked to conceive spaces that could involve clients in a unique adventure of the senses.

The space was originally a former textile warehouse which has now been restored in a post-industrial style, over a surface of 700 square meters, 12 meters high. Moebius is both a deli-wine bar, a tapas bistrot, a cocktail bar, and a vinyl record store with a space for live music. It’s a place that greets you as you walk in and seduces you in a thousand way, making you want to spend the entire day there just to read or study. Basically, it is one of those where the atmosphere is so dense with emotions that it inspires you, and induces you to consider it as a preferred place of choice. «The intention was to create a contemporary space, architecturally clean and rigorous, which dialogues with a warmer and more romantic style of interior design conceived to make the customer feel at ease, inviting him to stay at any moment of the day», say Luca and Marco Baldini of Q-bic. 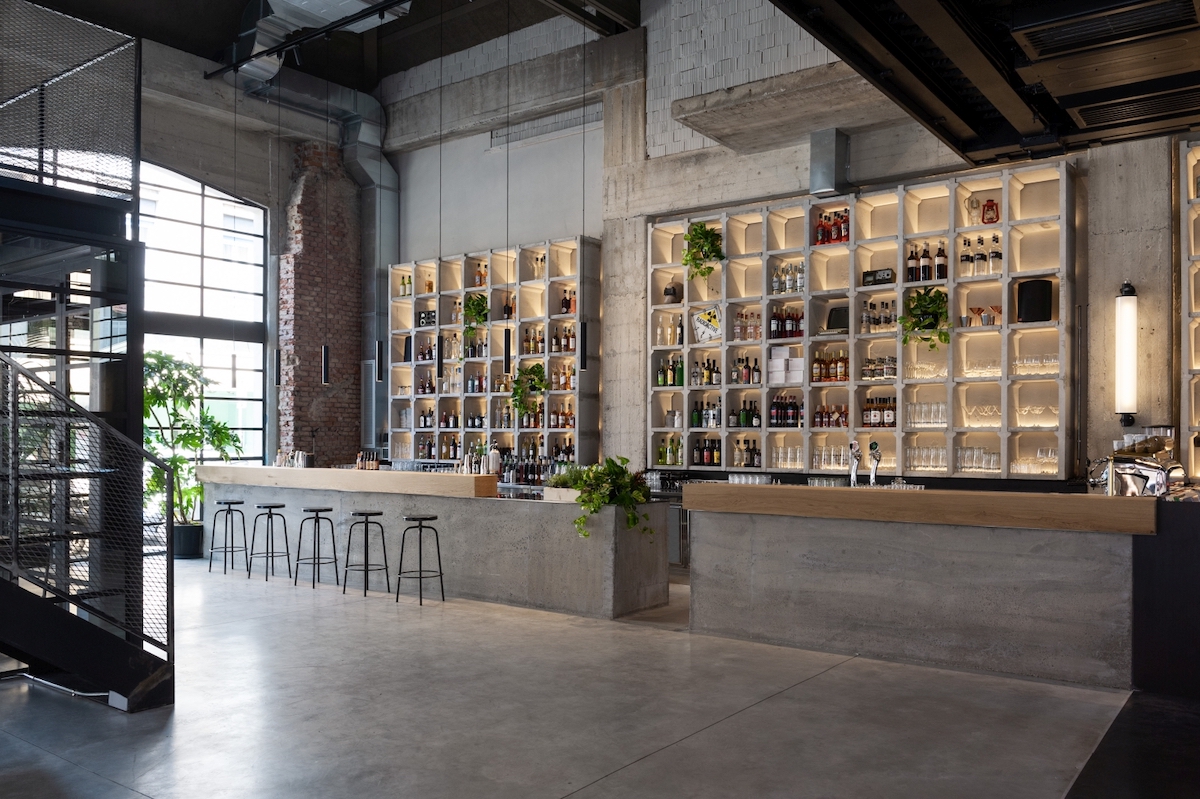 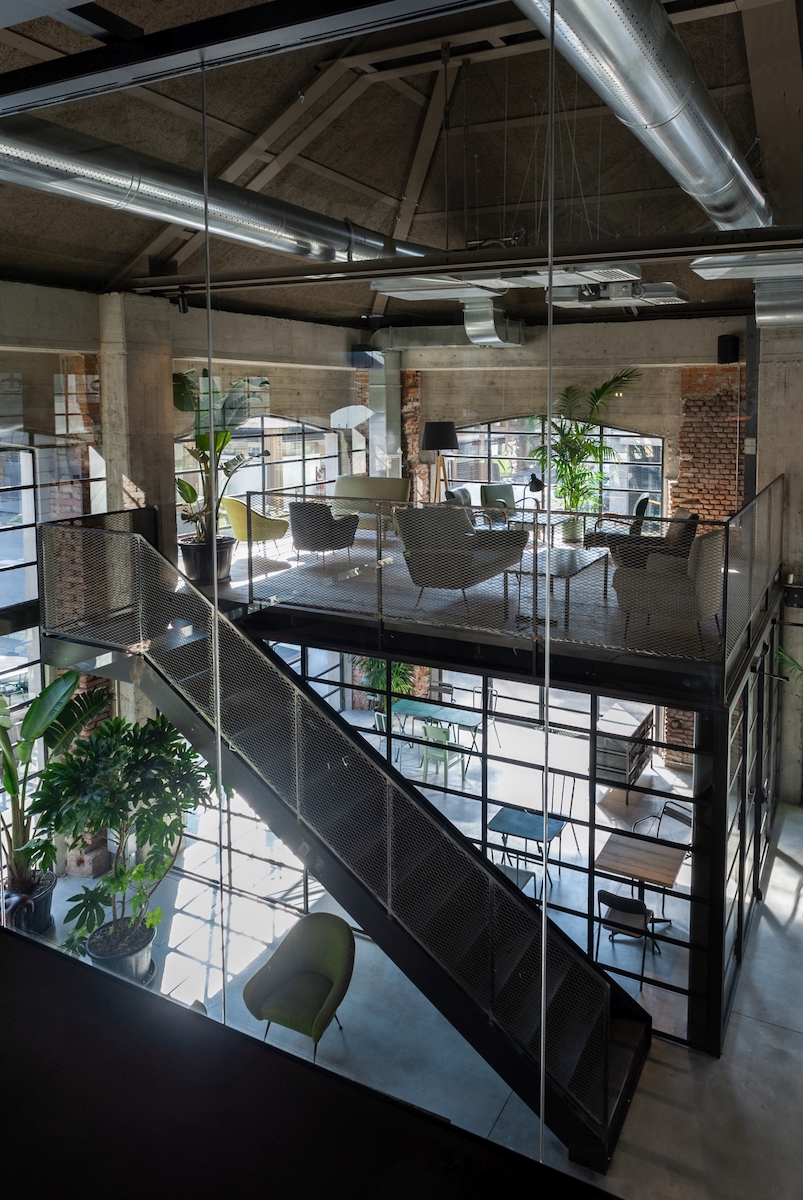 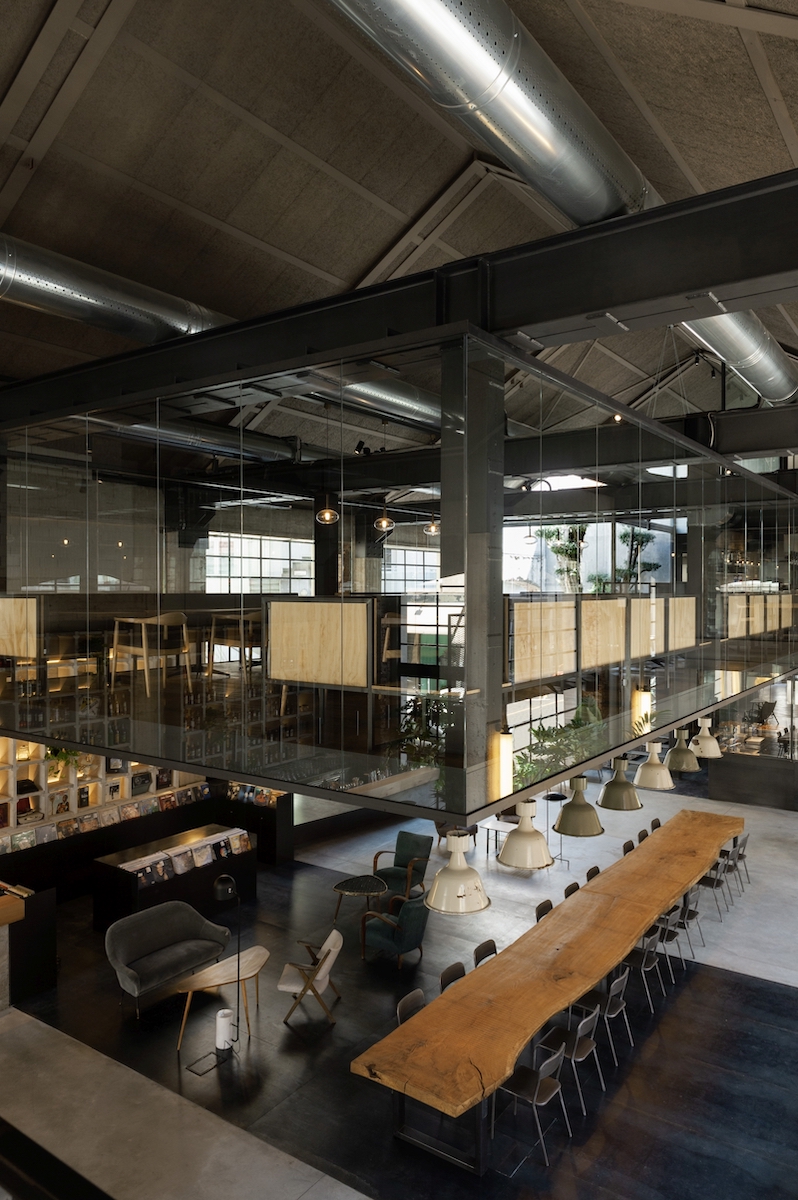 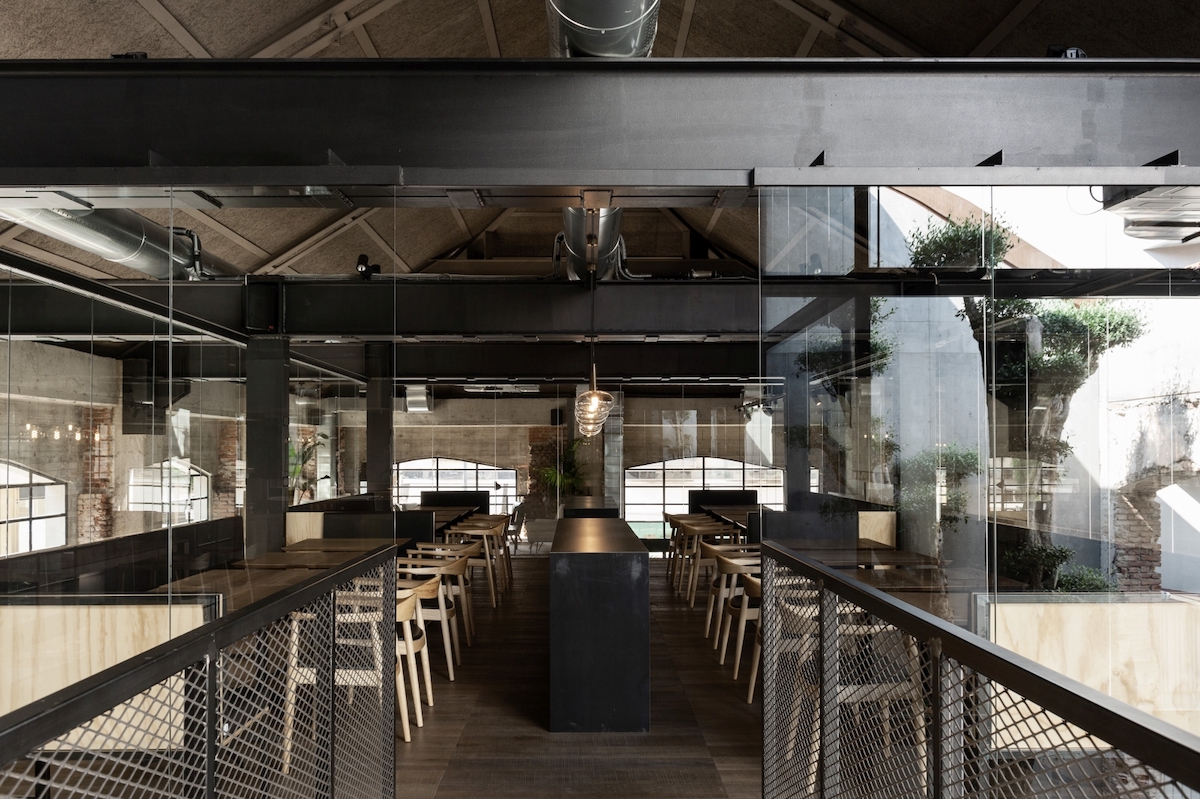 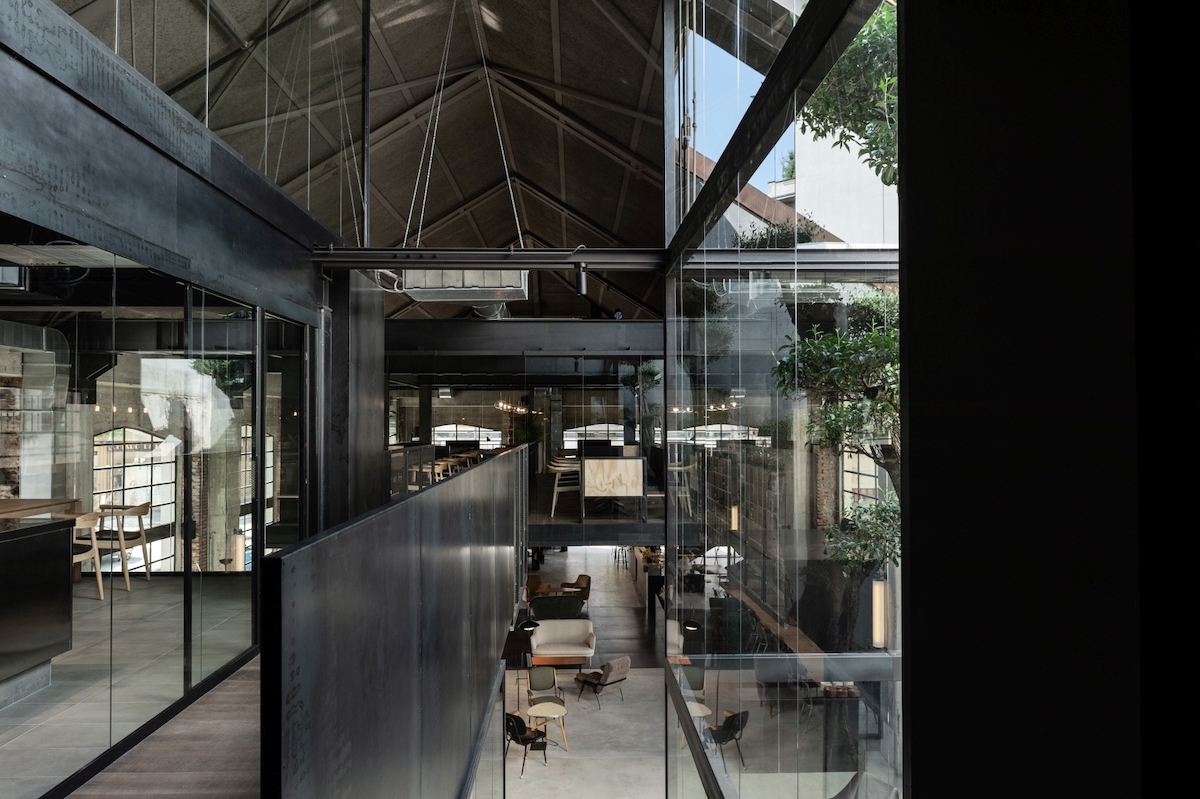 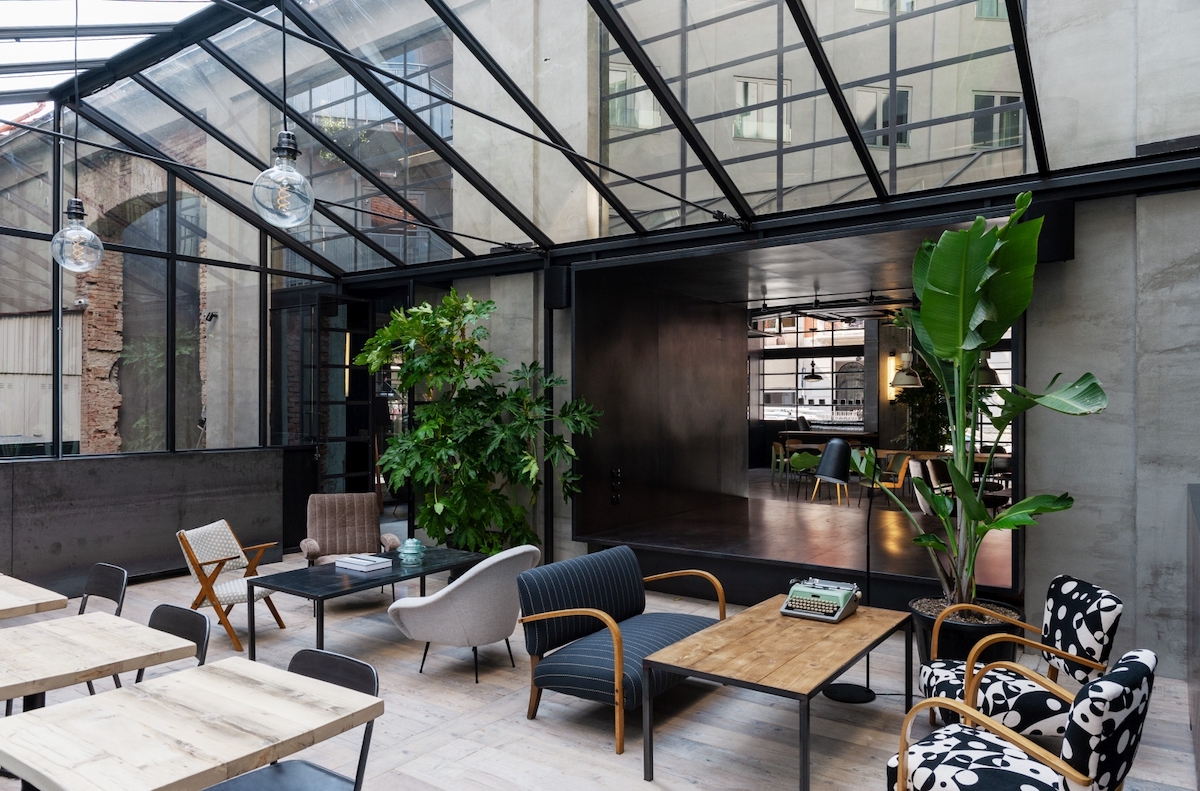 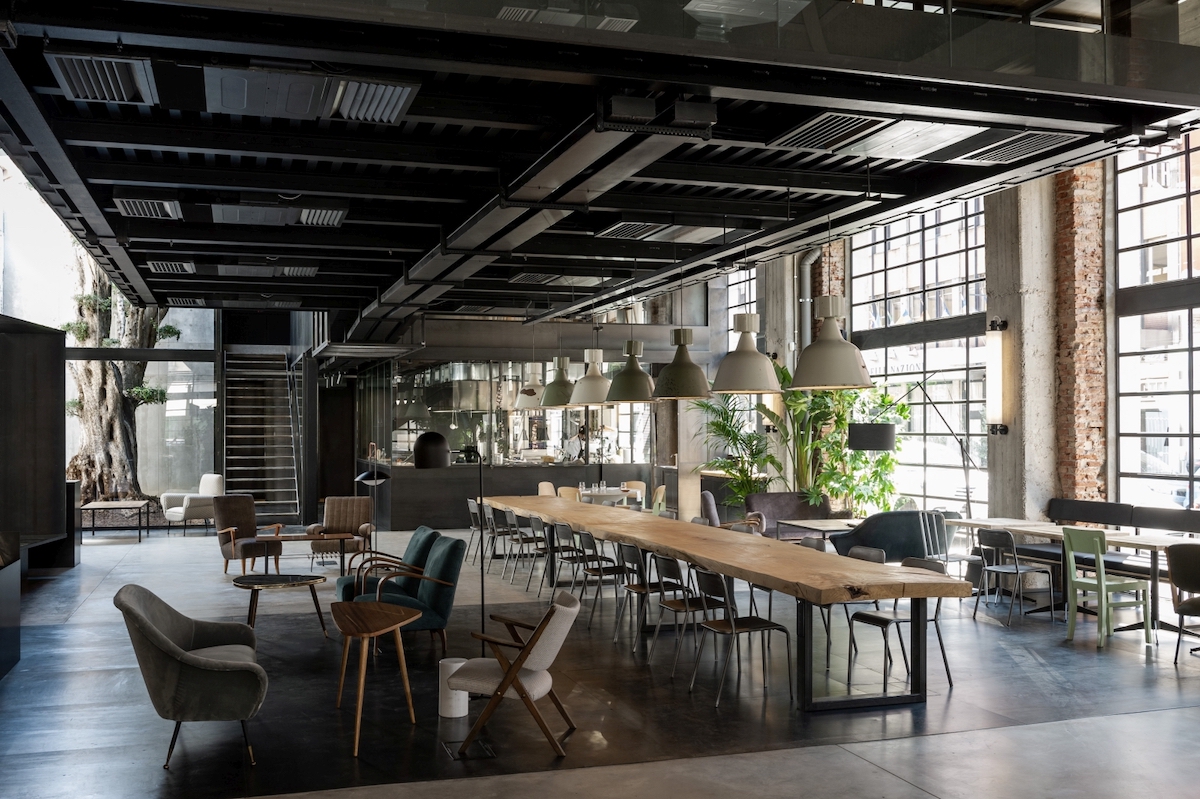 On the ground floor are the tapas bistrot and the cocktail bar. This is where you can find meals based on the Spanish, French and American culinary tradition, along with drinks proposed by Marco Siclari. The protagonist of the setting is a very long wood table, an invitation to conviviality and sharing. To each side, there are more intimate areas with comfortable armchairs or bars that look out towards the city through the ample glass windows of the former warehouse. «We tried to maintain the industrial appeal of the building, explain the designers. The main challenge was to fill a space this large and empty in a balanced way, creating intimate, private spaces».

The most important and commanding piece is without a doubt the suspended platform at the centre of the room. Surrounded by glass walls, it looks like a 60 square-meter aquarium suspended over the void.

Like a cloud, the platform hosts the deli-wine bar that may be reached via a steel staircase, painted black. This is where the more elaborate and experimental meals are served. The experience of dining suspended above ground thus comes to Italy. To name just one case, we might mention the EnjoySky project, presented last year by the young entrepreneur Nicola Maffessoli from Brescia, who arranged for a group of courageous gourmets to dine outdoors on a platform suspended 50 metres above ground over the vineyards of Franciacorta. Here too, creative cuisine and famous chefs. 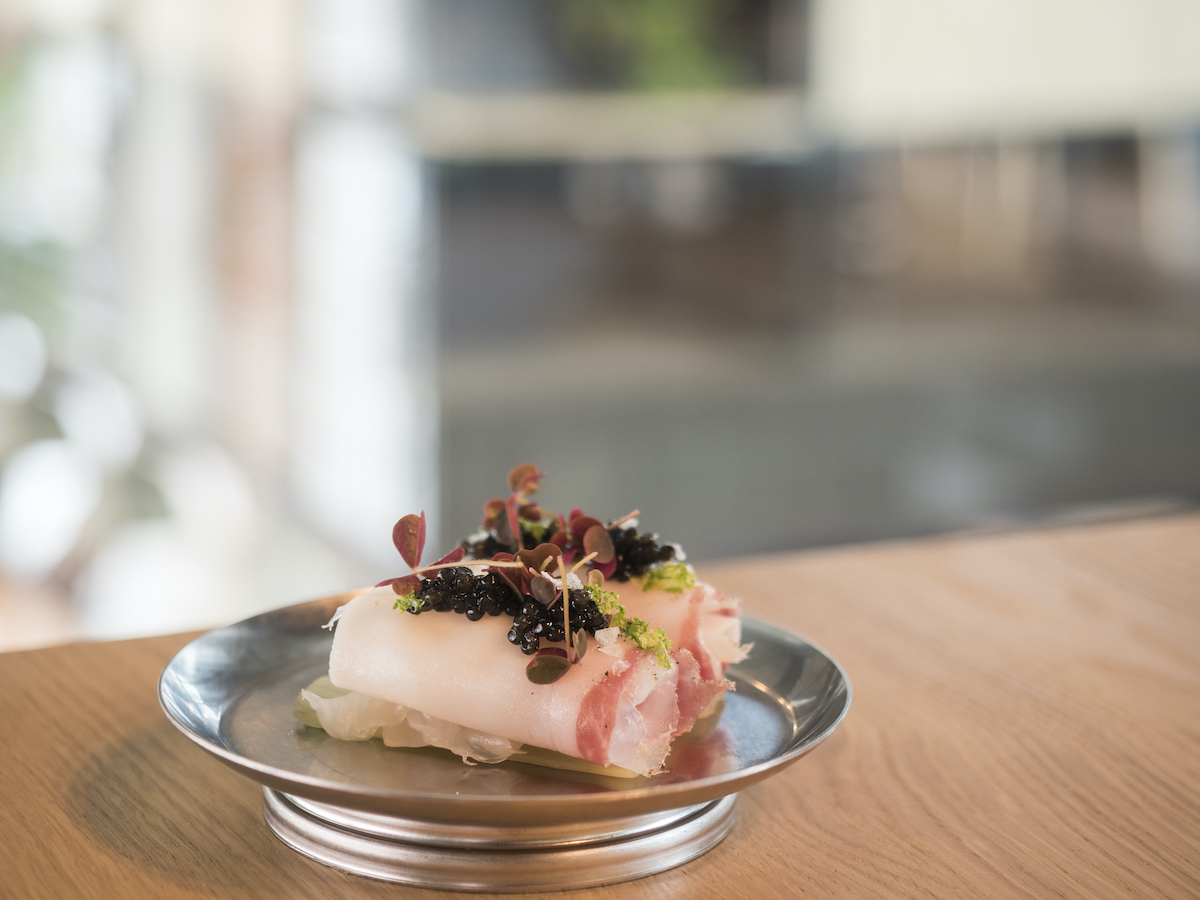 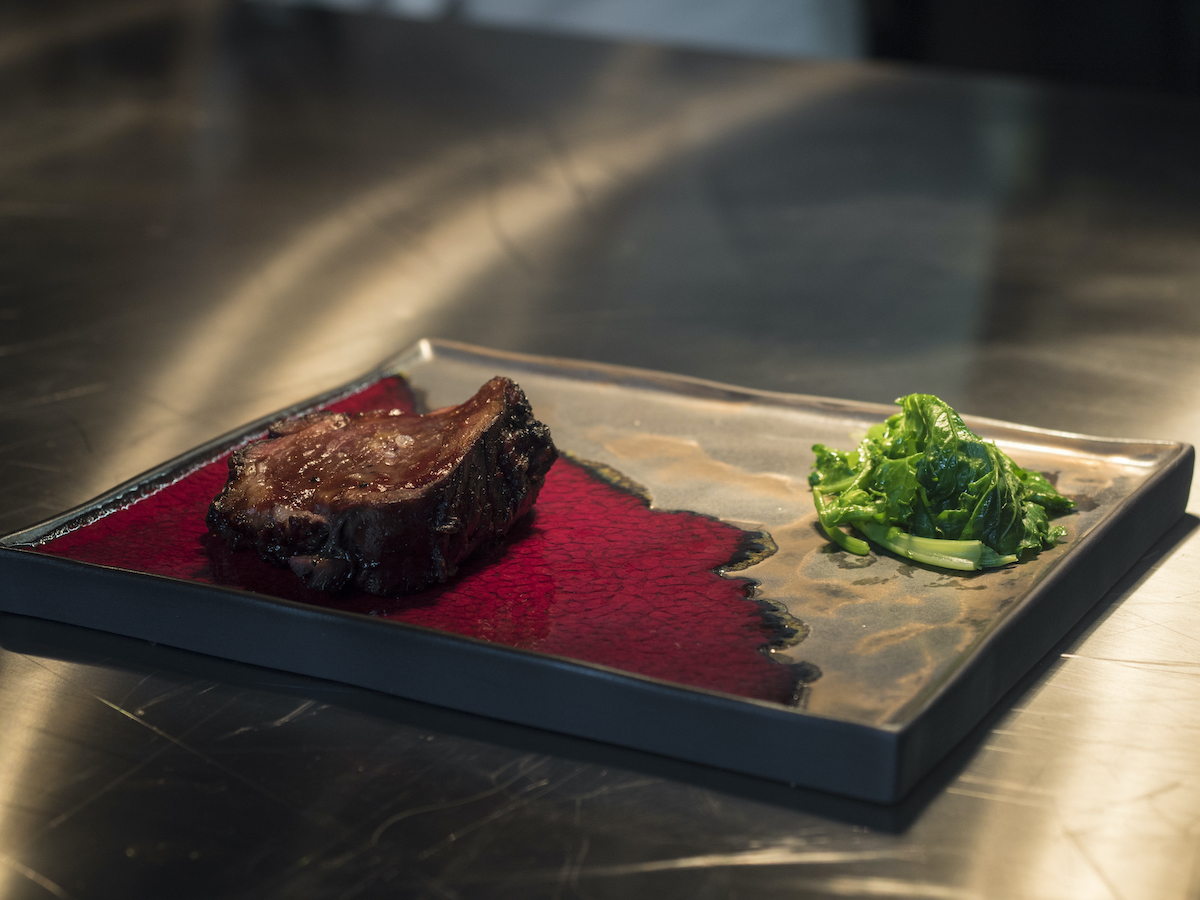 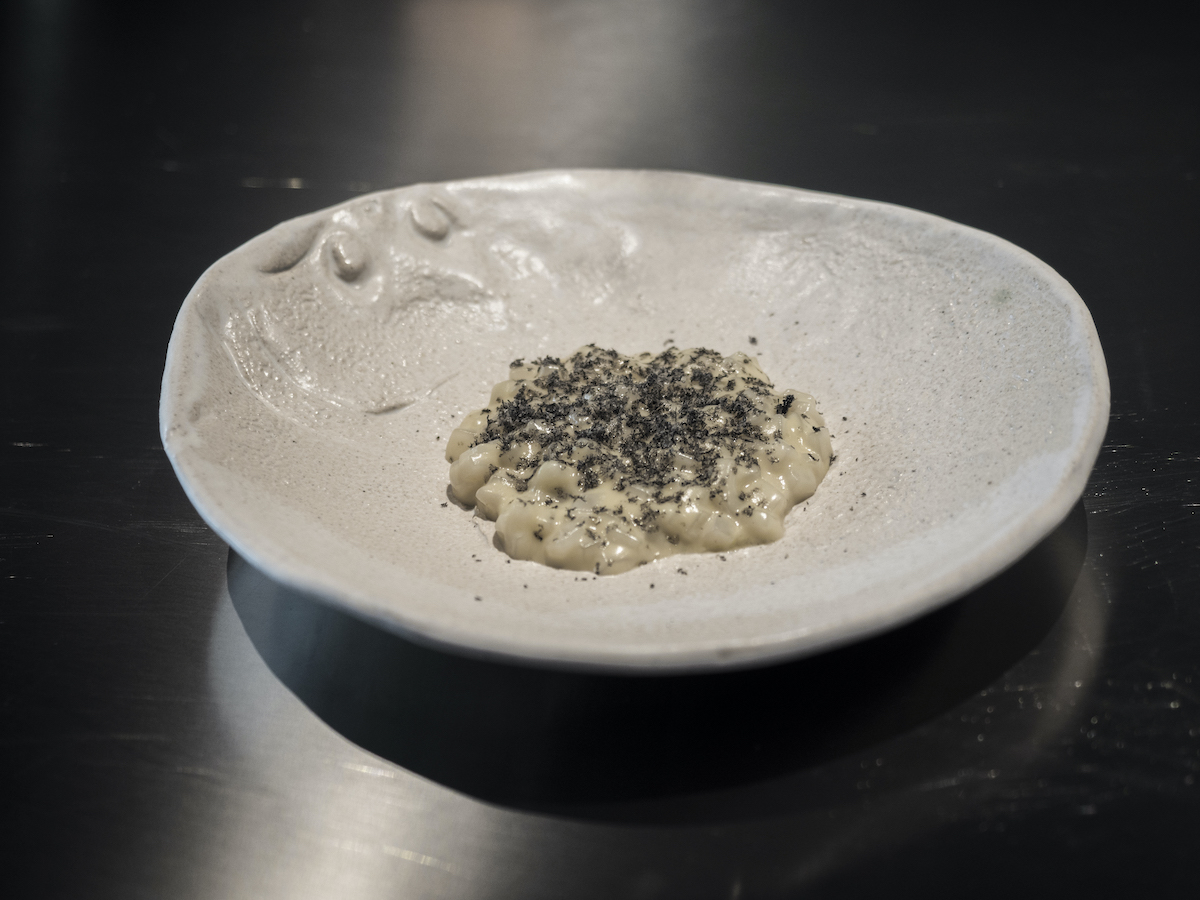 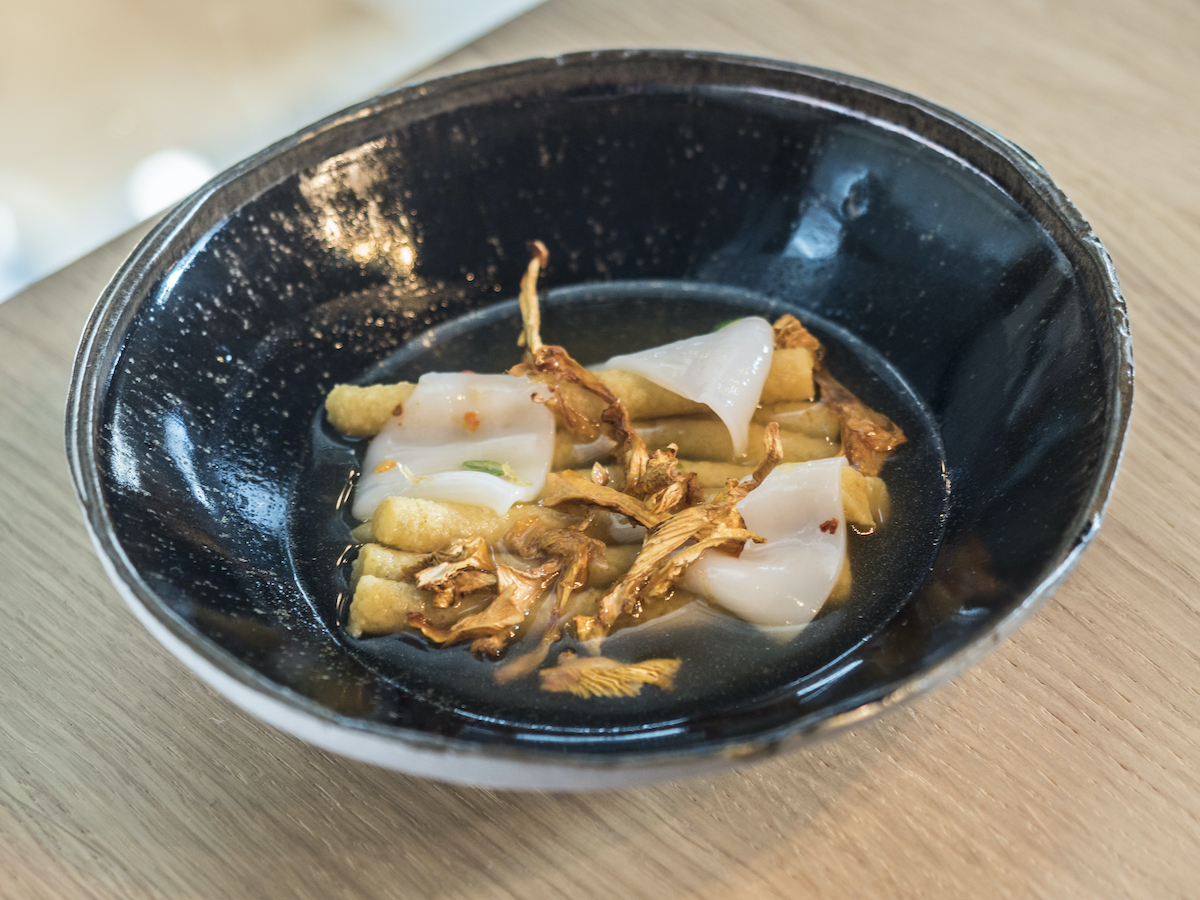 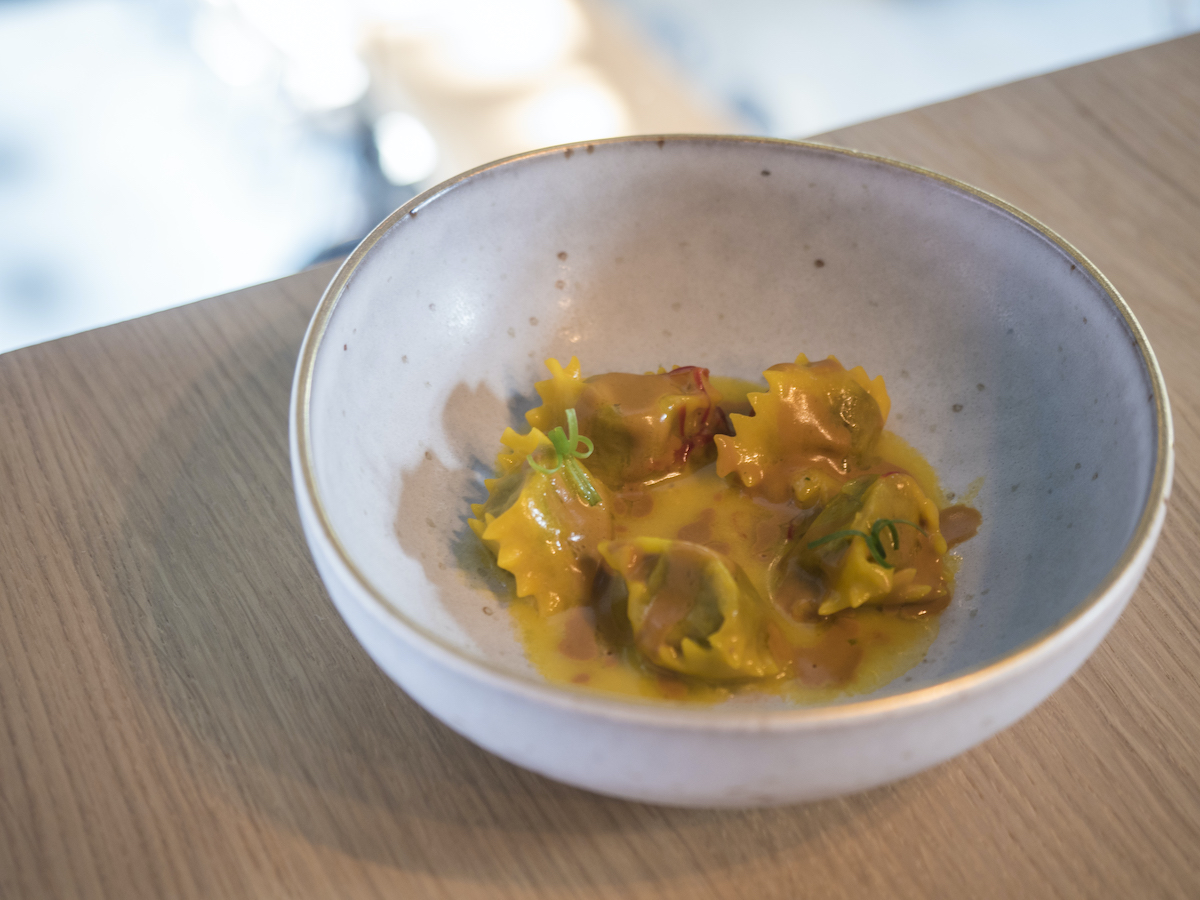 Moebius, the name of which is inspired by the nom-de-plume of French cartoon artist Jean Giraud, owes its menu to Enrico Croatti (born in 1982), a chef who has “attracted stars” in Italy and abroad. He has worked in the United States at the “Angelini Osteria” in Los Angeles, in Spain at the “Akelarre” with Pedro Subijana (three Michelin stars) in San Sebastian, in France at “Les Terrasses de Lyon” at the Villa Florentine and at the “Auberge du Pont de Collonges” with Paul Bocuse, then in Italy at the “Grand Hotel Miramonti Majestic” in Cortina d’Ampezzo, at the “Dolomieu” in Madonna del Campiglio (where he got his first star), and at the “Orobianco” in Alicante (his second Michelin star).

A long list that explains the value of a chef who is capable of true culinary miracles.

«For the Moebius, I decided to propose a new concept of cuisine, returning to my origins in the Romagna region, and so to the idea of an “osteria”, but a contemporary gourmet version» explains Croatti. The menu for the ‘osteria gastronomica’ includes dishes such as rump of roe deer with mountain lard and wasabi-flavoured tart pears, truffles and cabbage,cabbage, ossobuco with saffron and sea urchin,, rilled breast of squab with caramelized Chinese tangerines. 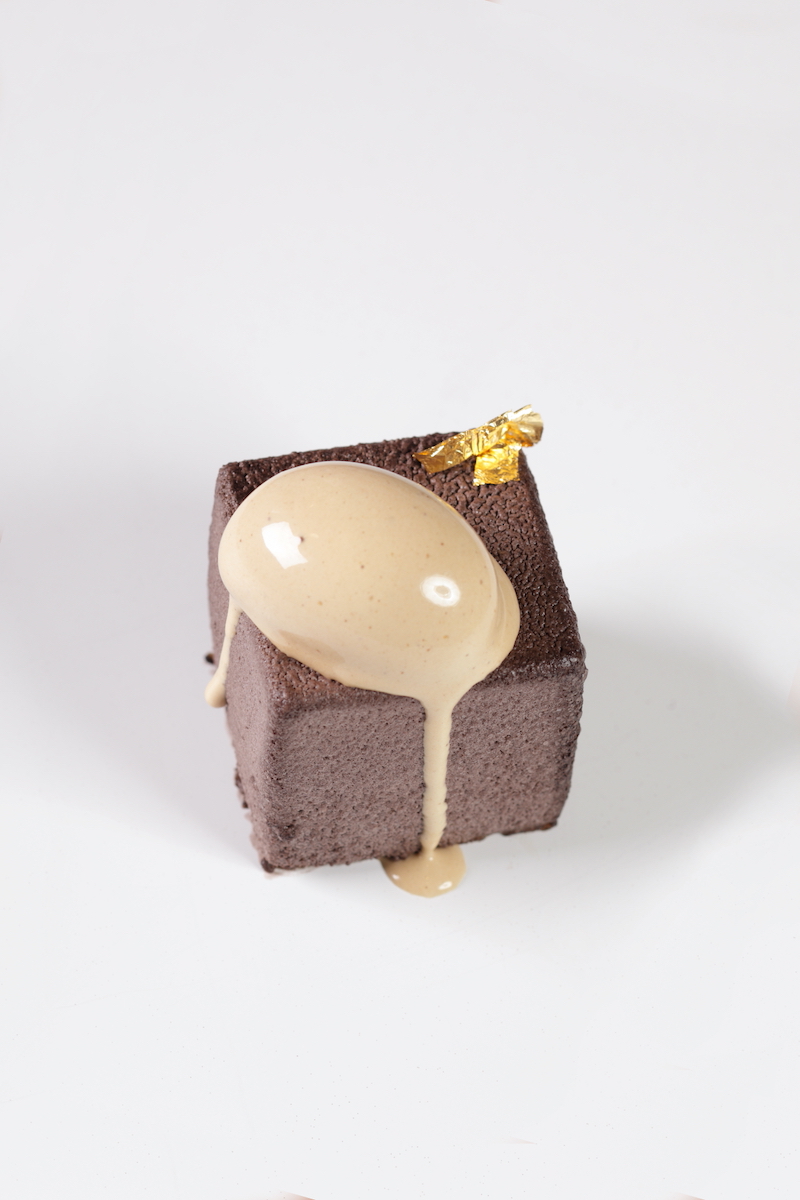 For anyone interested in a less complex aperitif or after-dinner drink, the cocktail bar alternates between creative new drinks and the great classics. The tapa bistrot offers different dishes based on the time of day: at lunch one can choose from vegetarian and vegan options, such as fregola with chickpea and clam gazpacho or the spaghetti with tomatoes alla caprese with burrata and herbs, and desserts such as the bouquet of red fruits and chocolate. The afternoon is the moment for gourmet toasted sandwiches and cakes, and in the evening, the tapas are the stars. They include the croquette of squid in black ink, anchovies and thyme and mussels in non-filtered beer. And then there are “dishes between tradition and modernity” such as free-range pork, agnolotti with ossobuco, red tuna Japanese-style with maracuja and yogurt purée. So many diversified proposals in a single space, complete with one dish that demonstrates the chef’s strong ties to his own roots: Mamma Franca’s tiramisu! !