In the few months since it opened, the IYO Aalto restaurant has already won the Food&Wine Italia Award 2020, a prize promoted by Food&Wine Italia – the Italian edition of the American magazine – to highlight excellence in the fields of food, wine, mixology and interior design.
Located in Milan, in the square dedicated to Alvar Aalto on the first floor of Torre Solaria, IYO Aalto «(…) is a project in which authentic collaboration and the meaningful dialogue between the owner and the designer of the restaurant rely on a combination of aesthetics and message to interpret the essence of their proposal in the best possible way», stated the jury.

This was quite a satisfaction for Claudio Liu, the owner of the restaurant, and Maurizio Lai, the architect commissioned to evoke the suggestions of the Rising Sun in a contemporary style.

Born in China, the young owner of IYO Aalto came to Italy at an early age and spent his childhood there. At the age of 18 he decided to work with his father at the Ristorante Acquario in Milan. There he fell in love with the cuisine of his native country, and in 2007 at the age of 24, he decided to open IYO Taste Experience, the first Japanese restaurant to win a Michelin star in Italy. The ace up his sleeve lies in the triad “commitment, passion, determination”, thanks to which the business went very well, so well indeed that at the end of 2019 he opened IYO Aalto, his second banner in the heart of Porta Nuova. 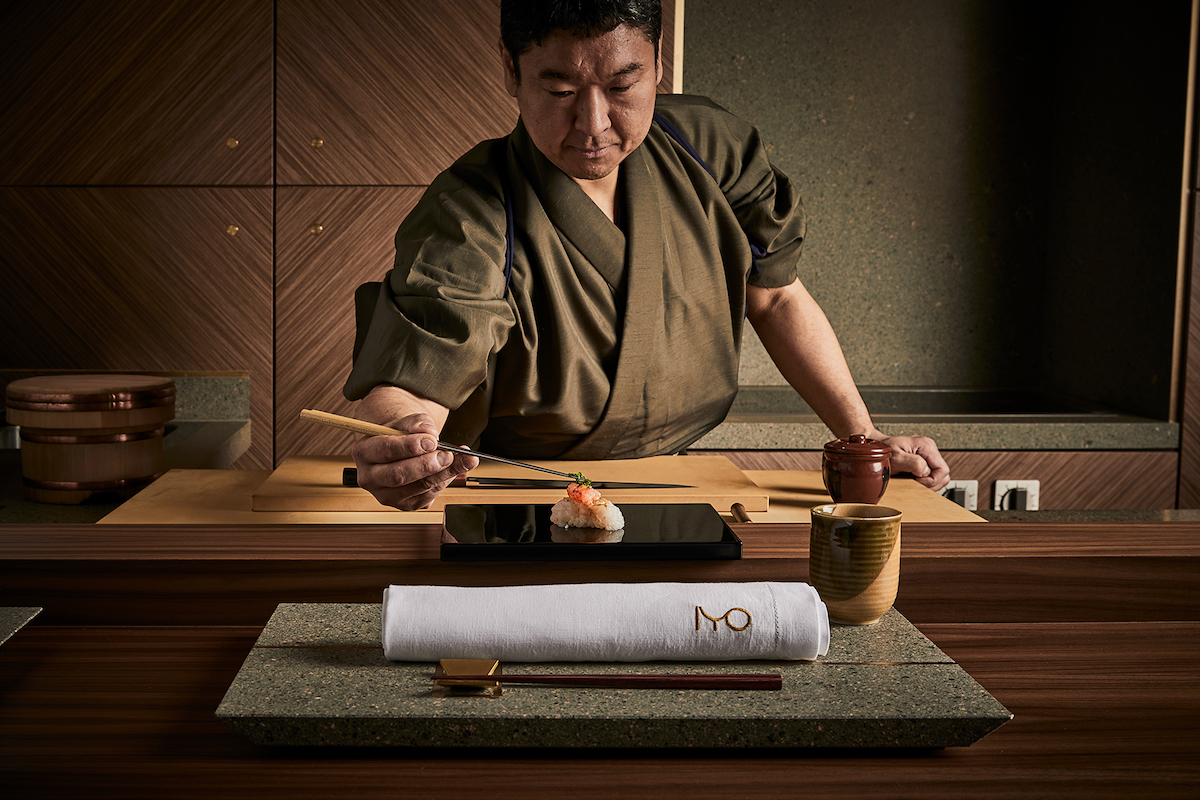 Two opportunities : the sushi bar and the gourmet restaurant. Overseeing the first kitchen is Japanese chef Masashi Suzuki. His early experiences are tied to his native country, where during the day he served as a kitchen boy and observed the expertise of the great sushi masters, while in the evening he mimicked the same gestures with fish that he bought at the market. In 2001 he came to Milan, where he worked in the finest Japanese restaurants until, in 2018, he went to work for Claudio Liu. Today he is the sushi master for IYO Aalto and supervisor of the sushi bar at IYO Taste Experience.

The IYO Aalto sushi bar is a place that faithfully reproduces, for the intimate few, the spirit of the Japanese edomae zushi tradition, a series of rituals that delves its roots in the early nineteenth century. The nigiri are prepared in front of the guest and served one at a time. This is a process that alternates sushi prepared at the moment with steamed or grilled dishes. At the sushi bar, Masashi works with Luciano Yamashita, also a sushi master, and Miwa Saito, who assists and accompanies the guest through every moment of the edomae experience. 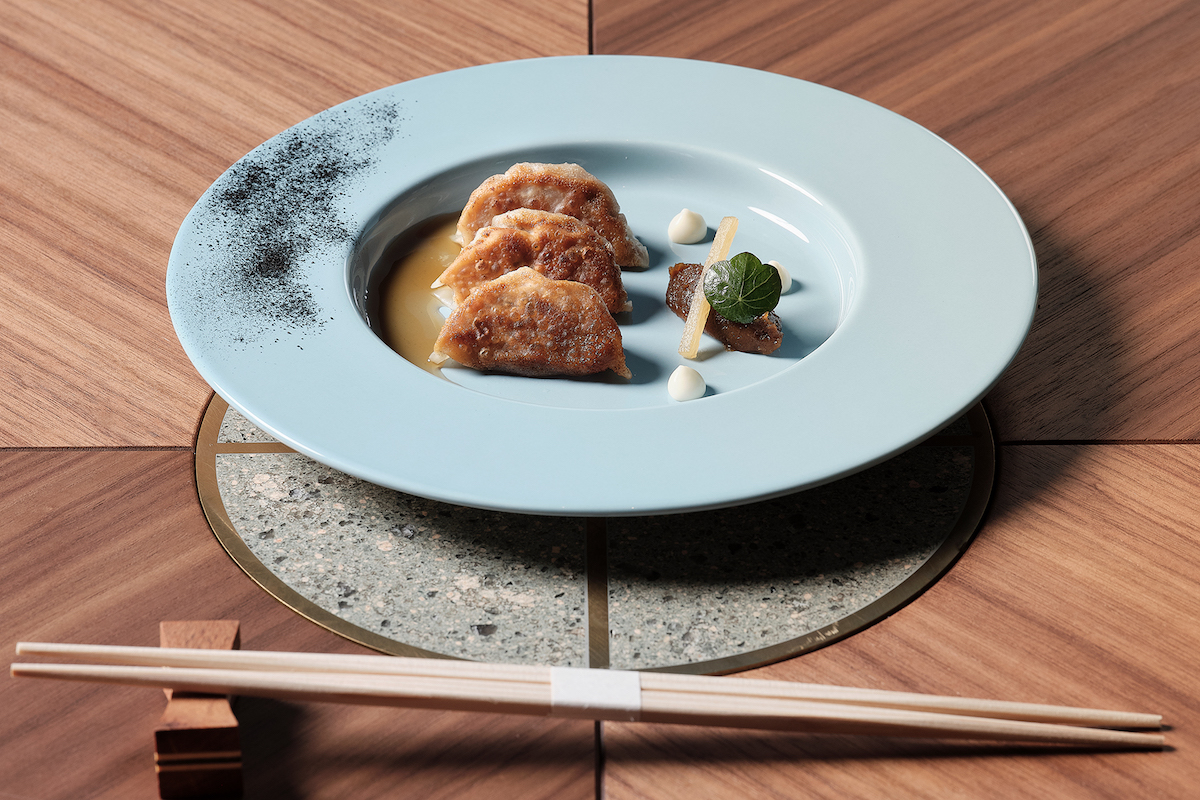 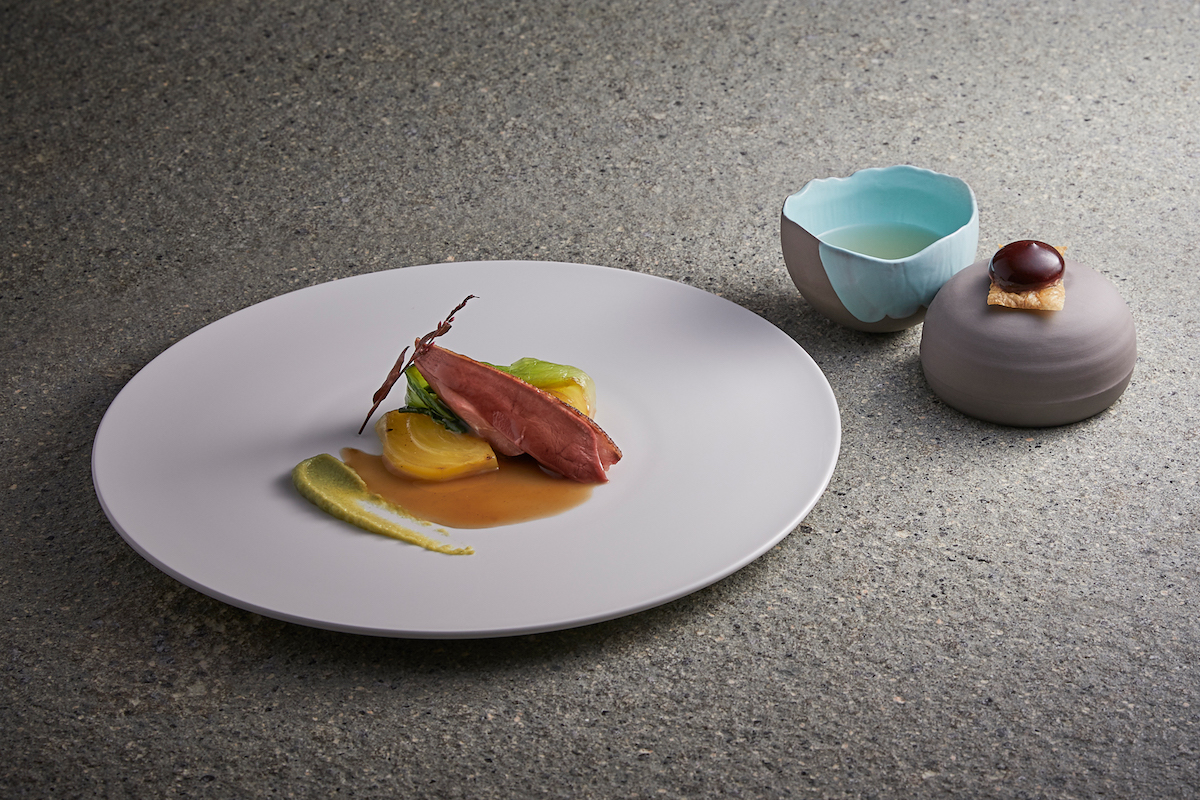 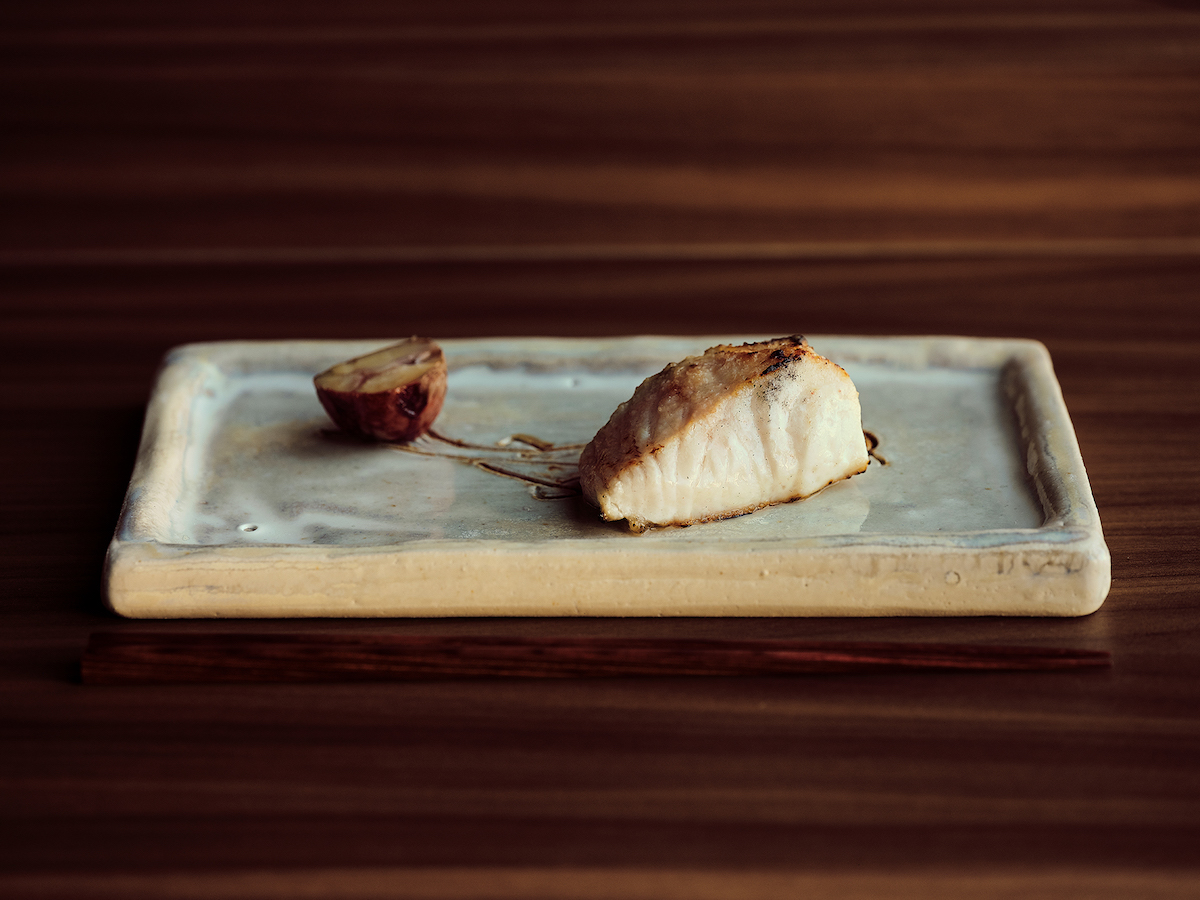 or this space Maurizio Lai designed a small, cozy 8-seat room: the bar is made of Canaletto walnut, with the countertop and dishes in polished grey-green porphyry with thin brass inlays. The seats are made of natural leather on a black elm structure, while the entrance wall features Canaletto walnut brise soleil hat offer a peek at the gourmet restaurant. Sitting at the table at the sushi bar one can enjoy the view onto the Vertical Forest by Stefano Boeri and the Library of Trees by Petra Blaisse / Inside Outside. 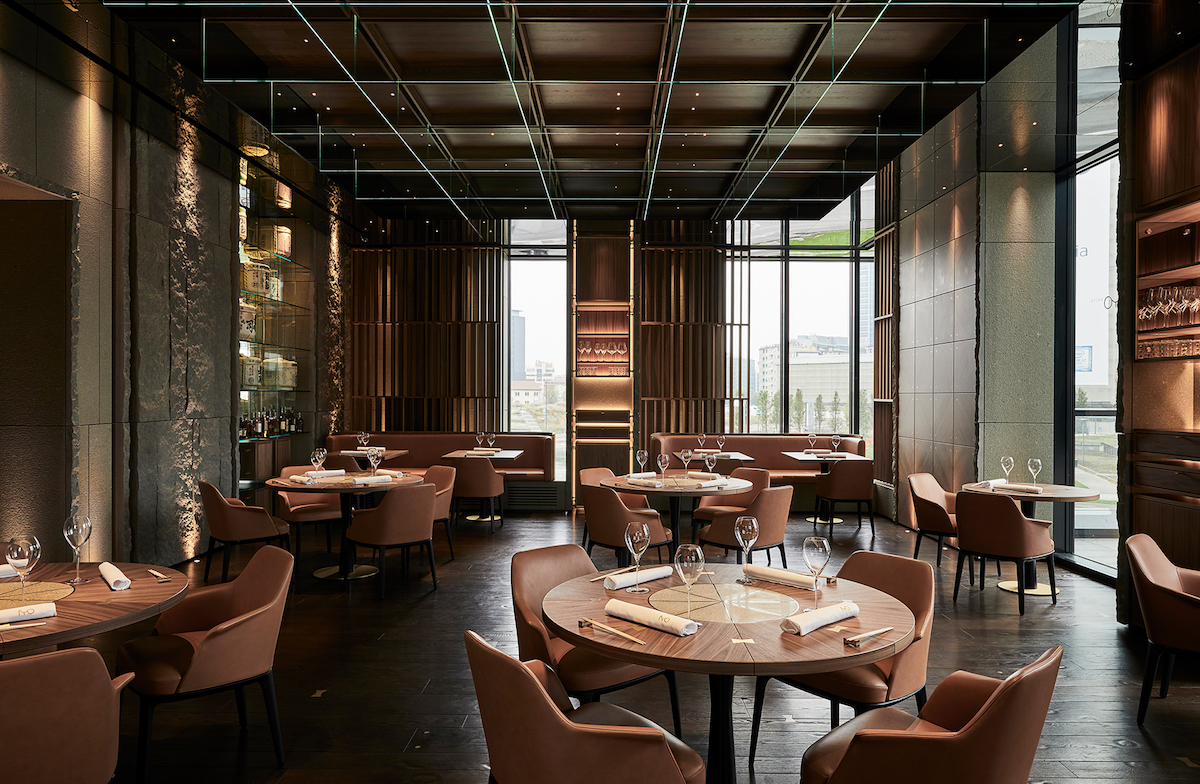 At the gourmet restaurant, which offers a contemporary vision of Japanese cuisine, we find chef Domenico Zizzi, originally from Apulia. As a young man, he had several experiences in his home country before departing for Germany, France, Thailand and Japan. In Tokyo his talent was appreciated by figures such as Carme Ruscalleda and Heinz Beck. After five years he returned to Italy to work at IYO Aalto, where he expresses his creativity in dishes that interpret a balanced synthesis between the Asian and European gourmet cultures. The dishes he offers include the Calamaro Fukuoka, the Piccione Viaggiatore and more.

The search for an essential , yet engaging language , and the choice of a natural, almost living material as the dominant element, inevitably led the conception and construction of the space to converge with the culinary concept

There are 38 seats in the gourmet restaurant, for which the designer has created a warm and welcoming shell in which all the surfaces are panelled in Canaletto walnut, and the ceiling features strips of float glass in a contemporary reinterpretation of coffered ceilings. The three wood cabinets along the walls – which repeat some of the recurring details and materials of the project, such as the brass screws and the glass – give order to the space. Custom-designed, they are surrounded by a rabbet joint that makes them look suspended from the ground. 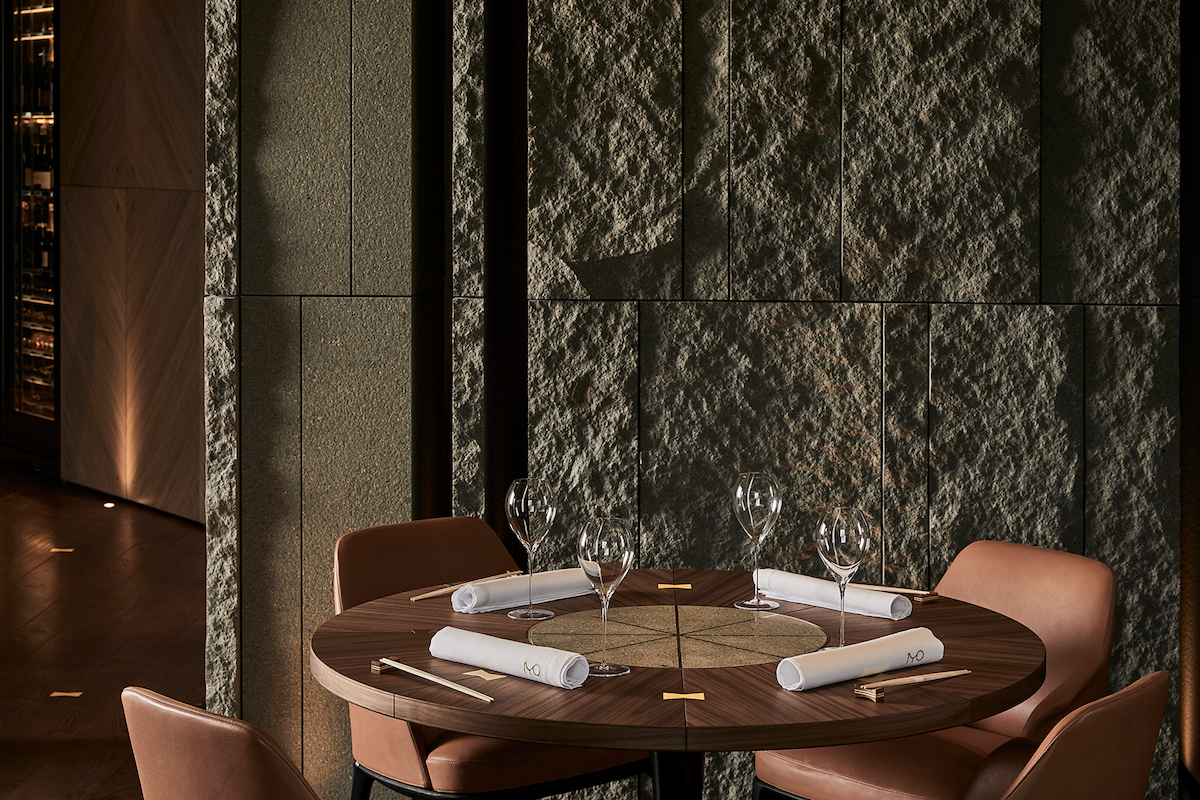 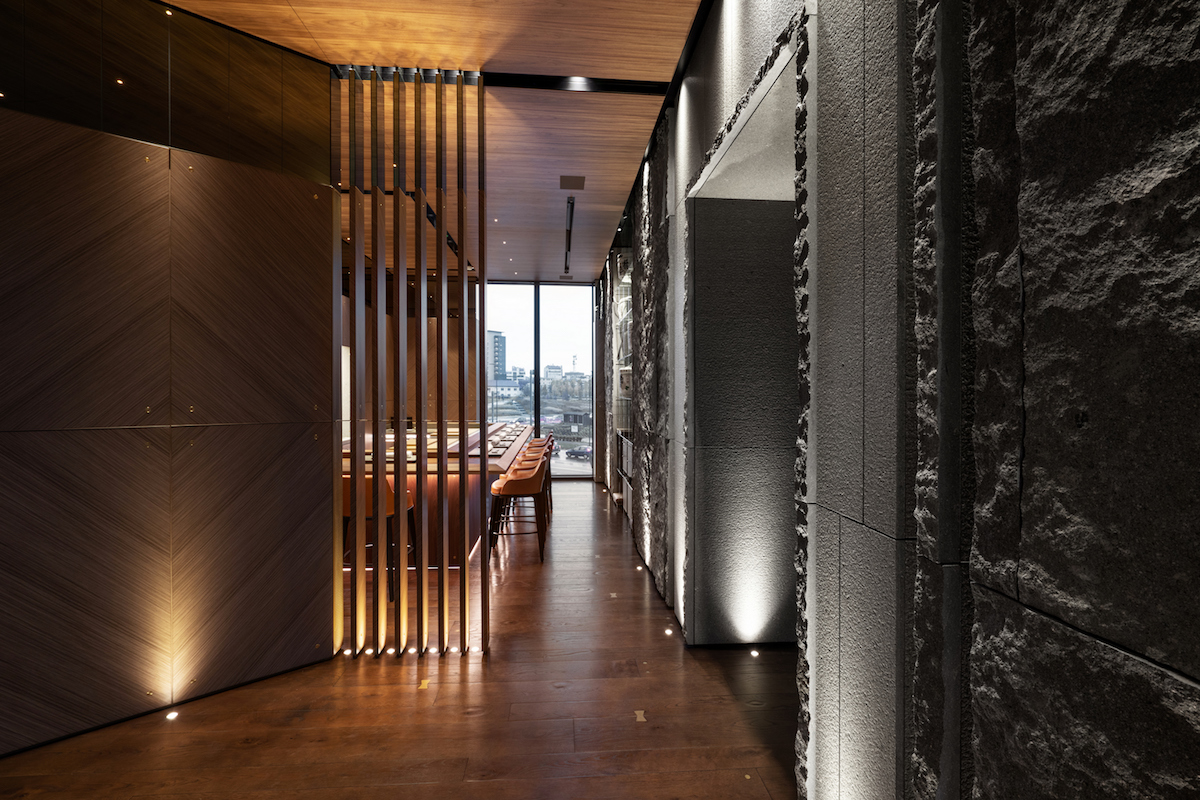 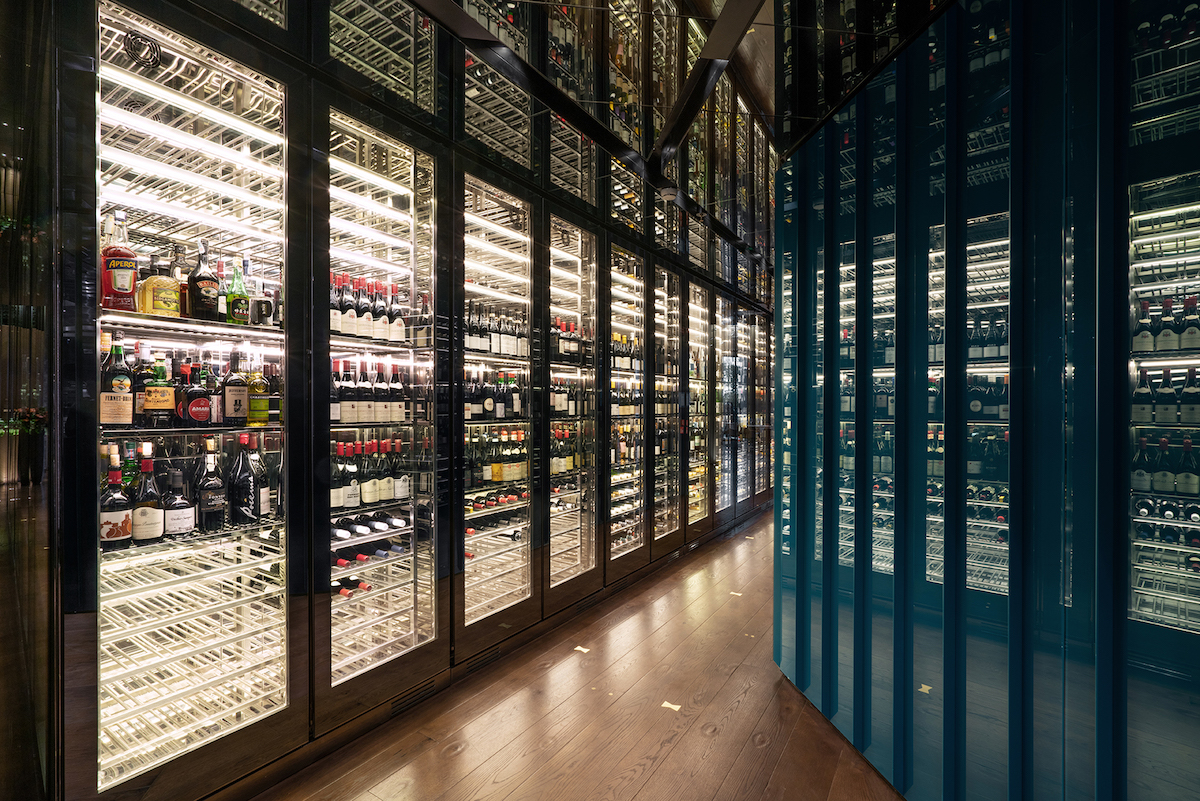