From inside the major Italian railway stations, and after settling in the heart of Rome, the restaurants of the “VyTA” chain have now come to London, the first international location for the project promoted by Nicolò Marzotto, he owner of the brand. The exclusive location is Covent Garden, in the lively West End district, filled with museums and theatres and animated today by artists, craftsmen and creative professionals from every part of the world.

A unique venue for an equally special challenge: to promote a new style of fine food nurtured by the constant interaction between the quality of the food and wine selection, and the architectural design that greets its patrons. This is the aim of Marzotto, who is also the co-owner of the “Santa Margherita Gruppo Vinicolo”, and to achieve it at the highest level of quality, he called upon Daniela Colli, who has designed almost all the spaces and restaurants of “VyTA”, from Rome to Florence, Milan and Turin, from Venice to Bologna and Naples, and now London. She recently won the Big See interior design award 2019 in the hospitality category for “Liòn”, the Roman restaurant and cocktail bar.

«VyTA will be an unexpected presence in high-transit spaces that will mainly target women, explains Marzotto. Our expansion abroad is fundamental for the brand’s visibility and to gather international know-how and best practices, in terms of quality and service, which will also contribute to growth on our national market. London has global visibility and represents the first indispensable destination for a brand that wishes to expand at the international level». 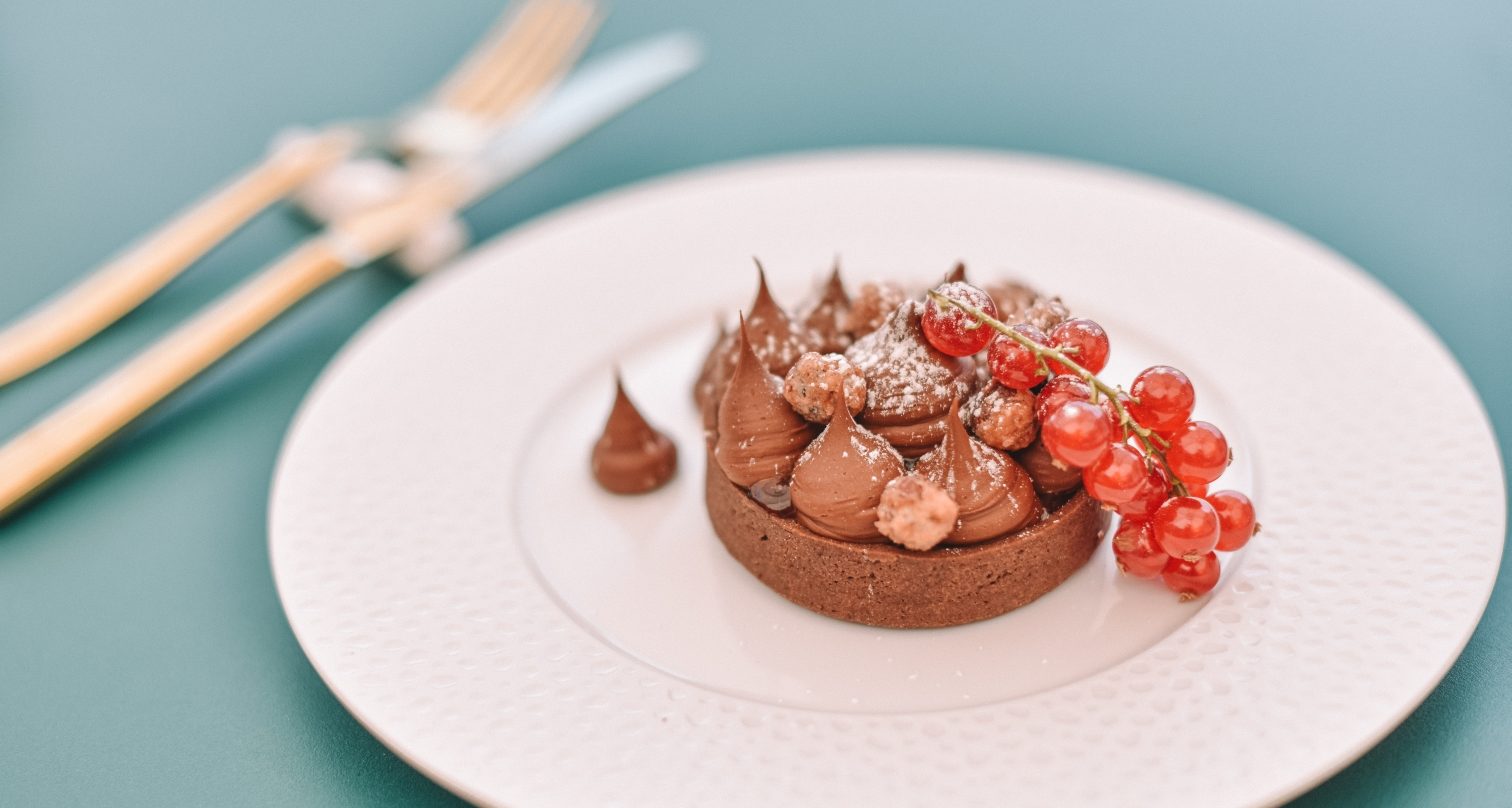 Another protagonist of the project is Dino De Bellis, the executive chef of “VyTA Covent Garden” and “VyTA Enoteca Regionale del Lazio”, as well as a teacher at important cooking schools and a chef on many television programmes. He was formerly a consultant for various restaurants in Rome, and a chef at the “Antica Osteria Incannuciata” in the city, where he won the Gambero Rosso’s del Quality and Purity Award in 2007.

Pantografo asked him about his cooking philosophy: «My cuisine does its best to respect the raw materials, most of which come from Italy. Having grown up in the country around Rome, I always include vegetables, which I enhance in every dish, sometimes creating enjoyable and unusual combinations». Add to it a method that blends tradition and modern techniques, and a human dimension that is expressed in the cohesion between the kitchen staff and in «the fun that the chef has, which makes the dishes taste even better», concludes De Bellis.

The main recipes include the Shrimp carpaccio with crunchy vegetables and burrata from Andria, L’autunno (cream of Mantua squash, mushrooms, hazelnuts and figs), Risotto of beets, gorgonzola and cooked must, , the Pig in the forest e, and, to end with the desserts, Strawberry tartare on apple and celery cream and Amalfi lemon ice.

While De Bellis’ dishes gratify the palate, the sense of aesthetics is fulfilled by Daniela Colli’s warm colourful and exciting design. 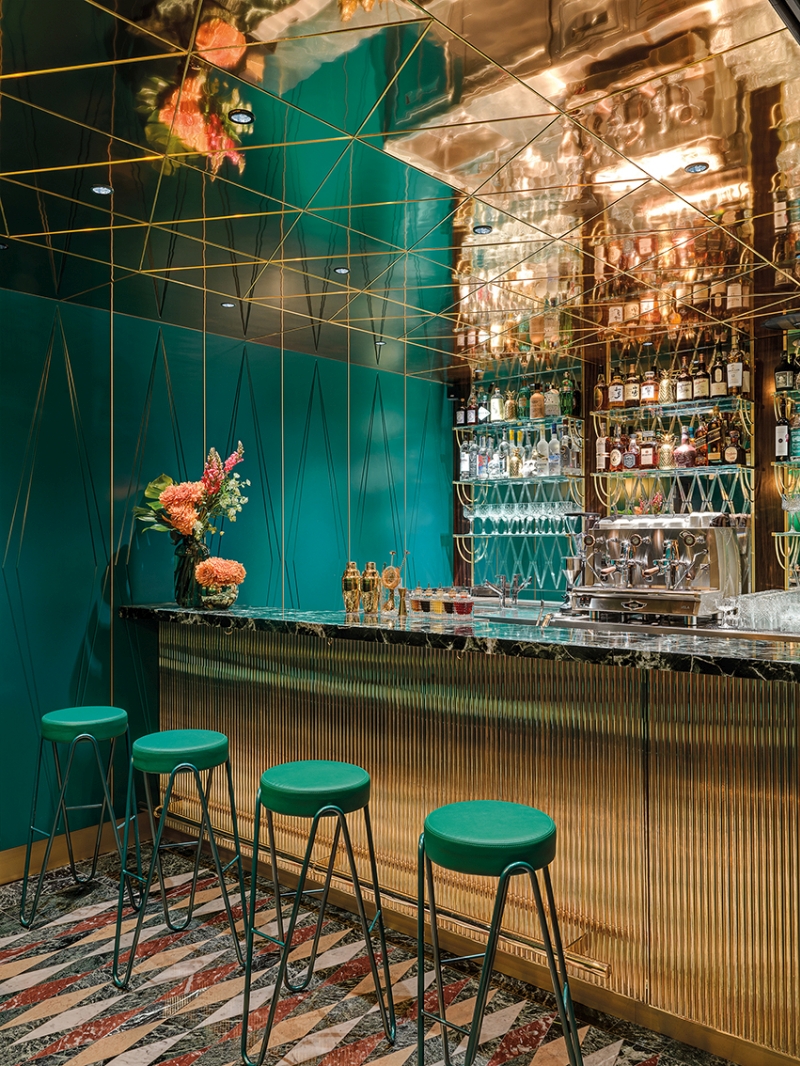 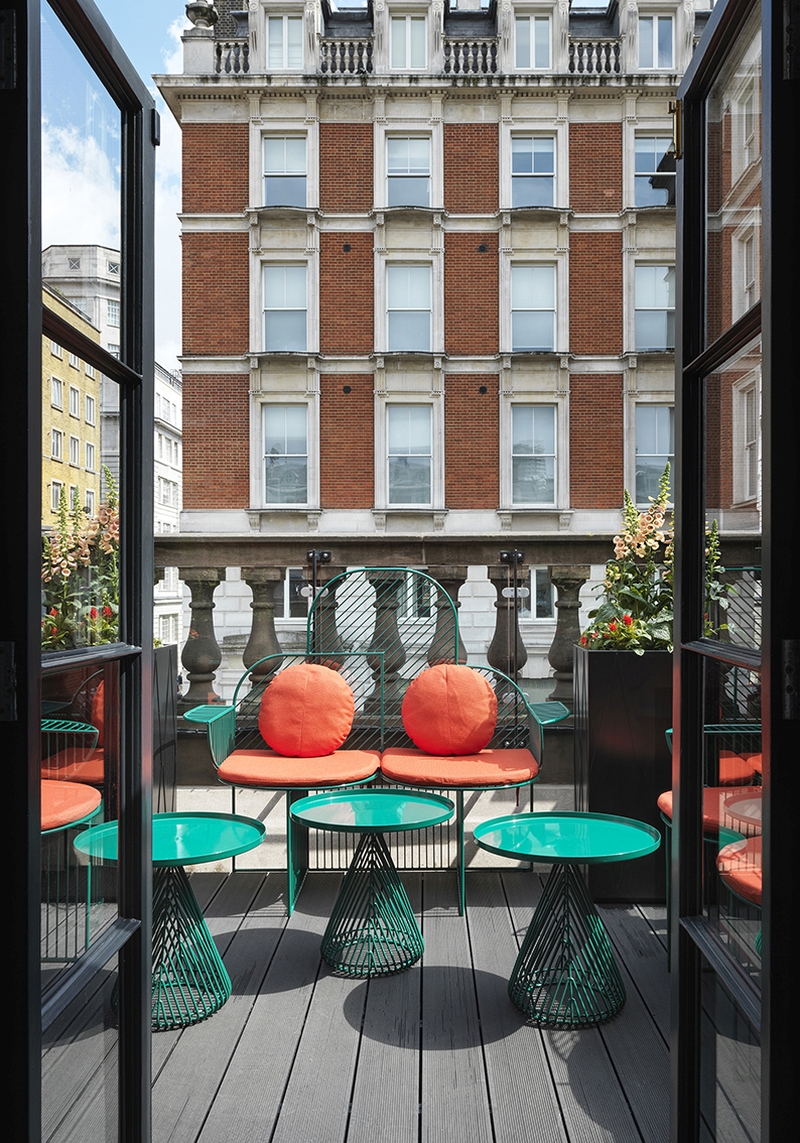 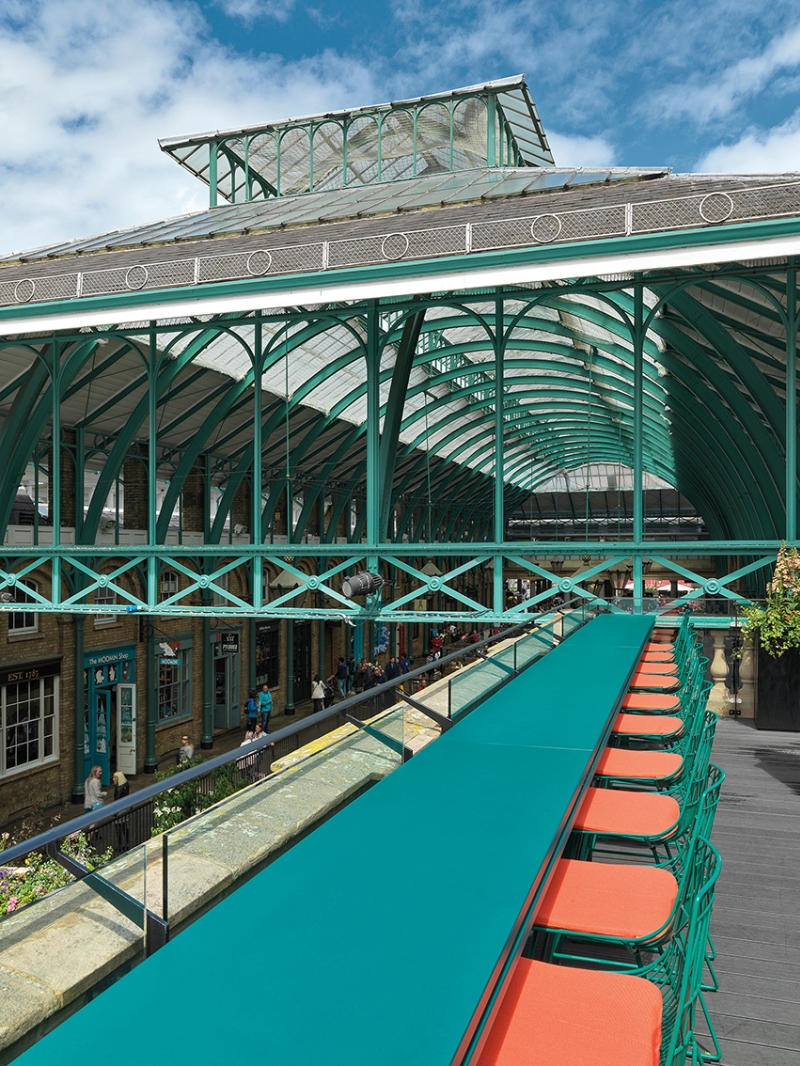 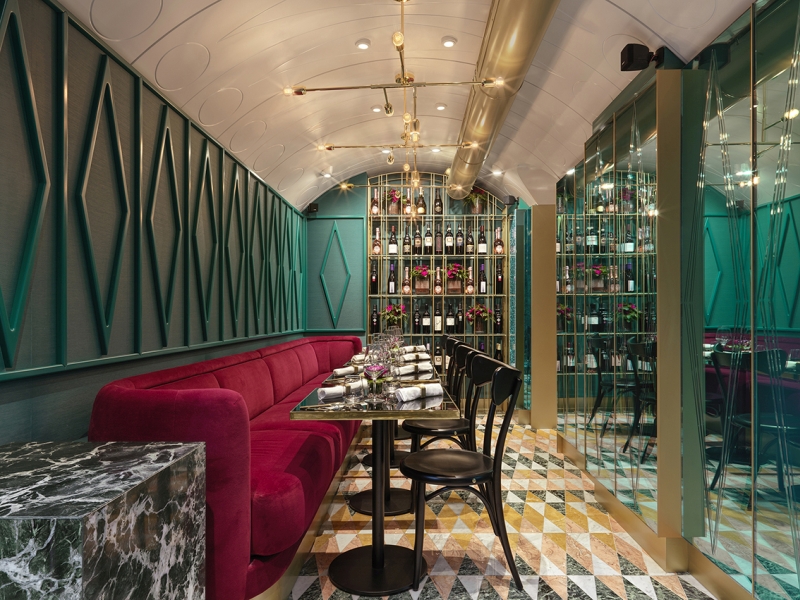 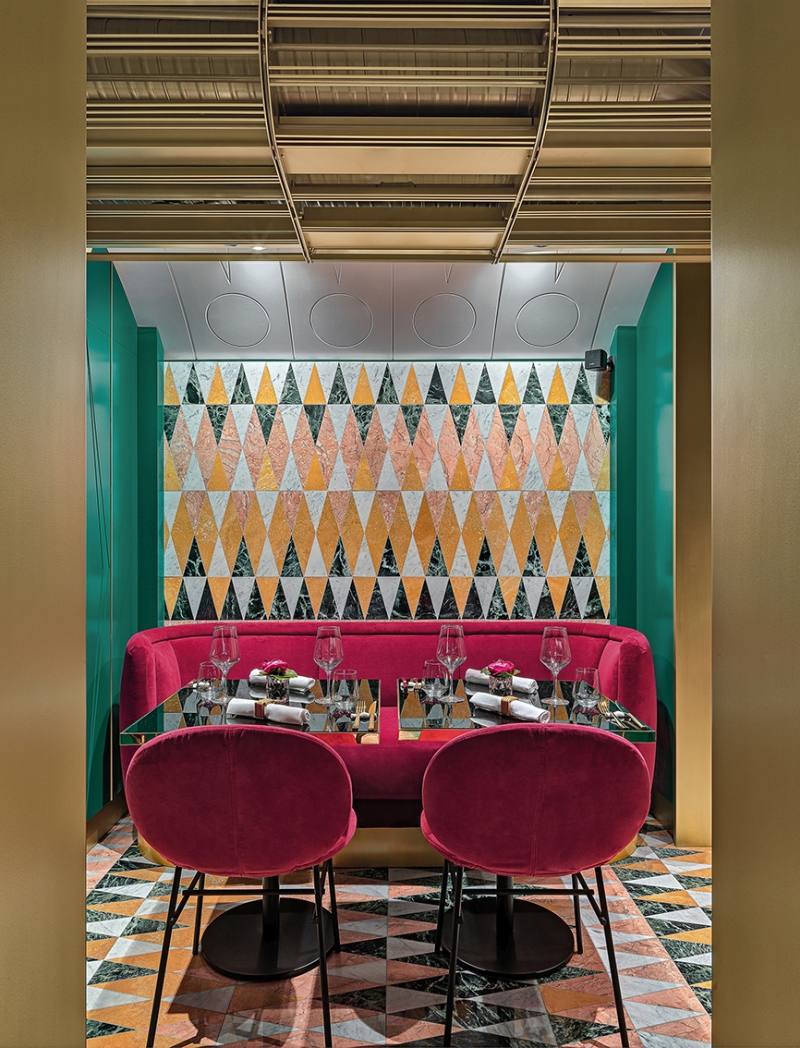 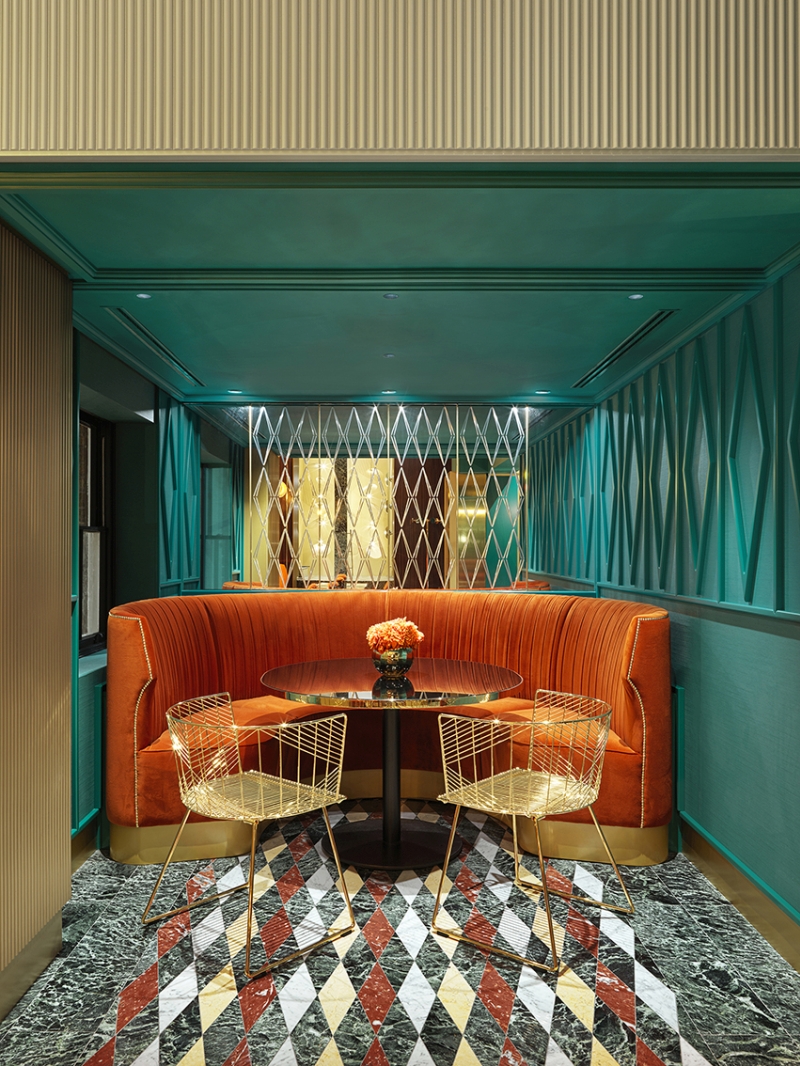 Building on a contemporary approach, the architect draws her inspiration from a language that was fashionable in the 1960s, and has now come back. «Interior design borrows with both hands from the Italian architectural culture of the Sixties, says the designer, learning from the refinement of its constructive and decorative details, the conception of the space as the stage setting for existence, the blend of elegance and irony, the geometric stylization».

Located in the eastern tower of the Covent Garden market, “VyTA Covent Garden” (restaurant and cocktail bar) is arranged on three floors, with terraces on the upper floor where the lounge bar will be located. Passing through a Victorian Style glass wall, you come into a vestibule where a staircase with rosewood steps, the heart of the historic building’s restoration project, winds continuously down along a green Alpi marble wall that visually and physically connects the different levels. The stairwell is papered entirely in gold wallpaper.

The lower floor is a triumph of vaults painted white with a décor of diamonds and circles, intimate niches surrounded by walls that are also painted, with friezes and mirrors that make the space look bigger, and furniture upholstered in soft maroon and peony pink velvet.

The main dining room is dominated by mirrors and materials such as rosewood brass and velvet again. The cocktail bar features polished brass railing and marble. 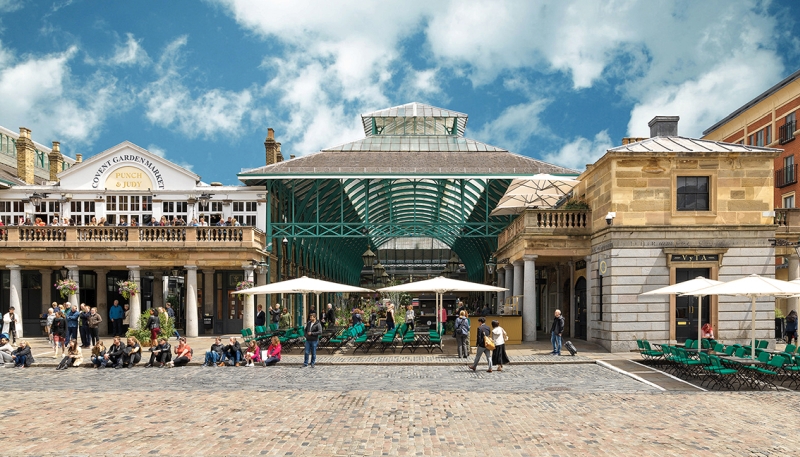 There is also a dehors facing the square, designated as the “VyTA Garden”, «a sort of urban oasis in which to take a pause from the frantic pace of the city» concludes the architect who, once again, in this wonderfully brilliant project confirms her vocation for spaces filled with energy and suggestions, which aim to stimulate dreams and emotions.